Researchers at the University of Newcastle in the UK have created a new kind of concrete glue that can patch... 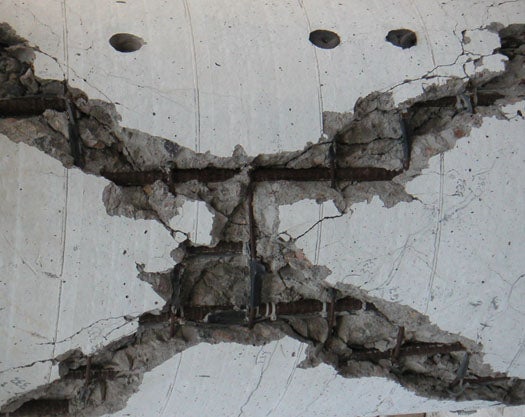 Researchers at the University of Newcastle in the UK have created a new kind of concrete glue that can patch up the cracks in concrete structures, restoring buildings that have been damaged by seismic events or deteriorated over time. But the glue isn’t an adhesive or some kind of synthetic material; the researchers have custom-designed a bacteria to burrow deep into the cracks in concrete where they produce a mix of calcium carbonate and a special bacteria glue that hardens to the same strength of the surrounding concreate.

“BacillaFilla,” as the researchers call it, is a genetically modified version of Bacillus subtilis, a bacteria commonly found in common soil. The researchers have tweaked it’s genetic properties such that it only begins to germinate when it comes in contact with the highly-specific pH of concrete. Once the cells germinate, they are programmed to crawl as deep as they can into cracks in the concrete, where quorum sensing lets them know when enough bacteria have accumulated.

That accumulation lets the bacteria know they’ve reached the deepest part of the crack, at which point the cells begin to develop into bacterial filaments, cells that produce calcium carbonate, and cells that secrete a kind of bacterial glue that binds everything together. Once hardened, the bacteria is essentially as strong as the concrete itself, restoring structural strength and adding life to the surrounding concrete.

The bacteria also contains a self-destruct gene that keeps it from wildly proliferating away from its concrete target, because a runaway patch of bacterial concrete that continued to grow despite all efforts to stop it would be somewhat annoying. The researchers hope their BacillaFilla will improve the longevity of concrete structures, which can be environmentally costly to erect. It could also be deployed in earthquake stricken zones to quickly reinforce damaged buildings and reduce the number of structures that have to be razed after a disaster.