130 Feet Above the Amazon Rainforest, Scientists Sample the Last Pristine Air on Earth

The full ramifications of the Industrial Revolution on this planet may never be known, not because the scope of the... 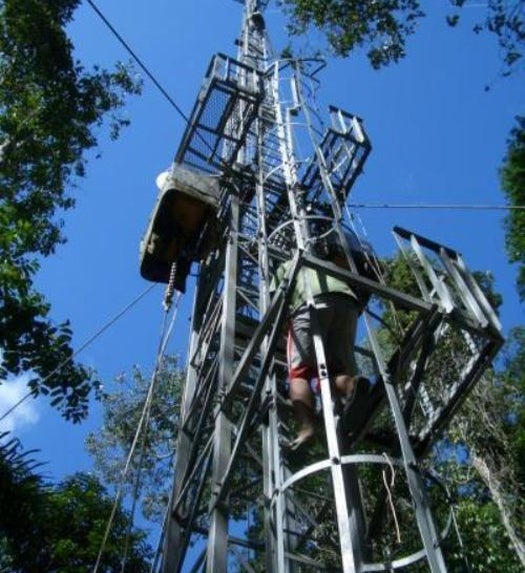 The full ramifications of the Industrial Revolution on this planet may never be known, not because the scope of the those changes can’t be measured but because the same rapid, spastic technological changes that hurled industry forward into a new era did the same for science. As such, pre-industrial science didn’t possess many of the instruments and technologies that allow modern science to happen. So how do you, say, find out what air quality was like before the Revolution wrecked it? You climb up into the canopy in the remotest part of the Amazon rainforest and take a deep breath.

That’s exactly what an international team of researchers recently did in order to get a sample of what air was like before human activity crowded it with particulate pollution. Deep in the Amazon Basin of Manaus, Brazil, the team climbed up 130 feet into the air to find pristine air that had blown two days’ travel away from the nearest contaminating sources. This is where the atmosphere is thought to most closely resemble pre-Revolution conditions.

It was the first time anyone has ever captured unblemished aerosol particles in this way, and what the researchers found was surprising. For starters, droplets created from the oxidation of plants made up something like 85 percent of the particles in the air. That’s basically opposite the way it is in industrialized atmospheres. Which basically means the way these droplets interact with aerosols in unadulterated environments could be completely different than scientists have always thought.

Moreover, and perhaps not as surprising, the researchers found just a few hundred particles per cubic centimeter of pre-industrail air. In industrialized areas of the world, that number is usually more than 10,000. Which means when we measure changes to atmospheric conditions in our cities and measure them against the earliest (but still post-Revolution) particulate counts that we have, we’re not really getting a good reading, but one diluted with a lot of particulate noise.

Put another way: we’ve already got so much foreign stuff in our industrialized urban air that it’s very difficult to keep tabs on changes in atmospheric conditions. But having our first look at untouched aerosols should pave the way for better models of the water cycle and the effects of atmospheric pollution on global climate change.