Highways basking in the hot sun are wasted energy. Scott Brusaw's solution? Make them out of solar panels 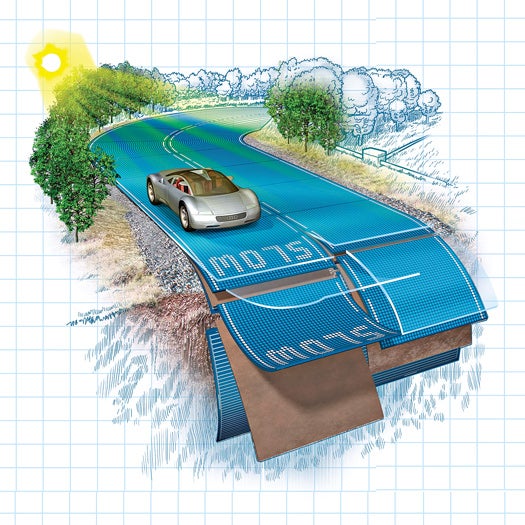 The road ahead is paved with photovoltaics. That’s how Scott Brusaw sees it, anyway. His company, Solar Roadways, is embedding PV cells and LED lights into panels engineered to withstand the forces of traffic. The lights would allow for “smart” roadways and parking lots with changeable signage, while the cells would generate enough energy to power businesses, cities and, eventually, the entire country.

Each 12-by-12-foot Solar Roadway panel would produce about 7,600 watt-hours a day, based on an average of four hours of sunlight. At that rate, a one-mile stretch of four-lane highway could power about 500 homes. “If we could ever replace all the roads in the U.S., then, yeah, we would produce more electricity than we use as a nation,” says Brusaw, an electrical engineer who completed his first prototype panel in February with funding from the U.S. Department of Transportation.

Brusaw’s goal is to get the cost per panel under $10,000. That’s roughly three times the cost of asphalt. But he wants to make panels that last three times longer than asphalt roads, which have to be resurfaced every 10 years in many places. “Then the cost is about the same,” he says. “But that’s just a break-even. We’re also generating electricity.”

The key to commercial viability will be the panels’ glass. It must be textured for traction, embedded with heating elements for melting away ice and snow, and able to survive years of traffic. “The toughest is going to be that fast lane on the highway,” Brusaw says, “where you’ve got a 40-ton truck, maybe with snow chains. It will have to be able to withstand all that.” At the same time, it has to be self-cleaning if sunlight is to reach the PV cells; Brusaw points to experimental hydrophilic glass that uses sunlight to break down organic dirt, and rainwater to wash it away without streaking.

Next up for Solar Roadways will be qualifying for Phase II funding, a two-year, $750,000 deal to develop a commercial plan for the panels. At the end of those two years, Brusaw would like to be ready for testing in parking lots, which he sees as the perfect proving grounds for the lights and the power-generation system. Directional arrows and parking lines could be reconfigured to deal with busy times, and the electricity generated could feed adjacent businesses. “I talked to the guy in charge of power for Wal-Mart,” Brusaw says. “Superstores are roughly 200,000 square feet, and parking lots are about four times that. I crunched the numbers for an 800,000-square-foot lot and told him how much power it could generate even if it was completely full of cars. It was 10 times the power they use.”

Brusaw wants to start smaller, though—on the scale of, say, a fast-food restaurant. A McDonald’s retrofitted with a solar parking lot could take itself largely or entirely off the grid or become a site for recharging electric vehicles (while the owners stopped inside for food, naturally). “Even the best electric cars have a range of about three hours,” he explains. “But if all I have to do is find a McDonald’s, I could drive from Idaho to the southern tip of Florida.” Improbable? Yes. But “Billions of watts served” would be a cool new tagline.

Josh Dorfman is the author of The Lazy Environmentalist: Your Guide to Easy, Stylish Green Living