Sometimes you’re just at the right place at the right time. Astronauts aboard the ISS experienced just such a moment... 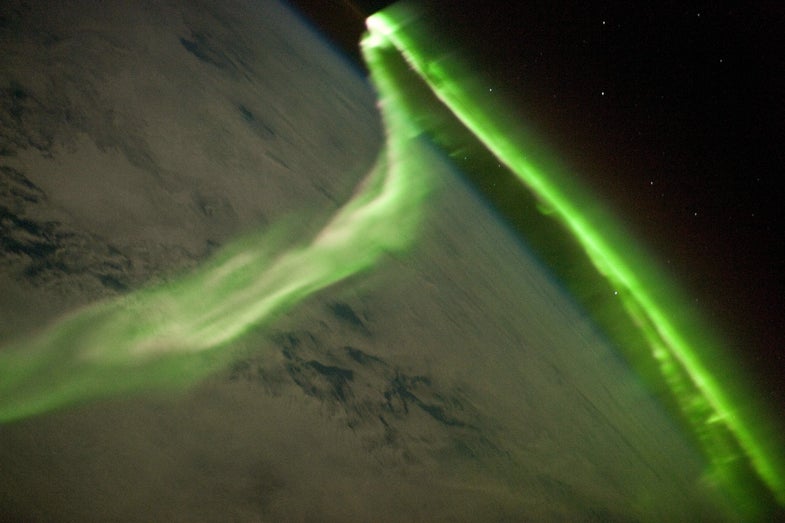 Sometimes you’re just at the right place at the right time. Astronauts aboard the ISS experienced just such a moment when they captured this captivating image of a rare aurora australis over the Southern Indian Ocean likely caused by a coronal mass ejection from the sun late last month.

The auroras — aurora borealis near the North Pole, aurora australis near the South Pole — are one of the atmosphere’s most beautiful phenomena, occurring when energetic ions from the sun collide with oxygen and nitrogen in the upper atmosphere, temporarily exciting those particles such that they emit light as they return to their normal states. This particular ribbon of ion activity appears green, the result of excited oxygen atoms at wavelengths near 0.558 millionths of a meter. Other wavelengths produce red, blue, or purple hues (you can see a little bit of red left of center).

This particular aurora is unique in the sense that it was spotted fairly far away from the South Pole over the southern Indian Ocean, likely as a result of a large ejection of energy that burst from the sun on May 24. The photographer is looking south toward Antarctica, though you can’t see the southernmost continent in the photograph. The ISS orbits at around 220 miles, while the aurora was located somewhere in the ionosphere between 60 and 190 miles above the planet’s surface.