Because terrorists rarely announce the technical details of their nefarious intentions beforehand, the threat posed by weapons of mass destruction... 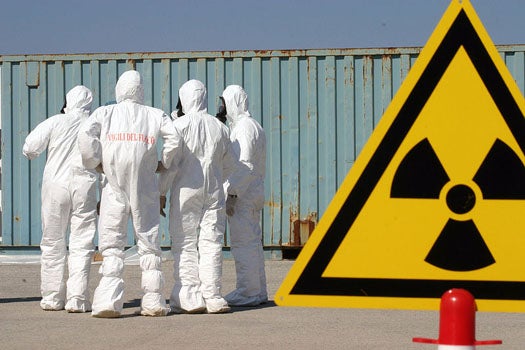 A versatile material that neutralizes a range of biological and chemical agents could save time and lives in the event of a terrorist attack or accident.
SHARE

Because terrorists rarely announce the technical details of their nefarious intentions beforehand, the threat posed by weapons of mass destruction is not only great, it’s multifaceted. So a team from the McGowan Institute of Regenerative Medicine has synthesized a polyurethane fiber mesh that is as variable as the terrorist threat. By mimicking biological tissues like the skin that respond to shifting environments, the a multifunctional polymer can decontaminate a range of both biological agents and chemical toxins.

Most biological and chemical weapons countermeasures are threat-specific, dealing with one particular agent or another. This new polymer mesh contains enzymes that catalyze the production of bromine or iodine, which are deft killers of a range of bacteria. But it also contains chemicals that spur the production of nerve-agent-detoxifying compounds, making the polymer equally efficient at neutralizing chemical threats.

The mesh itself is versatile as well; the researchers think they can develop it into coatings, liquid sprays, sponges and even medicines that can be used to counter bacteria, viruses and spores. The decontaminants also work in tandem without interfering with each other, meaning that even during a multi-pronged attack the materials could counter a host of threats simultaneously.

In the event of a biological or chemical attack, first responders could don suits made of decontaminating materials, set up triage tents made of the threat repelling stuff and even douse people, buildings and outdoor areas with liquid antitoxins to quickly contain and eradicate offending agents. What’s more, its ability to neutralize a range of threats means that emergency personnel could act first and ask questions later, saving valuable minutes — and lives.