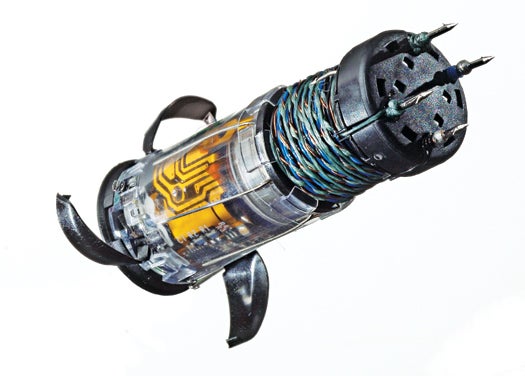 It’s midnight. You’re a cop patrolling the wrong side of town when you spot a mugging. The assailant is about 40 feet away, out of range of your stun gun. You shout, but he darts down an alley. It’s a dead end. The crook picks up a bottle, hurls it at your head, and makes a break for the street. You draw your gun.

And so goes the “capability gap,” one of the trickiest situations in law enforcement. For an officer in the field, this is a danger zone spanning 35 to 65 feet in which an assailant is beyond the range of Tasers and yet near enough to throw a deadly object, pushing an officer one step closer toward the use of deadly force. “Plain and simple, we need a less lethal option that works within throwing range,” says Sid Heal, a retired commander with the Los Angeles sheriff’s department and a consultant to the U.S. Department of Defense.

That’s where the Extended Range Electronic Projectile, or XREP, comes in. Unlike Taser’s conventional stun gun, which shoots tethered probes up to 35 feet to deliver an incapacitating jolt, the company’s new XREP is a 12-gauge wireless projectile that can be fired up to 100 feet from any pump-action shotgun. It sails through the air like a normal slug yet induces muscle paralysis on impact. “It takes everything that’s a Taser and puts it in a slug-like device,” Heal says.

Logistically, the biggest engineering challenge was miniaturization. With a Taser, two probes attach to the assailant, arcing up to 50,000 volts of electricity, enough to penetrate clothing. The XREP, on the other hand, uses just 500 volts to allow for smaller circuitry. Instead of arcing the current, it sends it directly into the body via barbed electrodes that pierce the skin. Lead XREP engineer Mark Hanchett says the key isn’t so much the voltage but the waveform. The current, shaped to mimic electrical signals in the body, jams the nervous system. “The waveform is the secret sauce,” he says.

Since its debut last year, the XREP has been fired successfully four times in the line of duty. Taser is now working on a grenade version for the Department of Defense that will be capable of launching up to 200 feet. That tricky capability gap? Consider it bridged. 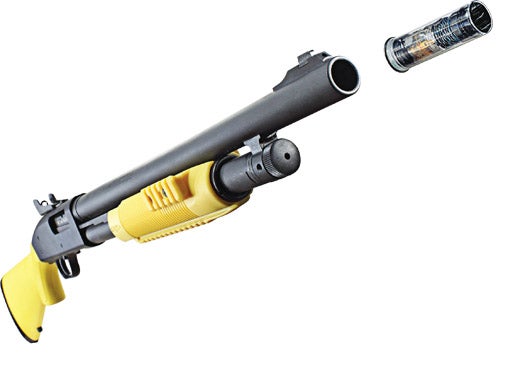 Each 12-gauge “bullet” is designed to fire from any pump-action shotgun.

Nose: On impact, four electrified barbs on the nose of the projectile hook into the skin, delivering a small, localized shock across a six-inch area. This is merely a prelude to the bigger shock that will soon follow. The force of the impact breaks a series of pins that allow the projectile’s chassis to separate from the nose and dangle downward from a live copper wire.

Barbs: If the assailant fails to grab the wire to complete the circuit, six longer barbs on the projectile can also penetrate the skin. With the plastic sheathing removed on impact, the half-inch electrodes—called “chollas,” after a fierce cactus plant native to Arizona’s Sonoran Desert—pop out like spikes and swing into the body.

Hand Trap: The assailant’s natural instinct is to grab the dangling wire and rip out the barbs, but the wire is pulsing with current—touching it allows electricity to flow from the first set of electrodes in the nose of the projectile to the assailant’s hand, which contracts from the shock and squeezes tight around the wire so he can’t let go. Electricity now freely flows through his body, causing about 20 seconds of paralysis.

Fins: When the slug leaves the shotgun, three fins deploy from its tail, helping the projectile stay on track as it sails up to 100 feet toward its target.

Transformer: This converts energy from the battery to discharge 1.3 milliamps of current for 20 seconds. The power is relatively weak; in comparison, a wall outlet delivers about 20 amps. More important is the way the current propagates and interacts with electrical signals in the body. “If you get the waveform right, you can overwhelm the nervous system,” says Taser engineer Mark Hanchett.

Microprocessor: Once the circuit is complete, an onboard computer commands the voltage capacitor to fire, modulating the intensity, duration and shape of the current.

Shell: The circuitry is potted inside shock-absorbing plastic to ensure that it survives the force of the shotgun blast and collision with the target.