Is this a bright idea? 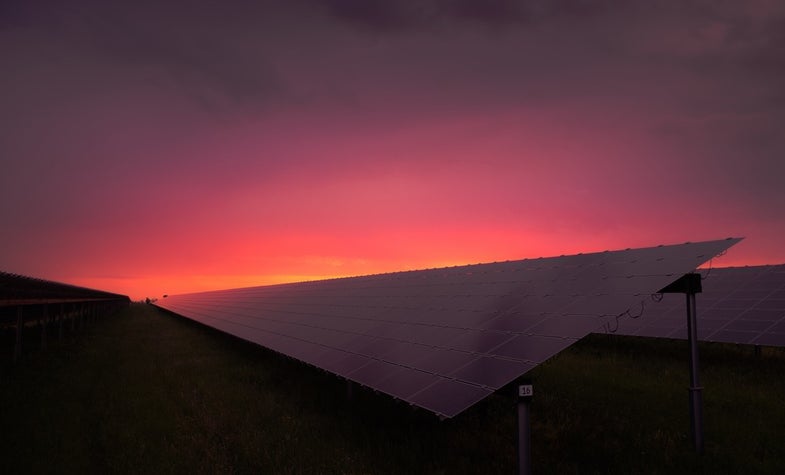 On Wednesday, President Trump added a new descriptor to the wall he’d like to see built along the United States’ southern border. Speaking at a campaign rally in Cedar Rapids, Iowa, the president said, “We’re thinking about building the wall as a solar wall, so it creates energy, and pays for itself. And this way Mexico will have to pay much less money, and that’s good. Is that good?”

While this may be the first time that Trump has stated this vision of the wall publicly, the publication Politico wrote that Mr. Trump first floated the idea in a June 6 meeting with legislative leaders. But how would a solar panel border wall work?

Around 400 companies submitted designs for the 2,000-mile wall to the Department of Border Protections by the agency’s April 4 deadline. The proposed designs ranged from the humorous—a border wall of light houses—to the futuristic. The Ottra Nation’s design, for example, is comprised of a Hyperloop transit system, and was more of a vision for “the World’s First Shared Co-Nation between Mexico and the United States” than an actual wall.

The request for proposals included specifications such as, “the wall design shall be physically imposing in height,” and “the north side of wall (i.e. U.S. facing side) shall be aesthetically pleasing in color,” along with some necessary aspects related to the wall’s telecommunication capabilities. But the call for proposals did not contain any solar energy requirements. In other words, the folks vying to design the wall didn’t know it was supposed to be chock-full of solar power. As a result few of the proposals that have been publicly released seem to contain any reference to producing solar energy. Of those that do, the most visible is that of Gleason Partners, LLC of Las Vegas.

“Back when Trump started running for president and he stated that he wanted to build a wall, I started to tell people that if he becomes president and there’s going to be a wall I’d like to design a solar wall,” Thomas Gleason, managing partner of Gleason Partners, LLC told PopSci. Gleason says that he designed the wall to show that solar can pay for itself. In his team’s design, the base of the wall is precast concrete that goes under the ground to give the structure stability. The next eight feet is made of a tight mesh fencing that can’t be climbed or hooked into. Above that, the wall’s solar features kick in: from eight feet up to 24 feet, Gleason says, the structure will be made of a “solar curtain wall”.

Let the sunshine in (and keep everything else out)

A solar curtain is like the glass used to build modern skyscrapers, but with solar energy producing capabilities built into it. Generally speaking, solar curtains produce less energy than traditional solar panels. But because they turn a necessary object—like a wall—into one that also produces energy, they’re usually an energetic win. In this case, the solar curtain would also be reinforced to make it impregnable.

At the top of the wall there would be a solar actuator connected to a 20-foot solar panel, which would produce two-thirds of the wall’s energy. The actuator would move the panels to allow them to track the sun along its daily trajectory from east to west. Looked at from the U.S. side, the solar panel would be vertical, with the electronics concealed inside aircraft-grade aluminum, “So that the Americans can’t steal the electronics inside the wall—you have to worry more about the Americans thieving than the Mexicans,” says Gleason, laughing and noting, “when copper prices get high in the U.S., people are out stripping the cables out of underground conduits between light poles and selling the copper.”

On the Mexican side, the solar panel would be angled—to balance the panel’s weight and take advantage of a better angle toward the sun in winter. In total, Gleason estimates that as designed his wall could produce 2megawatts, or enough to power between 500 and 1000 homes, for each mile of wall.

While some proposed designs—like the one from Clayton industries, which includes a 100-foot-deep trench with nuclear waste at the bottom—don’t seem to care if potential border crossers survive their encounter with the wall, Gleason is hoping that his will deter any potential crossers without actually harming them.

“My biggest issue when [the design specifications] went to 30 feet was that these kids who are climbers don’t get themselves killed,” says Gleason. “It’s as safe as it can be and still meet the criteria. They can’t climb it, there’s no place to stick a finger in.” Even if someone did manage to climb the first 24 feet, they would have to somehow reach another seven to nine feet to get to the lower edge of the tilted solar panel—and then somehow climb over that.

“Maybe [Mission Impossible] Tom Cruise could figure it out,” says Gleason with a laugh. More realistically, that’s the point where the kids would give up and slide back down into Mexico. “When they slide down there’s nothing that’s going to hurt them.”

The same, however, can’t be said for the region’s wildlife.

Energy efficient, but not environmentally friendly

Flesch has studied wildlife on the borderlands between the United States and Mexico for almost twenty years, and he’s found that the wall hurts animals—especially those whose numbers are already perilously low—by limiting connectivity. He finds the potential environmental risks of building a wall—even a solar wall—across the whole border to be quite troubling.

“It helps to think of habitats as little islands dispersed on the landscape with inhospitable lands around them,” says Flesch. “if animals can’t recolonize those islands because they can’t move through the environment between and among those little islands, then it can have huge destabilizing effects on the population.”

Take, for example, the pygmy owl, which many people assume will just fly up over a border. They actually tend to fly too low to the ground to clear the proposed wall; if they leave the confines of the tree canopy, they become vulnerable to aerial predators.

“They’re like little tiny barrels of wings with a lot of meat on them,” says Flesch. “So, they try to avoid Cooper’s hawks and red tailed hawks and gray hawks and ravens that will pick them off if they go into places where vegetation cover isn’t high.”

Faced with a wall that’s just out in the open, pygmy owls aren’t likely to cross—which is a problem if the best place for them to find food or cover is on the other side.

Gleason suggests that gaps of up to a foot, too small to fit most humans, could be placed in select parts of the fence to allow wildlife to pass. The problem with that is twofold, Flesch says. First, it doesn’t allow for bigger animals like jaguars, Sonoran pronghorn, and ocelots to pass.

“These are species of conservation concern that need to cross the U.S.-Mexico border to bolster populations in the United States, where they were once much more common,” says Flesch.

The other problem, notes Flesch, is that the impact goes beyond just the wall itself. “It’s also the vegetation clearing with the wall, it’s also the roadways that are associated with the wall,” he says “It’s also the patrols, the increase in human activity along the walls, and the lighting, which illuminates things at night when lots of critters depend on the cover of darkness to move safely between habitat patches.”

But Flesch is confident that at least one animal will continue to cross the border once the wall goes up: humans.

“People use tools. People go up over walls, they climb, they build ladders,” Flesch says. “Drug runners and smugglers can tunnel under the wall for the cost of one load, they do it all of the time.”

He’s not wrong. A 2014 study that looked at movements across the Arizona border wall found zero impacts on human movement, but significant impacts on puma and coati (a raccoon-like animal).

There are further concerns about what a wall could do to the region’s hydrology, or the passage of water throughout the region. And in the case of a solar wall, there’s the added hurdle of connecting it to people who can use the energy. We’d have to create additional infrastructure connecting the wall to the existing electrical grid, and it’s not clear where those funds would come from. In his statement, President Trump has said that building a solar wall would make the project less expensive for Mexico—but Mexican President Enrique Peña Nieto is on the record as stating that Mexico will not be paying for any of it.

Trump’s interest on solar has also left some scratching their heads. It comes on the heels of his decision to withdraw the country from the Paris Climate agreement, and along with much talk of pulling back from investments in renewable energy.

“I think it’s good that Trump comes back from Paris and a week later he says, I want a solar wall to pay for itself,” says Gleason. “He’s starting to recognize the green thing, I think.”