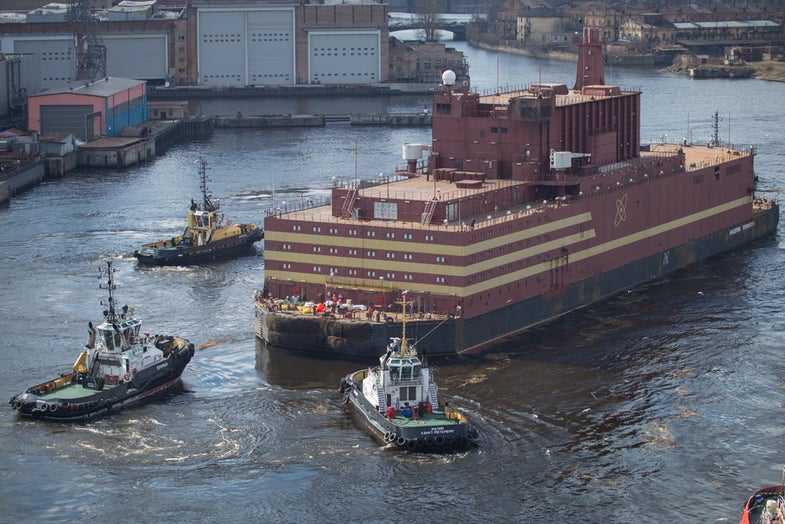 The world’s first commercial floating nuclear power station—a 21,500-metric-ton Russian vessel called the Akademik Lomonosov—is slowly making its way across the Arctic Ocean, on a multi-stage trip to its final destination in eastern Russia. People are not happy about it.

Environmental and nuclear watchdogs worry the station could hit an iceberg and sink while crossing the Arctic, spilling nuclear fuel into the fragile northern ecosystem. Or it could run aground, fouling the landscape, or be tossed by waves in a storm, or even—once installed in the remote coastal town of Pevek, 53 miles across the Bering Strait from Alaska—be attacked by terrorists or fail for any number of other reasons. One need only look at Japan’s Fukushima plant to see that water and nukes don’t always mix.

Nevertheless, the blocky power station now sits in in Murmansk, Russia, after being towed there from a Saint Petersburg shipyard where it was built. Workers in Murmask are now loading it with nuclear fuel. When it reaches Pevek sometime next year, it will commence its first mission: Providing power to the surrounding region of Chukotka, population 50,000.

The platform is to be the first of a series of floating nuclear power stations that will be introduced into the Arctic, explained Jan Haverkamp, a nuclear energy expert with Greenpeace. “This is in support of the further development of oil, gas, and coal extraction in that region,” he says. “This has now become more easily feasible because of the retraction of the ice due to climate change, and it will introduce increased nuclear risk in the region as well as increase carbon emissions.”

Due to a lack of transparency surrounding the project, this progress is ringing alarm bells anew among nuclear watchdogs. The most immediate concern is the vessel’s movement once fueled. Akademik Lomonosov is not considered a nuclear installation under Russian law until it’s actually moored and made operational in Pevek, says Haverkamp. As a result, Russia’s nuclear regulator has not overseen construction, testing, fueling, or transport of the ship from its home port to its final destination. “Insufficient regulatory oversight plays a role in most severe nuclear incidents,” he said, noting that Greenpeace has “demanded” that Rosatom, the ship’s manufacturer, and the Russian government allow the nuclear supervisory body, Rostechnadzor, access to the project. It has also requested peer review from international organizations.

Floating nuclear power plants face a variety of risks that ground-based stations do not. While seaworthy reactors themselves are not new—they’ve existed for decades in military ships and submarines—floating reactors generating the power levels of the Akademik Lomonosov, at 70 megawatts, are new, and the risks are higher. “On the ground, the orientations of the pumps, and valves, and pipes are all known,” said Dale Klein, a former head of the U.S. Nuclear Regulatory Commission. “Everything moves in a known direction. You don’t have the rocking and rolling like you do at sea, so you could have unusual natural events, like storms, where if the platform starts oscillating or flips on its side or goes upside-down. How do you make sure the reactor core does not melt?”

What experts like Klein want to know is how Russia executed its safety analysis for the project, including its susceptibility to events like security breaches and terror attacks. Those breaches can be more readily and stealthily executed stealthily from water than from land. Klein also wants to know how strong the containment system is for radioactive material. “When you design those systems on a ship, they have to be very heavy, but the ship’s designers want their vessels to be very light,” he said. “Those two concepts are in opposition, and one should ask how did Russia balance those.”

Russia, Klein noted, is not under any legal or international regulatory obligation to provide this information. During his own leadership of the NRC between 2006 and 2009, Klein says he noted a disconnect between Rostechnadzor, which strove to boost its regulatory capabilities, and the Russian government, which resisted such efforts.

“The fact that Rostechnadzor only has been able to visit to plant after pre-announcement and then only once a year is a severe concern for us,” said Greenpeace ’s Haverkamp. “It would be good if Rostechnadzor could get full access to the power plant, and also would once more go over all the documentation and have the mandate to give approval, or withhold it, on the basis of the safety case.”

Haverkamp also noted that beyond the risks such a station would pose at it’s mooring site, there are gauntlets of concern surrounding the fueling in Murmansk—a city with a population of 300,000 people—transportation, and refueling after 12 years of operation. “The transport is an almost 5,000 km voyage through potentially stormy weather in an area that also knows heavy ice,” he said. “Any Titanic-type scenario would be a nightmare, but also if the barge were to lose contact with the tugs and be thrown on the rocks. This could lead to emissions of radioactive substances into the environment. The even larger risk will be during transport back from Pevek to Murmansk, when the barge will be loaded with the spent nuclear fuel from 3 or 4 operation cycles.”

Though out of favor in the United States thanks to surges in the availability of natural gas and renewables like wind and solar power, nuclear power worldwide is thriving, Klein says. Multiple countries are pursuing commercial nuclear plants, with a new generation of small modular reactors being touted as potential niche players amid more diverse energy strategies. Akademik Lomonosov will replace an aging nuclear power plant in the area, as well as an electric station powered by coal—but the risks it brings with it may far outweigh the benefits if anything goes wrong.