What is a horsepower?

It's enough to power a coffeemaker or boil 2.2 gallons of water. 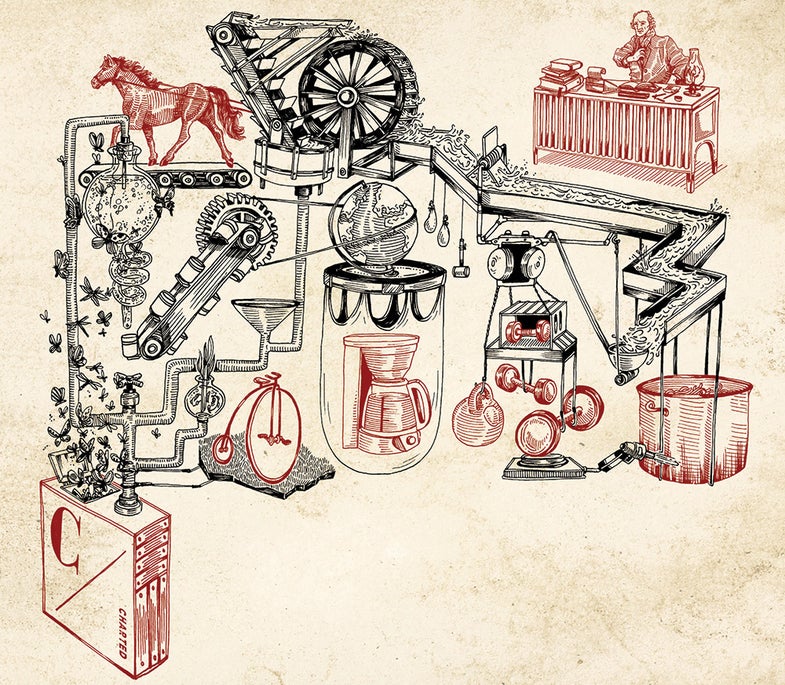 In 1781, the story goes, James Watt needed to convince skeptics to ditch their draft horses and buy his new steam engine. To prove his machine’s superiority, he measured a horse walking in ­circles to turn a grindstone in a mill. He multiplied the distance it walked by its ­roughly 180 pounds of pulling force, divided by the time it took, and came up with a new measure: ­horsepower. (His new engine did the work of 35 nags, about the same as ­today’s ­riding mower.) We still use his math to sell F-150s, but it can feel kind of ­abstract. So we came up with a few new ways to visualize one horsepower.

In the momentary dash of a flat-out sprint, the average cyclist can eke out a single horsepower. Pro pedalers can generate twice that. Horses, however, have humans beat on staying power; even Tour de France elites can’t sustain more than a few tenths of a horsepower over the full length of a race.

In electrical work, we measure power in watts, a unit named for dear James. A lone watt is tiny—only enough to power an LED night light. That’s why we almost always talk in terms of kilowatts, especially on electric bills. Still, 1 horsepower’s worth, or 746 watts, is enough to power a standard drip coffee maker.

Pull power and heat are two sides of the same coin (a coin made of energy). To convert, you’ll have to work with British thermal units. One Btu provides roughly a kitchen match’s worth of warmth (or, more specifically, one penny match’s worth). A single equine could pound out 2,545 Btu per hour, enough to boil 2.2 gallons of room-temp water (assuming a tight lid and no heat loss in a perfect, imaginary world), which would cook 14 servings of pasta.

work (n.) The amount of force exerted over a distance. Units include foot-pound, kilowatt-hour, and BTU.

en.er.gy (n.) The capacity to do work. has multiple forms, including mechanical, thermal, and electrical.

pow.er (n.) The rate of work, calculated as the amount of work done divided by the time it took to do it.

Note: this article has been updated to add statements and rearrange clauses so as to be more clear. Thank you to the Redditors who checked our work, though we stand by our inefficient method of cooking pasta.