How much data does streaming live TV use?

Let’s take a closer look at how much data some of today’s biggest streaming platforms actually use for live TV and your favorite shows. 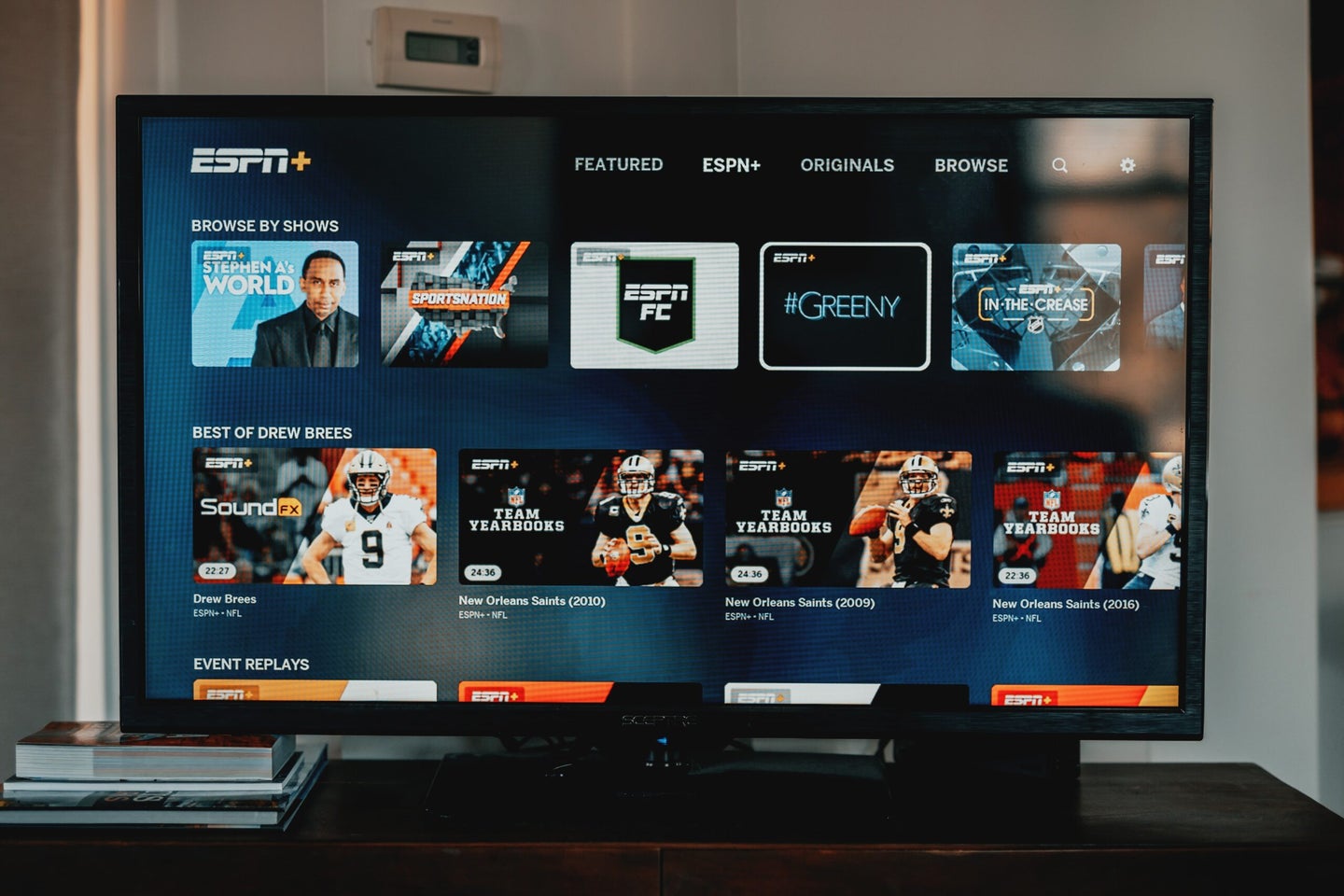 Streaming services are a common presence in households everywhere, whether you have cable or not, meaning data use is, too. What started with a few core platforms—Netflix, Hulu, Amazon Prime Video—has now exploded into a veritable pantheon of heavy hitters including Disney+ and HBO Max, as well as a wide array of more niche services like Crunchyroll (for anime) and Shudder (for honor, thriller, and supernatural content). While it’s great to have access to shows like The Mandalorian at the press of a button, the increased popularity of streaming means we’re using more broadband data than ever. Whether you’re watching a live event, like an NFL game or the Academy Awards, or streaming your favorite show, we are constantly downloading content as we watch it. With some companies setting data caps on home broadband, not to mention the limits most of us have on mobile, it’s more important than ever to keep an eye on how much data you’re using when you watch. To that end, we looked at all the most popular options on the market—both on-demand and live TV—to see how much data does streaming live tv use. Here’s what we found.

Before we dig into the hard numbers, we want to take a moment and explain some of the key terms you’ll need to understand to take advantage of this guide. If you spend a lot of time online, you’re probably familiar with things like internet speed, data, and resolution. But it’s always nice to refresh our memories, so we’re all on the same page.

Broadband providers refer to internet speeds by measuring the amount of data that can be uploaded and downloaded at a given time. Different types of internet connections exist, but the most common are cable and fiber. Cable is typically measured in Mbps (megabits per second), while Fiber is capable of unlocking speeds of up to 1 Gbps (gigabytes per second). Those who stream 4K content and connect multiple devices to the internet at once are better off with fiber—assuming it’s available in your area—since it offers more bandwidth.

Data refers to the information that’s transmitted to and from the internet. The transmission is achieved through uploads and downloads. Data is exchanged every time you stream a podcast or post a photo on your favorite social media platform.

Most home internet plans offer unlimited data, but some broadband providers have options with a data cap. Let’s say your data cap is set for 1TB per month. If you go over that cap, you might have to pay an additional fee for extra data, or your connection might get throttled.

Throttling is when a broadband provider slows down your internet speeds, and it might happen in a couple of different ways: if the provider feels there’s too much bandwidth congestion and it will help optimize things for everyone, or if you’ve hit a set data cap.

Generally, there are four different resolutions: 480p is standard definition; 720p is high definition (HD); 1080p is full high definition (Full HD); and 4K is ultra-high definition (UHD). And whether 4K vs. 1080p is right for you is a personal choice influenced by several factors. But one thing’s for certain: the higher the resolution, the more data you’ll consume. Just invested in a new Apple TV 4K and one of the best OLED TVs on the market? You’re more likely to churn through data faster, so the following metrics will be particularly useful.

Popular streaming services and how much data they use

There’s more streaming content to watch than ever, so it’s important to know how much data is used by today’s most popular streaming services. With this information in hand, you can stay under your monthly data cap and avoid getting throttled by your broadband provider.

Based on our research, most of the “major” on-demand streaming services use roughly the same amount of data per hour depending on the quality of the stream. Some of the platforms provide a breakdown of how much data they use per hour, while others simply recommend a minimum internet speed for a consistent, buffer-free experience.

Additionally, some services allow you to control the quality of your stream, effectively letting you control how much data you use. Even the ones that let you choose, though, will automatically set your stream quality based on the speed and bandwidth of your internet connection. Some services also offer data saver modes that stream at lower resolution, which is good if you have a data cap or are on a mobile device out of range of Wi-Fi.

We’ve gathered official figures from many of the most popular streaming services currently available to the public. Obviously, we do not feature every service on this list, but what we’ve seen seems to suggest a standardized range of data usage.

How much data do I need?

People aren’t just streaming at home; thanks to smartphone apps, it’s easy to watch TV and movies on the go. But be wary of how much streaming you do in line at the DMV, because it can consume your data plan in a hurry. All of the major carriers offer monthly “unlimited” data options and will throttle your connection depending on network congestion. A prepaid data plan will allow you to pay ahead for an allotment of data per month. Some options include 5 GB, 25 GB, and 100 GB plans, and while that’s plenty for browsing the web, listening to music, and uploading photos to social media, it’s a little light for heavy streaming of movies and TV.

For those of us who have home internet with a data cap, picking the right service will come down to your usage. If your biggest downloads are 4K streams, a base 1 TB per month data plan should be enough to get by, so long as your TV isn’t on 24/7. For playing video games, uploading and/or downloading video on your computer, or doing any number of other things that require transmitting a lot of data, you will likely need to assess your data usage to figure out how much you need. Also, keep in mind that data usage adds up much quicker when you have multiple people connecting to your network at once.

Does streaming use more data than downloading?

That said, most streaming services feature settings that automatically adjust your stream quality (and the amount you download) depending on your bandwidth. Streaming a movie in 4K may use less data than downloading it because the platform adjusts the download at various times over the course of the stream.

How to avoid going over your home internet’s data cap

Like it or not, the best way to avoid going over your home internet data cap is to limit your usage. That means less browsing, less online gaming, and, yes, less streaming—including YouTube videos and Twitch broadcasts. When you do stream, consider picking a lower quality setting if you’re watching an older show or something that isn’t visually arresting. Something like an episode of Seinfeld should be fine in HD, whereas an epic like Dune on HBO Max is worth using that extra bandwidth and data to stream in glorious 4K.

If your broadband provider offers an app, download it so you can monitor your usage throughout the month. Some Wi-Fi routers also allow you to control your data usage. For example, an Eero router has a companion app that will show you real-time usage for devices that are connected to your network and cut them off if needed. There’s also a feature that will let you set schedules and even pause Wi-Fi. These features will help curb your usage if you’re afraid of going over any limits set by your broadband provider.

If data caps are a concern, you should look out for services that allow you to pick the streaming quality and/or offer data saver modes. Netflix, for example, has a basic plan that only lets you stream in standard quality, which uses about 0.7 GB of data per hour.

Keeping an eye on how much data you stream

If you have a data cap at home or on your phone, it’s important to be conscious about how much of your data you’re using when you watch TV or movies. Generally, streaming and live TV services require a connection speed of approximately 10 Mbps and use up to 3 GB of data in an hour for a stream in Full HD. While it’s hard to keep a tight hold on how much data you use from moment to moment, that is a guide that can help you understand your internet usage.