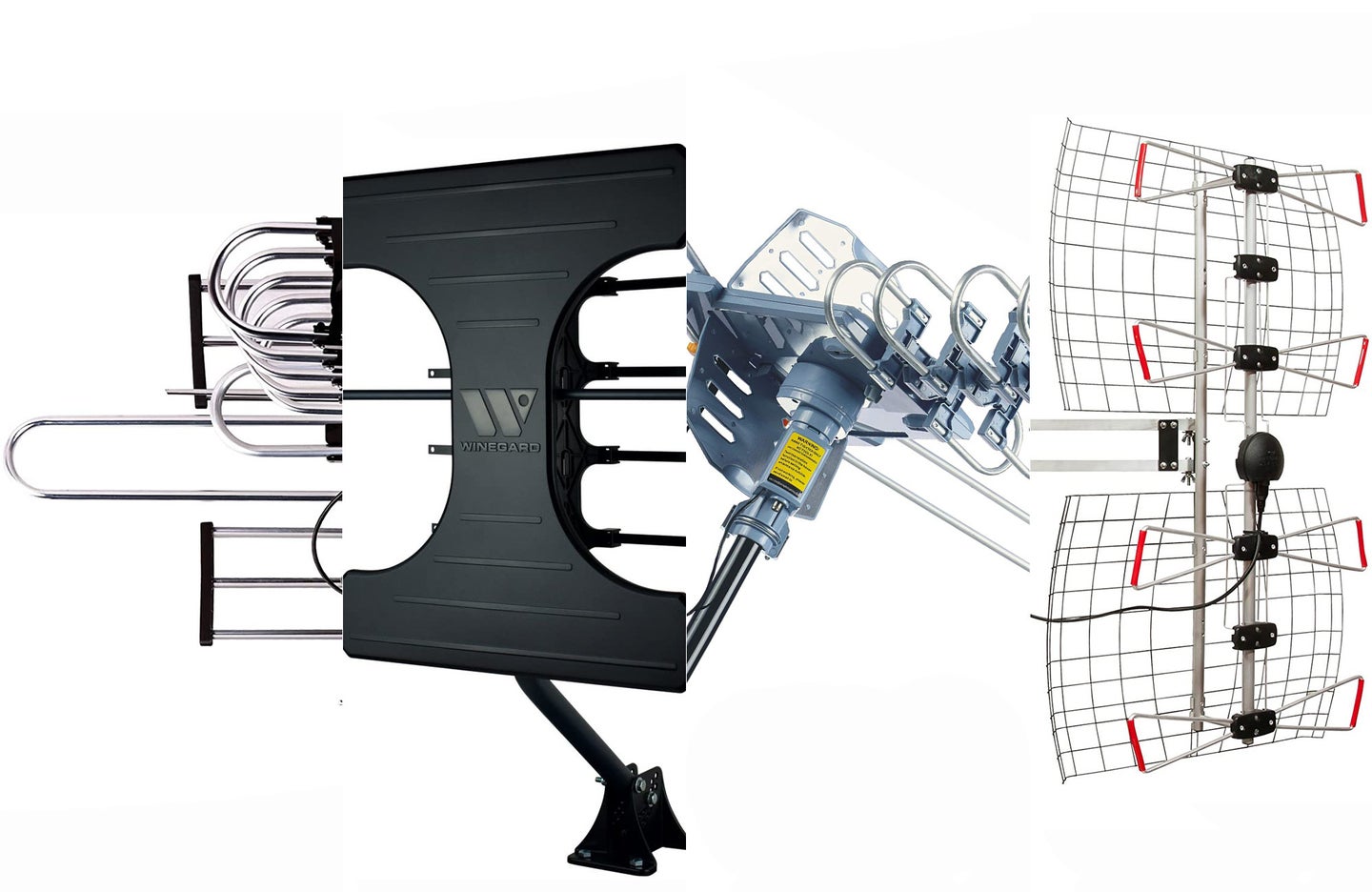 How to lose cable, but keep your local channels.

Mass cord-cutting—people moving away from cable and satellite to streaming services—is mostly a case of “out with the old, in with the new.” The switch has led to a surprising comeback for a certain older piece of gear: the humble TV antenna. Digital streaming platforms like Netflix and HBO Max may have all the hot shows you want, but not your local network affiliates for regional news and sports. Fortunately, these stations are still broadcast for free over the air if you have an antenna.

Compact, affordable indoor TV antennas have become a popular choice, allowing even apartment dwellers access to over-the-air (OTA) signals. However, traditional roof- or attic-mounted antennas still outperform their indoor counterparts, with the obvious physical advantage of being higher up and having less interference. If you own your home or otherwise have safe access to bolt down a larger, fixed antenna, you will absolutely get better performance and more bang for your buck, which could be essential if you’re in a rural area and need that extra juice to pull in distant signals clearly. Choosing the best outdoor TV antenna can seem like an overwhelming task meant for technicians, but we’ve done that research for you so you can just choose the antenna best suited for your needs … unless you want to make your own?

How we selected the best outdoor TV antennas

The best outdoor TV antenna gets you all the channels you want clearly. You don’t necessarily need anything fancy. We’ve combed through consumer and critic reviews to find consensus on the best performing antenna on the market today, depending on various specific needs such as range, cost, or size.

What to consider before buying the best outdoor TV antennas

Anyone looking to invest in an OTA TV antenna should start by learning a little bit about their local broadcast landscape. What stations are available at their address, along with info about broadcast frequency and, most importantly, the distance and relative strength. There are a variety of free tools online for getting all this information, including AntennaWeb, and the FTC’s own DTV Reception Maps.

Over 95% of Americans have access to local affiliates of FOX, CBS, ABC, NBC, The CW, and PBS. Most will also likely have some combination of other broadcast stations like Ion, Telemundo, and MeTV. As a general rule, the closer you are to a major city, the more stations you will have closeby. Make note of the stations that you want to watch, and then find an antenna that can accommodate the most distant signals that matter to you.

Since the U.S. mandated broadcasters transition from analog broadcasting to digital in 2009, the signal quality of OTA television has vastly improved. So much so that it is often less compressed (and so clearer and brighter) than the same channel being crunched down and sent over a landline as part of a cable package. Full HD (1080p) has become the current industry standard for most broadcasts, and all of the antennas we recommend can receive that signal. Some antennas also market the ability to process 4K broadcasts, but that isn’t something you really need right now. While 4K OTA broadcasting is possible, few networks do so. There’s little pressure to upgrade at the moment since the difference between SD and HD, which itself still feels fresh to many OTA watchers, is much more noticeable to the unaccustomed eye than the difference between HD and 4K.

There are a few specifications that you really want to keep in mind when picking your antenna. At the top of the list, check out its maximum range. Your reception and picture quality for OTA channels will drop off if a station is near the outer edge of what your antenna receives. If you have channels on the edge, you may find yourself wanting a separate amplifier to boost the signal, but a higher maximum range is always better.

Gain, expressed in decibels (dB), is a measure of how well a given antenna performs against a standard reference in picking up signals in a particular direction, ranging up into the 30+ dB on the very high end. More gain is better, as you might expect. Unfortunately, manufacturers don’t always list it. Other stats like impedance and voltage are often listed in ohms and hertz, respectively, but most TV viewers won’t find scrutinizing them to be extra effort, as they are quite technical.

The other major capacity listed that may confuse a first-time buyer is Ultra High Frequency (UHF) and Very High Frequency (VHF), which refers to the frequency bands at which particular signals are broadcast. Like air traffic control keeping planes from running into one another, these signals are managed by the FTC to ensure that different stations and other broadcast functions (such as cell or emergency) are all spread out at different points along the electromagnetic spectrum to avoid interfering with one another.

As the names suggest, UHF is the higher-frequency band, and most TV stations live there. VHF is still very much in play, however. This will be listed along with each station in the above-mentioned online tools (with VHF often being divided into Hi-V and Lo-V), so that will give you a sense of what you should care about. Contemporary antennas are typically either UHF only or combined, with outdoor antennas being able to actually have separate dedicated elements to capture both. Even without dedicated VHF support, however, UHF antennas often end up capturing Hi-V signals regardless.

If you are able to install an outdoor TV antenna on your roof, there’s really no reason not to these days. Why pay someone else for an inferior product when you can just get the better version directly for free? Here are the best outdoor TV antennas that we could find.

Why it made the cut: The Antennas Direct 8-Element Bowtie is a powerful all-purpose antenna that should suit most people with room for it.

Antennas Direct’s 8-Element Bowtie antenna is not subtle. The four large lattices, stacked two-tall, side by side, stick out. But that’s the secret to its power! Its eight sensing elements are spread out across two independently rotating columns, allowing you the flexibility to either spread them out for wider coverage or focus them for a better signal in a single direction. Its listed range of 70 miles, 17.4 dBi gain, and flexible configuration make it a great all-purpose option, although it will typically require some additional hardware to fully mount and connect.

Why it made the cut: Five Star’s outdoor antenna reaches extremely far for its accessible price.

The Five Star Outdoor Digital Amplified HDTV Antenna makes it very clear that it can take in signals from any direction with its six reflector elements spread over three poles pointing outward from a central, motorized shaft. It boasts an impressive 200-mile range with a built-in signal booster, making this a great option for rural areas. It also includes wiring and hardware for attaching up to five televisions and a mounting pole. Although it does require a bit more assembly than other options, that reflects a lot more capability for people willing to put in a bit of work.

Why it made the cut: Winegard’s Elite 7550 antenna performs extremely well, especially for its size.

Winegard has emerged as a big name in TV antennas for good reason, and the Elite 7550 is a great example of what you can get if you’re willing to spend more on a contemporary antenna. Although it doesn’t match the expansive range of some, it performs extremely well within its listed 70 miles, bringing in more and clearer channels than many other antennas. Much of its special sauce is the built-in mechanisms it has for reducing interference from competing signals, such as an LTE filter to cut out cell phone interference. This makes it great for cities or large towns where the problem is more likely to be an overabundance of signals in the air rather than reaching for distant, quiet ones. The only complaint we’ve seen consistently is that, despite promises that it is fully weatherized, many people have said the plastic construction and mounting hardware don’t feel as sturdy as they would like, which could be a concern if you live somewhere with more serious storms and winters.

Why it made the cut: PBD offers a more value-focused alternative to our long-range antenna that also covers every direction.

PBD’s Digital Outdoor TV Antenna looks like a laser turret meant to shoot down rebel X-wings from the top of a Star Destroyer with its directional array and 360-degree motorized rotation, if you’re into that sort of thing. It features a great long-range antenna and comes at a relatively low price for the power and flexibility it offers. In contrast to our other, more expensive motorized antenna, the PBD also features very easy snap-on assembly that minimizes the need for tools. The only complaints we have seen are that some people have found the remote control for rotation to be imprecise or buggy but, across the board, it is a very dependably well-liked product.

Why it made the cut: GE’s Outdoor TV Antenna is a well-built, no-frills solid workhorse that doesn’t cost all that much.

GE’s Outdoor TV Antenna 29884 is as no-frills as its generic name would suggest, but often that’s all you need. It’s got solid performance at a 70-mile range that it even functions well in an attic, which you may want to do since it’s not too aesthetically pleasing. It only receives signals from the direction it’s pointed, with no rotation or omnidirectionality, so it may not be the best fit if you can pull in distant signals from multiple cities. In many cases, however, it’s more than good enough, especially for how much less you’ll pay than for some of the more expensive options on this list.

Typically bigger does mean better for outdoor TV antennas. Although there are always technological advances allowing engineers to squeeze more capability into a smaller form factor, the basic physical reality of antennas is that more receptors spread out over a larger area will pick up more signals, just like being higher up will always help.

Q: What is the difference between an antenna booster and amplifier?

There is no real difference—the industry uses these terms interchangeably to describe devices that boost or amplify the signal once you have captured it from the antenna, improving its quality.

Yes! Any physical object, including a large tree, can interfere with your broadcast signal if they stand directly between the antenna and its source. Wet leaves can be particularly disruptive, as the water makes them even more prone to reflect signals and create noise. This is frequently less of an issue than indoor alternatives since they are often placed high up on the roof, but you may want to consider trimming some branches if you’re having trouble receiving a nearby signal.

There’s no better time than now to drop your cable or satellite TV subscription, and an HDTV outdoor antenna may be just what you need to finally pull the trigger. The exact type and model you need will depend on a number of factors, but you can rest assured that there is almost certainly a great option out there for you at a very reasonable price.