Screens of the future could be made with transparent silver 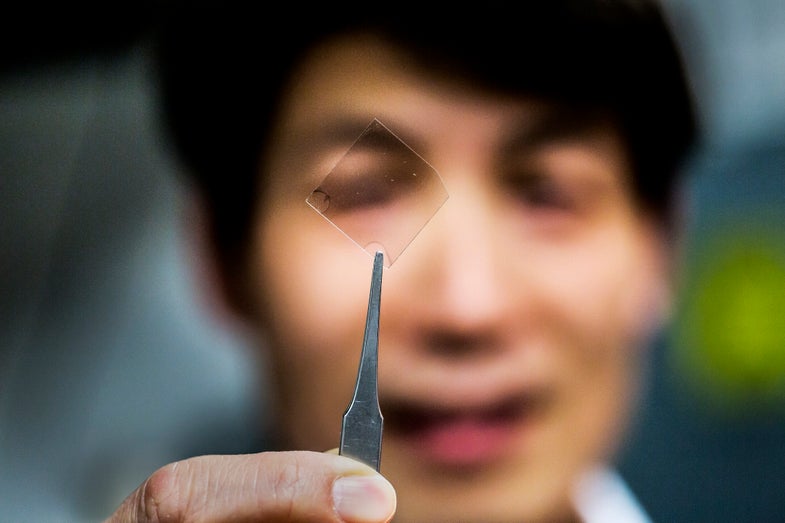 There’s a good chance you’re looking at—or through—some indium tin oxide (ITO) right now. This ceramic material conducts electricity, but is transparent, which makes it crucial for the production of screens of all kinds, like those on smartphones and LCD televisions. But indium isn’t pulled out of the ground directly—it’s a byproduct of refining other metals—and the U.S. needs to import it from places like Canada and China. As a result, researchers have been looking for a viable ITO replacement for more than a decade, and it may come in the form of a super-thin layer of silver.

It’s not that indium is insanely expensive—it cost about $109 per pound on average last year, on the free market—nor is it incredibly rare.

But “its supply is fixed,” Ioannis Kymissis, an associate professor of electrical engineering at Columbia University, says, “because there’s no real primary source.”

A primary reason to search for an alternative is to “reduce the use of relatively scarce materials,” Kymissis says, with an eye towards sustainability. Another is that ITO isn’t good for flexible, bendable displays, because it’s brittle.

Jay Guo, a professor of electrical engineering and computer science at the University of Michigan, just published new research in the journal Advanced Materials that suggests using a seven-nanometer-thick film made of silver could work. Silver is very electrically conductive, and is also surprisingly transparent in such a thin layer.

But if you try to spread silver out thinly on its own, it doesn’t behave nicely: it clumps into what Guo compares to islands. He solved that problem by mixing it with either copper or aluminum.

“And then this magic happens,” Guo says. “Now you look at the film, it’s very smooth.”

Guo says his creation could also help make displays that are bendable: silver is quite ductile, and it can be deposited onto flexible plastic devices without the need to heat it up during the manufacturing process, Guo says.

“Especially in the future, where more and more flexible devices are demanded,” he says, “I think that this could have a very good use.”

Kymissis, who wasn’t involved in the new study, says that silver is a great material for flexible displays. But he cautions that ITO won’t be going anywhere anytime soon.

“Everybody that has tried alternatives,” Kymissis says, “has either given up or gone bankrupt.” So, while the search goes on for a replacement, you can count on ITO in your screens for the foreseeable future.