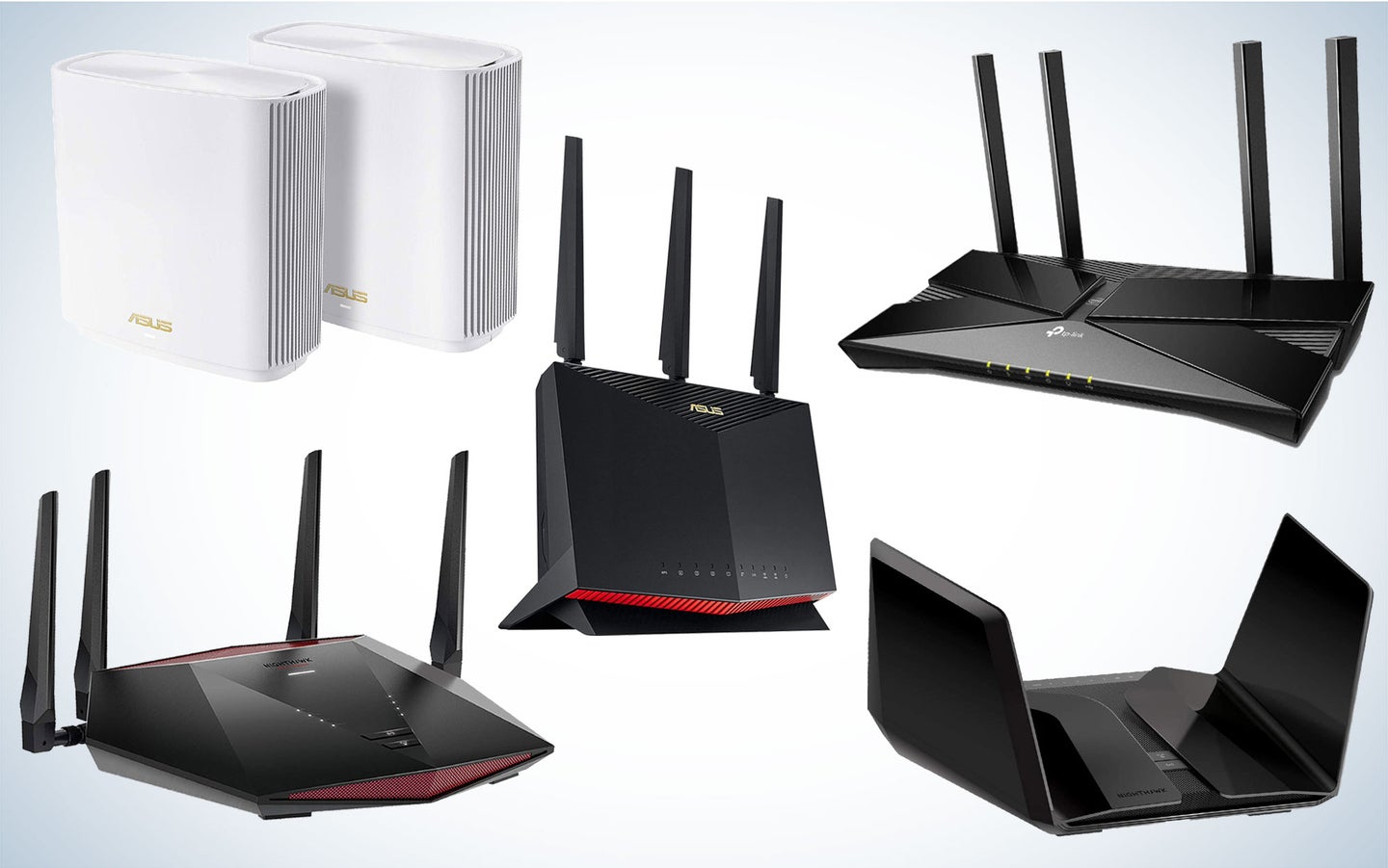 Everything you need to know about future-proofing your network with a WiFi 6 router.

If your home network is starting to creak and groan under the weight of all your phones, computers, appliances and their ever-growing demands for data, it may be time to upgrade your wireless router. WiFi technology keeps improving to keep up with the growing demand in increasingly smart homes, and the latest iteration, WiFi 6, was designed to help bear the burden of many, many connected devices. Whether you’re a casual user in a small apartment, a pro streamer in a family full of early adopters, or anything in between, the best WiFi 6 routers can offer an easy path to better WiFi at home. This introductory rundown of WiFi 6 will help you make an informed decision, and our picks will show the best they have to offer.

How we selected the best WiFi 6 routers

Now that WiFi 6-compatible devices have been on the market for over a year, there are enough routers available to actually identify the cream of the crop, rather than just highlighting what’s out there. We selected these specific routers based on testing, reading professional reviews, and consumer recommendations to ensure that these picks are both well featured on paper and well-liked in practice.

The two main things to think about when picking a new WiFi 6 router are how and where you are going to be using it. Broadly, as you would expect, the greater your anticipated usage, the faster and more powerful your router should be. Like computers, routers have processors and memory, and having one that’s more powerful will enable your home network to handle a lot of throughputs.

As a rule of thumb, if you care enough to get a WiFi 6 router, you’re going to want a multi-core processor and at least 256 MB of RAM or more. The router’s internal hardware, particularly its memory, affects how much data it can process without slowing or stuttering. A weak router can be a bottleneck for your network, especially if you pay for high-speed internet and have many connected devices communicating at once.

You also need to consider where you plan to put your router. Its location matters for both the distance the router needs to cover to connect your whole home, and the density of stuff in that space, interfering with the signal. A less expensive router will handily cover a studio or one-bedroom apartment, but you may need to invest in something more powerful to cover a larger, multi-level space like a house. If a single router still won’t reach far enough, or there are dead spots on account of interference, then there are WiFi extenders that can rebroadcast and extend the signals from existing routers, or dedicated mesh WiFi networks, which cover larger areas with multiple broadcast hubs.

You may be wondering where WiFi 1-5 were, and your confusion isn’t unwarranted. The WiFi Alliance, an independent company that maintains wireless networking standards, retroactively added a consumer-facing number system to match the legacy IEEE wireless standard names like 802.11ac and 802.11n. So 802.11ax, the newest standard launched in 2019, is now WiFi 6. (It’s also called “High-Efficiency Wireless” sometimes).

We’ve put together a detailed description of everything new and exciting about WiFi 6, but here’s the short version: WiFi 6 was made in anticipation of a wireless future, with a population boom of connected devices and neighboring networks to sort through. It’s faster, and has been designed specifically to perform well in crowded networks. As with all prior standards, it’s fully backward compatible with all earlier hardware, so while only newer devices can take full advantage of its potential, it will connect to anything.

Router speed and your ISP

The primary stat you will typically see with a router looks something like “AX5700.” The letters refer to standard–“AX” is shorthand for “802.11ax,” A.K.A. WiFi 6–and the number refers to the combined maximum theoretical speed across all bands (in Mbps). The actual speeds you get for any one device in practice, however, will likely be lower, and depend on various factors like hardware, interference, and placement.

You should also keep your ISP plan’s maximum data rate in mind. Make sure that your router can handle as much bandwidth as your data cap or more to ensure you’re not losing out, but also don’t go overboard and spend a lot on a multi-Gigabit-capable router when your maximum download speed isn’t breaking 25 Mbps in the foreseeable future.

For security, you’re primarily looking at “W” acronyms. WEP (Wired Equivalent Privacy) is the original protocol for secure WiFi transmissions, but is generally considered to be insecure and out of date. For contemporary routers, you want to make sure that they are compatible with WPA (WiFi Protected Access). WPA2 is the current standard, but many WiFi 6 routers are ahead of the curve, and support  the new and even more secure WPA3 standard.

Some routers also support WiFi Protected Setup (WPS), a common extension of WPA that allows for a simple, push-button connection between devices, although security experts now recommend that people not use it due to some fundamental vulnerabilities. Many routers also offer more specific security features, such as malware protection and parental controls, which are all worth considering if they seem relevant.

The best WiFi 6 routers: Here’s what we recommend

The best WiFi 6 routers are, by and large, a huge leap forward over your average, ISP-provided networking hub. They offer more speed, more security, and the capacity to get the most out of your internet service. Each of these picks is suited to a different use-case, price point, or other needs, but they can all make a big difference in the right setup.

Why it made the cut: The RT-AX86U bundles all the best features that WiFi 6 has to offer in a user-friendly package that isn’t cheap, but offers great value for the category.

The stealth bomber aesthetic on this overall best WiFi 6 router probably gives away that the Asus RT-AX86U is ostensibly a gaming router. As leading bandwidth hogs, though, gaming is where you should look if you’re trying to future-proof your network. It performs well across the board, especially for its mid-range price. Its setup is easy through either a web browser or app, and it offers a lot of control and advanced features for you to tinker with, including a VPN, anti-malware software, and parental controls. The only drawback is that it’s somewhat large and can only stand vertically, without the flexibility to lay it flat or easily wall-mount it.

Why it made the cut: For its low cost, the TP-Link Archer AX50 is a high-performing router that brings the main benefits of WiFi 6 and a robust general feature set.

TP-Link Archer routers have long been some of the best value WiFi 6 routers, and the AX50 is no different. It offers fast WiFi 6 performance, although with notably more drop-off with distance and interference than the more expensive counterparts, so it shines best without help in small spaces. The AX50 comes with TP-Link’s useful and user-friendly QoS (Quality of Service) software, along with parental controls and antivirus. It also features generous physical connectivity options for a budget router, with four gigabit LAN ports and support for link aggregation, which combines multiple ethernet sources into a single, stronger connection. The one notable sacrifice it makes from WiFi 6’s suite of upgrades is that it is not compatible with WPA3 security, instead still relying on WPA2.

Why it made the cut: Netgear’s Nighthawk XR1000 is a high-end WiFi 6 router built for competitive gamers who want low ping and a high KDA.

The Netgear Nighthawk XR1000 is the best WiFi 6 router for gaming. It’s also expensive, particularly for being dual-band and not having multi-gig wired connections. (It doesn’t help that Netgear charges a subscription for security updates that some other manufacturers provide for free). Multi-gig connections and a third transmission band are future-proofing features for now, however, and the XR1000 goes the extra mile with gaming-oriented features that will improve performance today. The polished and helpful DumaOS provides all the functionality you’d expect from a premium router’s UI, but with extra functionality designed for gamers, like Geo-Filter and Ping Heatmap, which intelligently test and record data on the ping of the various server options for online games to ensure that you always have the best connection possible.

Why it made the cut: WiFi 6E is the bleeding edge of consumer wireless tech, and the Netgear Nighthawk RAXE500 is the best option available now.

WiFi 6 is still broadly in the “early adopter” phase, but WiFi 6E is newer and more exclusive. WiFi “6E” routers have the same functionality as WiFi 6 routers, with one extra trick: They can also connect to devices via the 6 GHz frequency band, which was recently opened up for general use by the FCC, in addition to the now-standard 2.4 and 5 GHz bands. Like the jump from 2.4 to 5, 6 GHz signals allow for even faster data transfer, but are more sensitive even more to physical interference. Generally speaking, that means you need to keep your router close to any devices that you plan to connect using 6GHz.

The Netgear Nighthawk RAXE500 is a well-made and high-performing 6E router, though very expensive for a standard that is not yet in wide use. It stands out as the best WiFi 6E router among its peers for its striking design, excellent performance, and premium features, as you’d expect from such an expensive product. That said, 6E is still extremely new, so the standards for performance are still being set.

Why it made the cut: The Asus ZenWiFi AX XT8 is the best compromise of efficacy and cost for WiFi 6 mesh routers.

All of the best WifI 6 mesh routers allow for better coverage over large spaces by having multiple broadcast points. The Asus ZenWiFi AX XT8 comes with two identical hubs, either of which can serve as the primary node, helping to make setup easy. It features three bands (one 2.4GHz, and two 5 GHz), with the second 5GHz band by default set for “backhaul” communications between the primary and the secondary node, but you can configure it to be dedicated otherwise. It performs comparably to more expensive mesh systems, and includes great security tools with lifetime updates.

Q: What is the advantage of WiFi 6?

WiFi 6 bundles a variety of improvements across the board to your WiFi experience, like faster speeds overall and better performance at the edge of your network’s range. The majority of the changes are focused around better supporting the growing number of connected devices competing for attention.

In short, yes. Where WiFi 5 only operated on the 5 GHz band, WiFi 6 brings back the 2.4 GHz band. On account of physics, lower-frequency waves are better at passing through physical interference, so 2.4 is slower than 5, but better at penetrating walls. The 6 GHz signal enabled in WiFi 6E offers an even faster connection, but is even more sensitive to walls.

Q: Does the PlayStation 5 support WiFi 6?

The Playstation 5 does indeed support WiFi 6, but cannot take advantage of the 6GHz signal from WiFi 6E routers.

The final word on the best WiFi 6 routers

WiFi 6 is here to stay, and it’s worth investing now if you’re looking to upgrade your home network. It isn’t an absolute necessity yet, but it may help more than you think. If you take an inventory of your connected devices and find you have a house full of signals bouncing around, it may make sense to upgrade. After a year of router launches, there are now enough options that you can probably find one that suits your needs.