This Decorative ‘Smart Pin’ Is The Wearable We Need Now 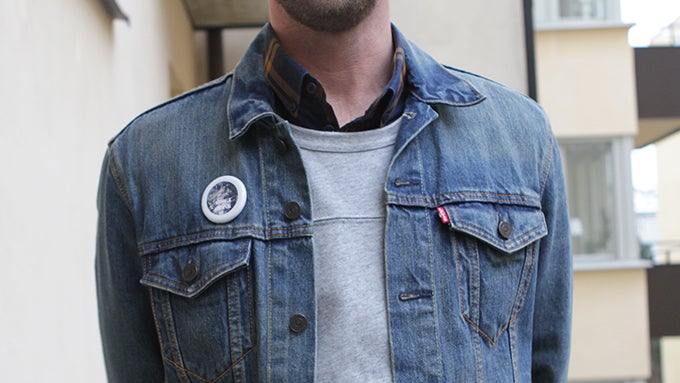 “Wearables” were supposed to be the next big thing in consumer technology. In practice, it hasn’t turned out that way — fitness trackers are still fairly niche, and not even Apple has managed to convince the masses to adopt smartwatches to go with their smartphones. But if there’s one wearable that I could see catching on in a big way it’s this digital pin from Pins Collective, a startup out of Stockholm, Sweden.

Currently just a Kickstarter project, the idea is pretty great: take the classic idea of a simple decorative pin (a.k.a. “button” — like the old plastic and metal kind with some pop punk band name and logo you may have worn on your jean jacket back in high school when you were trying to look cool, but in hindsight, seems embarrassing and regrettable) and make the face into a thin LCD screen. Then, sync it wirelessly to an app on your smartphone that lets you change the image displayed on the screen to pretty much any photo or moving image that you want. The face can even display GIFs, use for the increasing numbers of us who communicate primarily or solely in that medium.

There remain a number of thorny technological issues with the idea, namely the fact that it will not be fully waterproof, that it will have a 74-hour battery life for still images and only 2.5 hours for moving ones, that it must be charged via Micro USB, and will cost a projected $99 U.S. when sold commercially (Kickstarter backers can get them for $49). There’s also the issue of it being in questionable taste. But none of that would stop me from wearing one (at least until augmented reality and nanorobotic suits replace the need for clothes).

Pins Collective is asking for a total $75,000 from backers in the next month to make the dream of digital pins into reality. That’s actually a pretty modest amount compared to some other Kickstarters. And whether you like the design or not, is it really any worse than other wearables?