Oura Is A Round-The-Clock Wellness Tracker For Your Finger

Can wearing this ring help you sleep better and feel better? 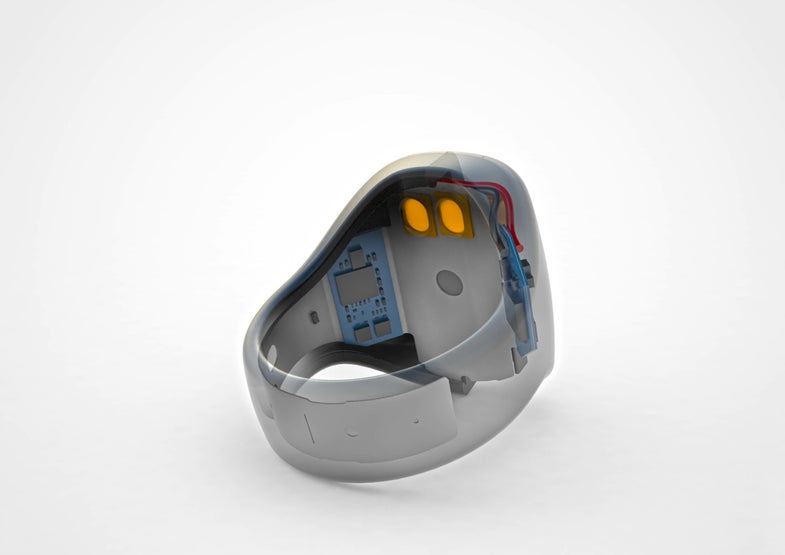 In the last couple of years, wearable health monitors have gotten smaller, more accurate, and cooler-looking. But for many people wearing one or more of the 19.4 million wearable fitness devices in use today—a figure that’s expected to triple by 2018—they are still too clumsy for round-the-clock wear, especially during sleep.

Now, meet the Ōura ring, which Petteri Lahtela, co-founder and CEO of the company, describes as “unobtrusive enough to wear 24/7.”

The ring includes several trackers inside its tiny form: a sleep monitor, a step counter, a heart rate monitor, and a pulse oximeter. (It’s the only wearable on the market to include all four.) When worn continuously, the ring monitors how well you’re sleeping during the four phases of sleep, and how active you are during the day.

“It’s a basically a computer on your finger that interprets sleep and other rhythms of your body through built-in nanosensors,” says Lahtela.

Lahtela says Ōura’s design was inspired by his own struggle to balance the grind of his work schedule with the demands of family life and his own health. Getting quality sleep and enough of it was a “constant challenge.”

He’s not the only one. According to the American Sleep Foundation, 45 percent of Americans say that poor or insufficient sleep affected their daily activities at least once in the past week. Sixty-seven percent of those also report “poor” or “only fair” health.

The Ōura ring provides descriptive data on the measures it collects–the number of steps taken, the number of hours slept–and also generates predictive data on how to improve sleep and performance.

“Some days 10,000 steps are too much, other days you can do more even more. The better it gets to know your patterns and influences, the better it is at making recommendations,” Lahtela says.

Data generated through the Ōura ring can be merged with other health data. One of the first partners is We Are Curious, a data analytics company founded by 23andMe co-founder Linda Avey. We Are Curious allows users to chart and probe multiple health data streams—be they genomic data, metabolomic data, electronic health records, or data from the Ōura ring and other wearables.

Avey said most early users in the testing phase were by far most interested in sleep, making Ōura a natural partner. “There are a number of things that people seem to be interested in looking at to see if they can improve better sleep behavior. Caffeine consumption is a huge one, of course, as well as the CO2 environment in the bedroom at night,” she said.

The Ōura ring is on Kickstarter starting today, in U.S. sizes 6 to 13.