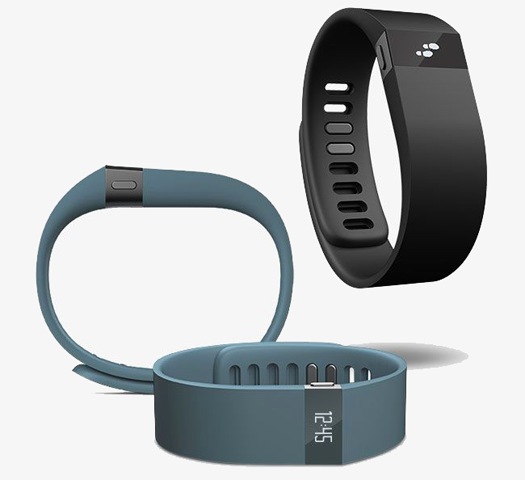 Today Fitbit, makers of some of the most popular fitness trackers on the market, introduced its newest and most expensive model ever: the $130 Fitbit Force. The biggest change? An OLED display that allows the Force to double as a watch.

The Fitbit Force is sort of a combination of a few of its other products. The tiny pocketable Fitbits, like the Fitbit One, have little bitty OLED screens that display calories burned, steps taken, that kind of thing. The Fitbit Flex is a bracelet-style tracker with all the same sensors as the Fitbit One, but without the screen. The Force is essentially a bumped-up Flex with the screen from the One.

Like the other Fitbits, the Force is simple and streamlined. It has a pedometer and, newly added to the Force, an altimeter, so it can measure steps taken on both flat land and stairs. It syncs with an app for your phone via Bluetooth (and also has NFC, so if you have a compatible phone, like a Samsung Galaxy S4, you can tap your phone on the Force to sync it) to upload all your data.

The display is small and glows a bright blue, and doesn’t come on automatically–you have to press a button on the side of the device to wake it up. (Other techno-watches, like the Basis Band and Pebble, use an accelerometer to turn on when you suddenly tilt your wrist towards your line of sight.) Fitbit says it’ll enjoy seven to 10 days of battery life, which is impressive, though if you regularly sync via Bluetooth, that’ll drain the battery faster.

We’ve expressed doubt in the efficacy of fitness trackers before, and the Fitbit isn’t too different from the models that provoked that doubt. It still doesn’t have a heart rate monitor, nor does it provide real-time notifications or alerts (though it does have a sleep alarm that vibrates gently). But it’s certainly the most capable product in Fitbit’s current lineup. You can learn more about it here.