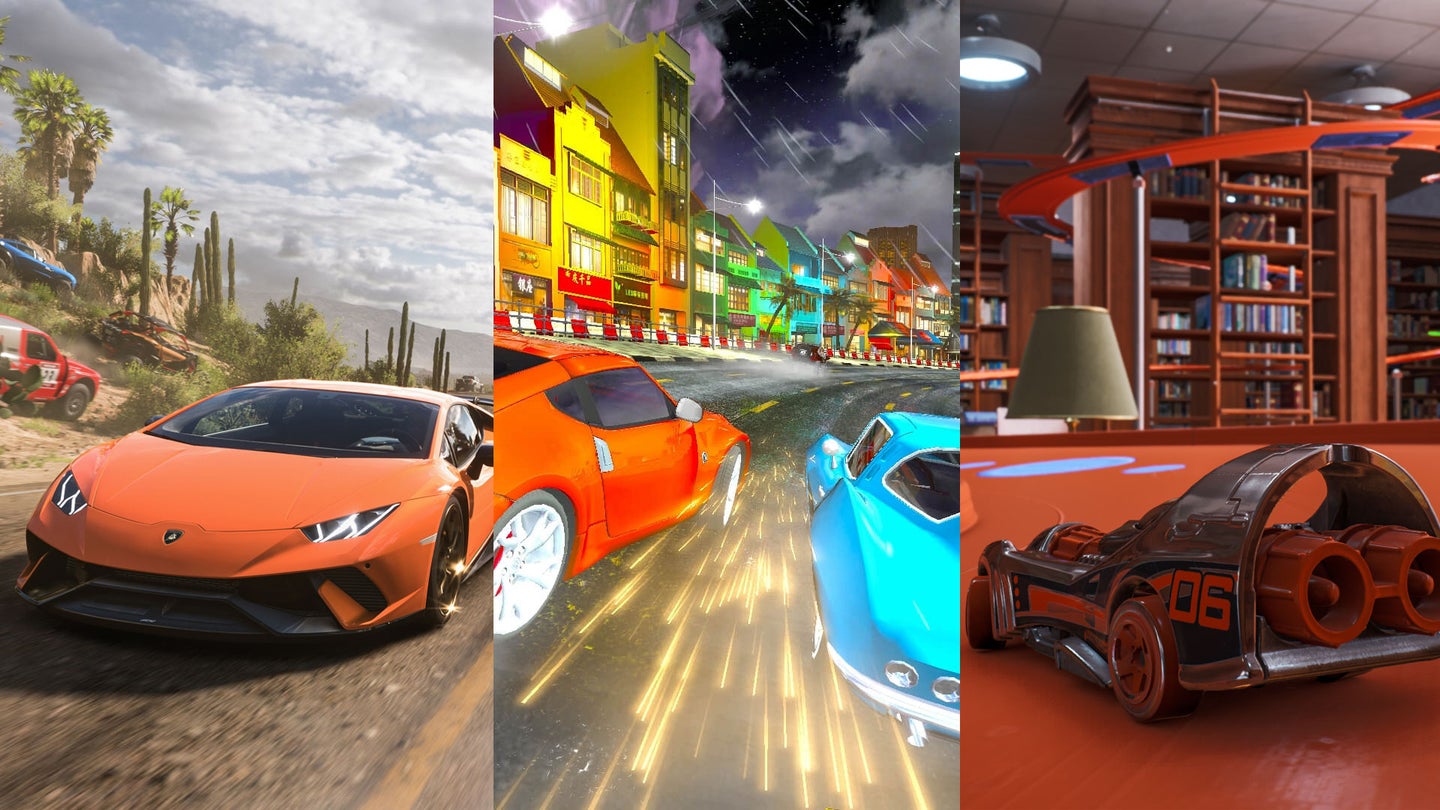 Please don’t play video games while driving. I realize it’s tempting, especially if you own a Tesla and have access to games through your in-dash console, even when it’s in drive. This is a classic “don’t do it just because you can” moment: On average, more than 3,000 people die per year in crashes caused by a distracted driver, according to statistics from the National Highway Traffic Safety Administration. (Some activists suggest that number may actually be much higher). You really don’t want to learn this lesson the hard way.

It isn’t that I don’t think that playing games and driving aren’t compatible. Racing has been a core inspiration for video games for as long as they’ve been around. The sense of speed, precision controls, the thrill of the chase – these are compelling sensations derived from a marriage of car and computer, which you should indulge in should the mood strike you… At home. Sitting on your couch or at your computer. Here are a few interesting driving games that are worth 100 percent of your attention.

And if you’re stuck in traffic right now… Keep your eyes on the road! This is what podcasts are for!

Microsoft’s Forza Horizon franchise is the current gold standard for racing games, and the newest entry in the series, Forza Horizon 5, is definitely the best racing game of 2021. The open-world racer splits the difference between a hardcore racing simulator and arcade racing free-for-all. It offers traditional road races, speed records to break, hidden cars to find, and a ridiculous race against a giant cargo plane.  Drive shiny, meticulous reproductions of some of the coolest cars on the planet across lush jungles, golden deserts, and beautiful cities across Mexico. (No Teslas, though. Sorry).

Rocket League is one of the wildest car-based games ever to hit the screen. You’re playing pick-up soccer, two-on-two or three-on-three, but everyone’s in a car. The vehicles have boosters that let you jump high in the air and flip your car to smack the giant ball into your opponent’s goal. Like actual soccer, success requires good communication with your teammates, great strategy to move the ball without your opponents interfering, and coordination to hit the ball just right. It takes practice to master, but it’s a crazy, fun time, regardless of your skill level.

All the real ‘90s kids remember Crus’n USA, the seemingly omnipresent arcade racing game at movie theaters, pizza places, and any place where kids might loiter. Despite successfully jumping to home consoles and inspiring a few sequels, the game never really eclipsed its initial run. If you have fond memories of hopping in that plastic driver’s seat and spinning that arcade steering wheel, developer Raw Thrills made a new Crus’n game in 2021, Crus’n Blast, which doubles and triples down on the original game’s wild approach to driving, adding tracks with dinosaurs, power-ups, and other elements that evokes the zany, over-the-top thrills of playing the original in an arcade.

Broadly speaking, you can separate driving games into two categories: Games where you want to drive your car well, and games where you want to crash it. Though the heyday of crash-happy games like Burnout Paradise has mostly come and gone, Wreckfest’s demolition derby driving gives you the chance to satisfy your craving for smashing and bashing other cars with your own, and watch with awe when your ride (safely) crumples into a hunk of junk.

If you ever played with Hot Wheels as a kid, you had the fantasy of getting behind the wheel and driving one of those bright orange plastic racetracks, with all of its fantastical dips, hairpin curves, and loops. Hot Wheels Unleashed lets you bring those childhood dreams to life, putting you in the cockpit of a toy car to race on tracks erected in and around giant “real life” rooms. There’s also a track-builder, so you can make your own courses, then “shrink down” and drive them. Even if you don’t have a connection to Hot Wheels, it’s a tight arcade racer with a unique personality that’s worth a test drive.