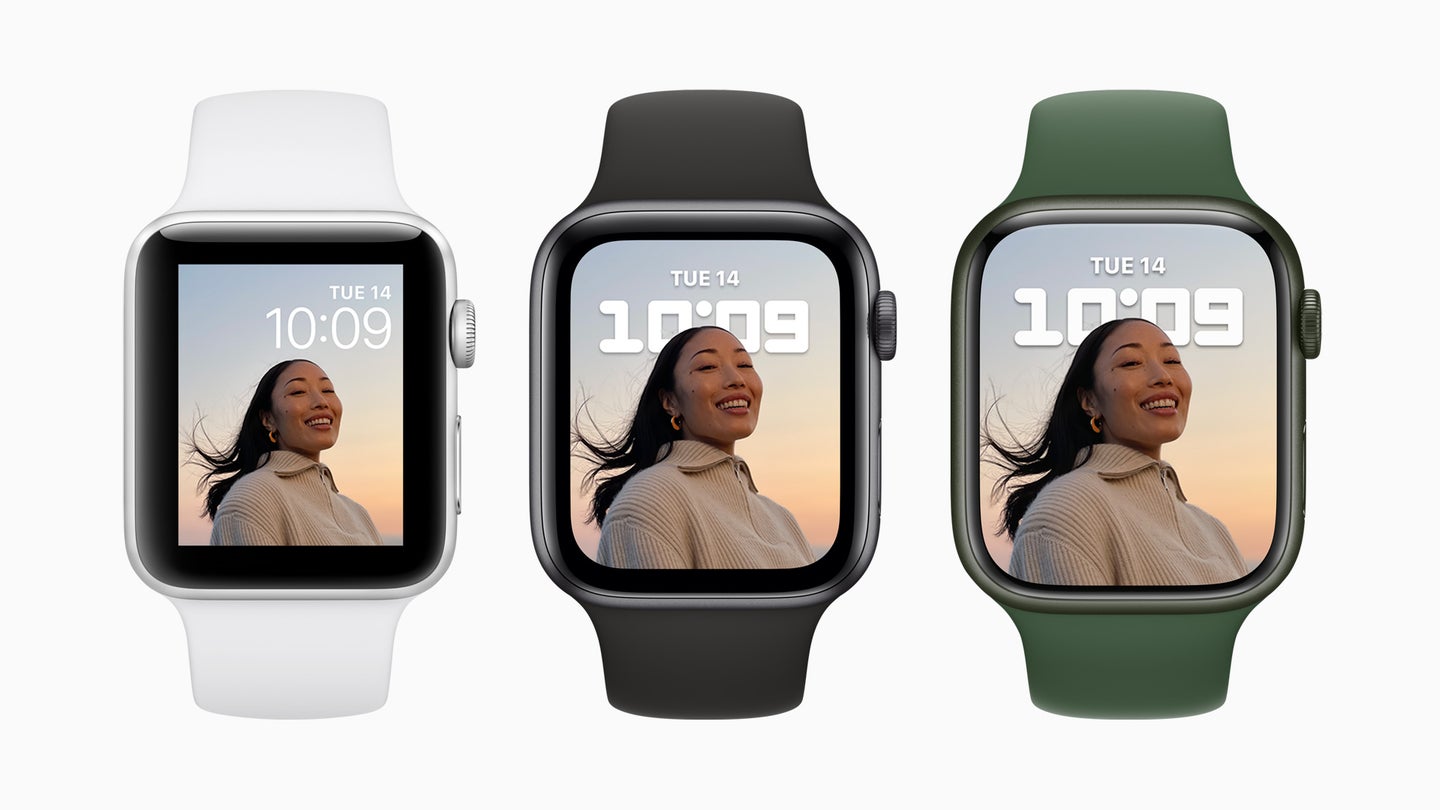 The Apple Watch Series 7 has a larger display. Apple
SHARE

It’s all about the screen

The screen is also reportedly brighter in power-saving “wrist down” mode, up to 70-percent in indoor areas versus the Apple Watch Series 6, so it should be easy to see the time at a glance without bringing the watch to your wrist.

It’s a comparatively small upgrade, but while we’re talking about things that pair well with a larger screen, it’s worth noting that WatchOS 8 will add QWERTY keyboard support for the Apple Watch. The larger screen should theoretically make tapping out messages a little easier, but it also supports QuickPath swipe typing.

The Apple Watch Series 7 body comes in eight colors: The original silver, graphite, and gold return, along with five new options—midnight, starlight, green, blue, and (PRODUCT)RED. It uses the same band connectors as past models, so upgrading Apple Watch wearers will be able to swap in and continue using their old bands. On the band front, Apple announced a new wave of third-party bands is on the way to bolster the current lineup, including new options from Nike and Hermès.

Apple announced that WatchOS 8 will roll out to all Apple Watches September 20. With the new operating system, Apple Watches will get new apps, enhanced support for biking, and other tweaks. One new app, Focus, allows you to limit notifications from all apps except the ones related to whatever you’re doing. You can choose different sets of notifications to let through based on specific activities like driving or exercising. The other, Mindfulness, builds out the “breathe” function on the Apple Watch into its own app, complete with visualizations and heart-rate tracking specifically for breathing sessions.

On the fitness front, WatchOS 8 features enhanced support for biking. The watch will now be able to detect when you start riding a bike and prompt you to start a cycling workout. Biking workouts now also support auto-pause/resume, as well as fall detection. With an increased affinity for tracking users on a bike, Apple claims that mid-ride GPS and heart rate detection will improve. The fitness app will also add workouts for Tai Chi and Pilates.

Many of the other core apps have also been updated. Wallet, for example, will add support for verified digital IDs and digital keys for your home and/or car. Home will allow you to check a HomeKit-enabled doorbell camera from your watch. The Sleep app can track your sleeping respiratory rate. Photos has a new design, as well. Crucially, WatchOS 8 adds the ability to run multiple timers simultaneously without an extra app.

Q: When will the Apple Watch Series 7 be available?

Apple hasn’t announced a specific launch date for the Apple Watch Series 7 yet. As of the end of the event, Apple said it would be in stores “later this fall.”

Q: Should I upgrade to the Apple Watch Series 7

We’ll have a better sense of how the Apple Watch Series 7 compares to its predecessors when we take a look at it in the coming weeks. For now, the only people who should upgrade on spec are first- and second-generation Apple Watch owners, as they won’t be able to update to WatchOS 8.

We’ll have more information on all of the Apple gear announced at “California Streaming”—including the iPhone 13, iPad 9, and iPad Mini 6—very soon. We also hope to have full reviews breaking down the good, bad, and the Apple about all of these devices in the coming weeks, so stay tuned.