Three times a year, the Department of Defense (DoD) solicits help from the small business community to transform their high-tech... 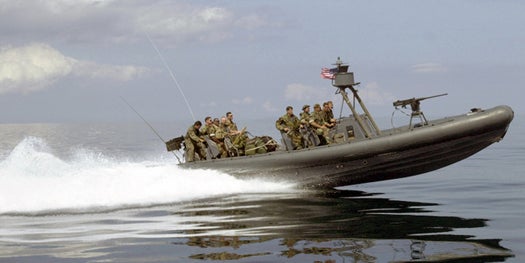 Three times a year, the Department of Defense (DoD) solicits help from the small business community to transform their high-tech research projects into actual, usable products. While the businesses use this opportunity to fight for some of that sweet, sweet government pork, for us, it’s a chance to get a look at the next generation of advanced military gear. With the new solicitations out today, we’re counting down the most intriguing projects that the DoD wants to get out of the lab and onto the battlefield.

SOCOM, the umbrella command for the Green Berets, Navy SEALs, and other commando units, is looking for a robotic control for their small, but very fast, rubber boats. Apparently, the light boats get tossed around too much while inserting commandos onto the beach. In fact, according to the solicitation, “Special Warfare Combatant Craft Crewmen attributed 95 percent of their injuries to special boat operations; 33.6 percent of injuries were to the lower back.” And here I was thinking the injuries would come from all the getting shot at.

The robot would automatically correct for the tossing and turning of the sea, providing a smoother, less exhausting and less dangerous ride for both the commandos and the boat pilot. Additionally, a robot-controlled boat may even allow for deployment in seas previously considered too choppy.

Commercial Application: Any boat that faces high seas would be glad to have this computer on board. And for those Deadliest Catch crab fishermen, this might just take some of the challenge out of grabbing pots with that grappling hook.

While many future UAV designs emphasis stealth features, some have noticed that our current enemies don’t have radar, but do have ears. Stealth doesn’t mean a lick if the Taliban can hear the lawnmower buzz of a UAV from miles away.

To solve this problem, the Navy wants to reduce the volume of UAVs without impacting performance. In particular, the Navy wants a focus on smaller UAVs like the Shadow, whose high-pitched whine both annoys and alerts.

Apparently, a UAV simply firing a missile isn’t enough. Since drones like the Reaper need fuel for the return trip and space for the sensor array, they can only carry relatively small missiles and bombs. So when the Army needs a whole lotta kickass, they still rely on regular planes or cruise missiles.

A UAV that is itself a missile changes that. Israel already deploys a UAV/missile combo called the Harpy, and it looks like the US Army wants one now, too. Essentially a cruise missile that loiters, the UAV would hover above the battlefield, recording the scene below. When the drone acquires its target, the UAV would swoop in and blow it up before the target has a chance to escape. And by carrying a bigger payload, it would ensure the job gets done right.

Commercial Application: Something tells me this one won’t end up on the shelf at Walmart.

Nerve agents like sarin gas attack the central nervous system. To do so, they pass through the small capillaries the feed the brain oxygen and nutrients. Unfortunately, the antidote for sarin gas can’t fit through the same blood/brain barrier. That means unless you get the antidote immediately after exposure to nerve gas, you might find yourself in a spot of trouble.

CBD hopes to find a way around that problem. By developing a anti-nerve agent antidote small enough to pass from the blood stream to the brain, CBD could drastically extend the window where that antidote would be effective. Additionally, by rooting out the nerve gas deep within the crevasses of the brain, this smaller antidote would also help prevent the long term nerve and brain damage associated with exposure to weapons like sarin gas.

Commercial Application: After the 1995 sarin gas attack on the Tokyo subway, first responders found themselves facing chemical attacks previously only seen on the battlefield. Additionally, pesticides similar to sarin gas are routinely used in agriculture, leading to more than 23,000 emergency room visits a year in the US. This antidote would help both victims of a terrorist attack, and those poisoned on the job.

Most people imagine the aftermath of a nuclear attack as a blighted, post-Apocalyptic hellscape traversed by dazed survivors and desperate cannibals. The DTRA imagines a lot of paperwork. The DTRA, the agency tasked to “safeguard the United States and its allies from weapons of mass destruction,” apparently has a lot of trouble generating new forms, especially for those who aren’t “engineering or technically inclined.” They need a new program for generating paper work, and in the solicitation they explicitly mention “Turbo Tax” as an example.

Commercial Application: I don’t know if you’ve ever had to fill out the paperwork involved with getting radiation mutants to fight it out in the Thunderdome, but nothing saves time in a nuke-scarred future like easy-to-understand forms.

The geniuses at DARPA have finally noticed what teachers have known for centuries: students learn less when they aren’t motivated and don’t pay attention. In fact, the ability to motivate students and get them interested in the material separates a good teacher from a bad teacher. And apparently, it also separates a good teacher from a robot teacher.

DARPA found that robot teachers don’t inspire students to learn like human teachers, and they want to change that. This program would create a suite of facial recognition, tonal inflection, and gestural sensors that determine when students stop paying attention. If the computer sees the student drifting off, it adapts, changing its teaching methods until the student reengages with the class. Thus, the computer instructor becomes as responsive as the human teacher. Basically, this is Dead Poets Society meets Robocop.

Commercial Application: Parent-teacher conferences may look a lot different in the future.