This common toothpaste ingredient could be wreaking havoc on your gut

Triclosan is everywhere, but its days seem to be numbered. 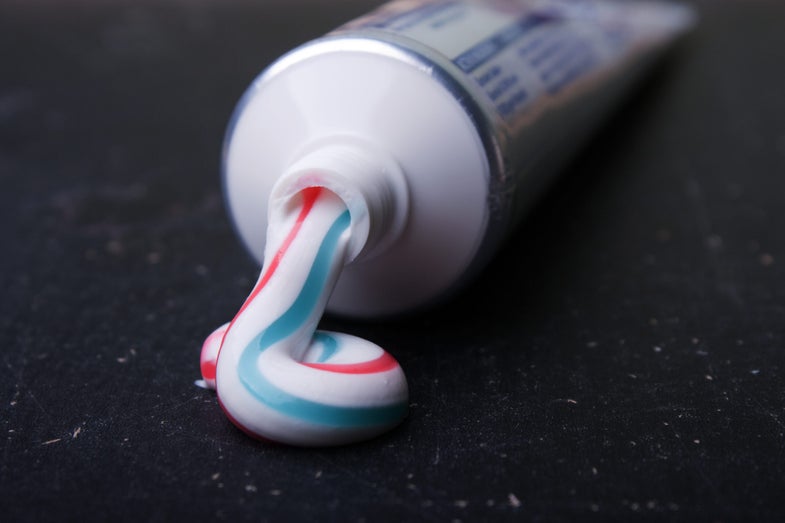 Even if you’ve never heard of it, you’ve almost certainly come across triclosan. A highly effective antibacterial and antifungal ingredient, triclosan is found in all kinds of toothpastes, hand sanitizers, deodorants, mouthwashes, detergents, cleaning supplies—if you use household products, you’re interacting with triclosan every day. So it’s worrying that a new study, published in Science Translation Medicine on Wednesday, suggests that triclosan exposure could increase rates of colitis and colon cancer.

In the new study, led by a group of food scientists at the University of Massachusetts, Amherst, the research team fed different groups of laboratory mice—some healthy, some engineered or induced with some disease of some sort—water spiked with triclosan for three weeks, to emulate the levels found in people who had used triclosan-containing toothpaste for two weeks. All of those mice experienced exacerbated gut problems of some sort. Inflammation in the colon sprung up, leading to symptoms like rectal bleeding, diarrhea, abdominal pain, and even reduced lifespan.

It all comes down to what happens to your gut microbiome. It seems that triclosan devastated the diversity of bacteria found in the gut microbiome of those mice, and in particular killed off populations of Bifidobacterium, a “good” bacteria. The chemical transformed the intestinal flora into something antagonistic to the intestinal tissue, eliciting an inflammatory response from the body, as well as encouraging more aggressive tumor development in mice who were already battling colon cancer. This was only underscored by the fact that mice bred without gut bacteria did not experience inflammation even after exposure to triclosan.

Still, while distortions in the gut microbiome led to inflammation, it wasn’t the only key factor. The researchers also noticed that other groups of mice lacking protein called Toll-like receptor 4, important in the inflammatory response of the body, were also immune to the deleterious effects of triclosan. Without the inflammation, triclosan exposure didn’t do much to displease the gut.

Triclosan is used in thousands of different consumer products. Although the FDA banned triclosan in hand soaps and body washes in 2016, citing safety concerns and skepticism that triclosan worked any better than regular soap and water, it’s still very widely used in other products. Naturally, it finds its way into the human body—especially through everyday toothpaste use—with the research team pointing out that a National Health and Nutrition Examination Survey found traces of TCA in 75 percent of urine samples in American individuals. It’s among the top 10 biggest pollutants of U.S rivers.

When it comes to triclosan’s effects on human health, “we know very little for certain,” says Paul Terry, an epidemiologist at the University of Tennessee who was not involved with the study. “It appears to prevent gingivitis when present in toothpaste, although there are other ways to prevent gingivitis. Triclosan exposure may have health consequences, but these are not clear.” And while it’s billed as an antibacterial that’s supposed to keep products safe from germs, triclosan is “certainly not a necessary ingredient in any consumer product.” Its use is already being phased out in many cases.

Terry thinks the findings make sense, and raise serious concerns, but he’s keen on seeing confirmation, especially as it pertains to human health. A study on rodents is hardly enough to proclaim continued triclosan exposure will destroy our guts.

Patrick McNamara, an environmental engineer at Marquette University who wasn’t involved in the study, finds triclosan worrisome not just as a direct hazard to human health, but also as a contributor to antibiotic resistance in many pathogens. “There’s certainly more concern about triclosan than there is benefit,” he says. “It has no added benefit in soap for washing hands. I personally avoid products that contain it, especially for my young children. The red flags around it are numerous and the benefits limited. Several hospitals have eliminated using it.”

At this point, there seem to be very few defenders of continued triclosan use in products, while the backlash is only mounting.