America Reflects On The Bomb, 70 Years After Hiroshima 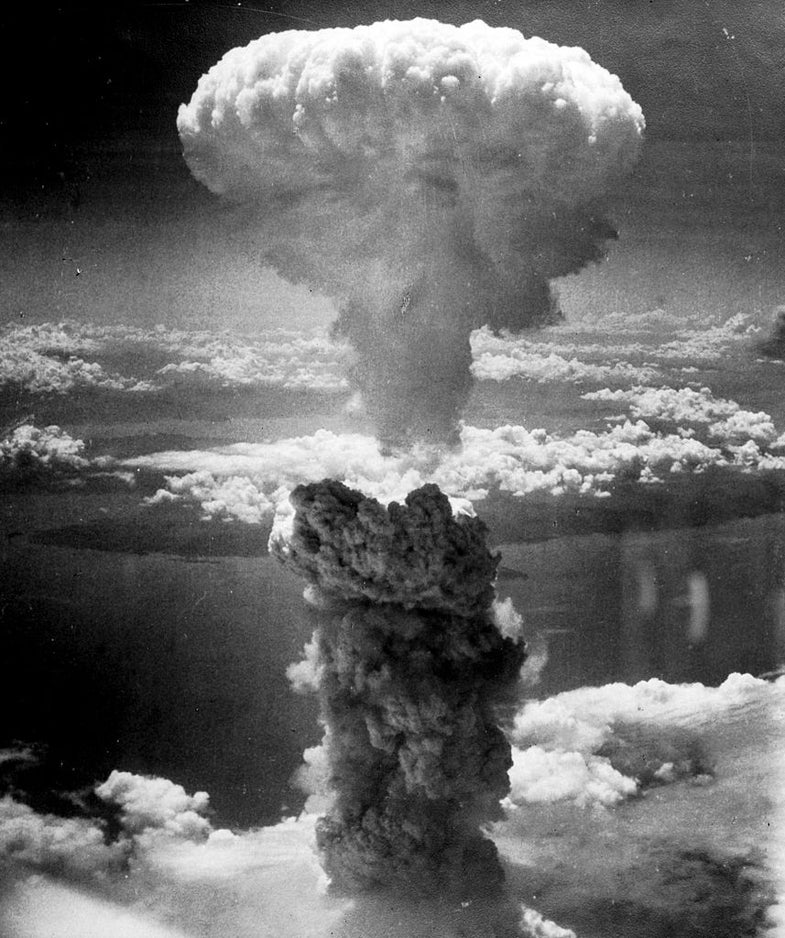 For America, World War II ended in a dark mirror image of the way our involvement began. The December 7th, 1941 attack on Pearl Harbor was an unannounced pre-emptive strike by Japan on a military base. America’s August 6th, 1945 atomic bombing of Hiroshima, and the subsequent August 9th atomic bombing of Nagasaki, came at the end of an already long war. American bombers had torched many other cities in Japan previously; Hiroshima and Nagasaki were largely untouched by conventional bombs, instead slotted as targets for the first, and to date only, uses of nuclear weapons in anger.

Last year, Popular Science looked into our archives to see how we covered the bombings in 1945. On the shelves in August of that year, our issue contained an argument that bombardment with poison gas, a weapon of mass destruction, was needed to end the war. The September issue, published after the world knew of the unique bombs dropped on Japan, includes a statement by the editors entitled “Annihilation Bomb – Friend or Foe?” that notes just how unprecedented this explosion was:

The statement ended on an optimistic note, looking to the coming scientific age and the long task of turning the energy harnessed in the atom to peaceful purposes.

In “How Physics Drove the Design of the Atomic Bombs Dropped,” Smithsonian Magazine examines the science behind the first two atomic bombs, Little Boy and Fat Man, and the attempted but unsuccessful “Thin Man” design:

To commemorate the occasion, The New Yorker put its August 1946 story “Hiroshima” online. Reporter John Hersey recounts six narratives of the day from people present in the city for the bombing. The full piece is worth reading in full. All of it is haunting; here is the opening of one narrative:

The Bulletin of the Atomic Scientists, perhaps best known for maintaining a Doomsday Clock for humanity, this week published the story of the Nagasaki mission, as told by Frederick L. Ashworth, the operations officer in command of the Fat Man bomb on board the plane. Ashworth recounts the harrowing, mishap-filled flight:

Japan, surrendered and rebuilt after World War II, became a staunch American ally. To honor America’s bicentennial, Japanese bonsai master Masaru Yamaki donated a bonsai pine to Washington’s National Arboretum in 1976. The 390-year-old tree, it turns out, was less than two miles from Ground Zero in Hiroshima, and survived the blast by being up against a wall. The Washington Post has the full story.

The Cold War and the prospect of global nuclear annihilation dominated thought in the decades since the blast. No country has used an atomic weapon in anger since the war, though their spread still remains a paramount concern. Yesterday, President Obama gave a speech at American University to make the case for a deal, negotiated with Iran, designed to curtail the development of an Iranian nuclear weapon. No country since the United States has used a nuclear weapon in war.

There have been a bunch of nuclear tests since then, though. Here’s a video timeline of every nuclear test since the first, at the Trinity Site in New Mexico in July 1945:

In “Seven decades after Hiroshima, is there still a nuclear taboo?, William Burr and Jeffrey Kimball look at the long history of the weapons’ non-use. They note that, while the United States hasn’t used a nuclear weapon again, policy makers and military planners sometimes still allude to the arsenal and threaten its use.

American public opinion is also moving away from support for the past bombings. From Pew:

Reflections on the bombing extend not just to policy makers and the general public, but to craft brewers and artists. For the 70th anniversary of Hiroshima, the United Kingdom’s Hardknott Brewery made a “Nuclear Sunset” beer. Inspired by a Japanese wheat beer and made as much in connection to the nuclear energy industry as the nuclear weapons, perhaps its orange peel, orange juice coriander and nutmeg notes add a moment of peace to contemplation about nuclear power.

My favorite meditation on the topic instead comes in infographic form. Made by Matthew Lucas, the three infographics are shaped to match a blast, a targeting reticle, and an atom. Built from a timeline of bomb development, a list of atomic casualties, and bomb development sites, that capture the scale of the effort that went into unleashing such a weapon on the world, and the scale of the harm done.