C-Fu: The Tofu Made Of 100 Percent Mealworm Protein

Fry it up with some sesame oil and ginger 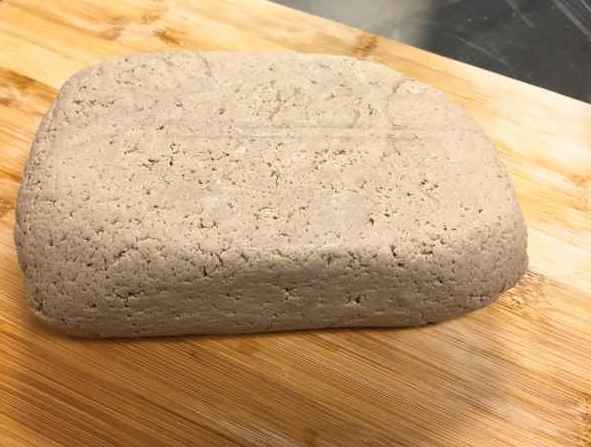 We haven’t tasted it yet, but we love it already. A team of graduate students at Cornell University created a tofu-like product made entirely with protein taken from mealworms, the Cornell Daily Sun reports. The product is called ‘c-fu,’ which combines the Chinese word for curd—”to-fu” in Chinese means “bean curd”—with the letter “C” because the original c-fu was made with cricket proteins. However, in the spirit of improvement, the team later found that mealworm-fu is tastier than cricket-fu.

Like other insect food products, c-fu is aimed at creating something that’s as appealing as meat, but has a lighter impact on the environment. Bugs use less land, eat less food, and emit less planet-warming gases per pound of protein they make, compared to larger animals such as cattle and poultry. In a blog post, the team estimated that an area the size of Rhode Island, full of farmed mealworms, would feed 2 billion people.

As for the appeal, team members have posted some nice photos of c-fu dishes on their blog. They also filmed their classmates’ reactions to trying the stuff. “It’s pretty good,” one tester opines. “It tastes like a really firm tofu,” offers another.

To make the mealworm cubes, the Cornell students developed a way to isolate the protein from ground-up worms and to restructure the proteins into tofu-like blocks. Although it takes 10,000 mealworms to make about one pound of c-fu, the resulting product has about as much protein pound-for-pound as egg, and it has more protein than tofu, the team reports. It also contains omega-3 and omega-6 fatty acids. Diets rich in those nutrients are associated with lower risks for heart disease.

The team will present c-fu at a conference called Thought For Food next month. There, it’ll be competing for up to $10,000 in seed funding, to turn c-fu into a supermarket product.