An ode to organ meats 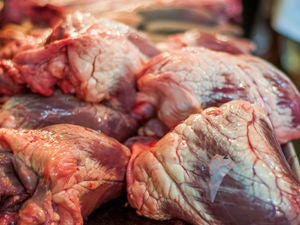 Look at all that flavorful fat. Wikimedia Commons
SHARE

Most aphrodisiacs don’t work. But you know what does bump up your lover’s libido? Demonstrating your burning passion by showing how much you care about their nutrition. Feed them a heart to fuel their love.

Eating a heart might sound gross, especially if you’re picturing a bloody sacrifice a la Game of Thrones, but they’re actually quite delicious. Hearts are made of muscle, just like the other meat you eat, though the heart muscle is structured differently in a way that makes the texture unlike a standard steak or chicken breast. They’re slightly tougher than normal meat because the heart gets so much use, so think of them like a piece of chuck or a beef shoulder—you have to cook them right to keep them from being too tough. But the flavor payoff is worth it.

For something like a chicken heart, try marinating first before you grill or sauté. If you’re looking for a heart that’s a little heartier, have a cow. You can cut a beef heart into strips to pan fry it, throw it on the grill, or braise it. Bonus: cutting it into strips will make it look less like an actual heart (unless you were going for that, in which case toss that puppy on the grill whole).

Organ meats in general have lots of vitamin B12, which you need to keep your blood cells and neurological system healthy. Hearts also have plenty of iron and zinc, without the added risk of giving you too much vitamin A—beef livers contain a lot of it, and overdoses of the water-soluble vitamin can impair your own liver function. There’s also quite a lot of protein in organ meats, though they also tend to be high in cholesterol.

And if you’re worried about spending too much on your date, just remember that organ meats are pretty cheap. All those other suckers are paying top dollar for a nice steak when they could be roasting up a heart for their soulmate. Sure, they’re cheap because no one wants them, but that just means you’re getting in on the ground level. Back in World War II—when the U.S. was worried about protein rationing—the Committee on Food Habits came up with a scheme to get people to eat more organ meat. They figured out that women, who made most of their family’s food decisions, weren’t buying livers and hearts because they thought these cuts were only suitable for the lower classes—or for feeding to pets and livestock. So lecturing housewives on the benefits of organ meat wasn’t enough—when the government tried, only about three percent of women felt convinced to serve organs up at home. Instead, they had to get the ladies to talk through their issues with organ meat amongst themselves. Once they felt they were a part of the decision, about a third of the wives wanted to serve their families wholesome hearts.

So if your significant other is hesitant to eat a whole heart, try to involve him or her in the decision-making process. Persuade them that organs are the best aphrodisiacs—plus they’re already in the shape of a heart, literally, so you won’t have to do any Pinterest crafting to make your dinner look seasonally appropriate. Just fire up the broiler and eat your heart out.