WTF are purple carrots and where did they come from? 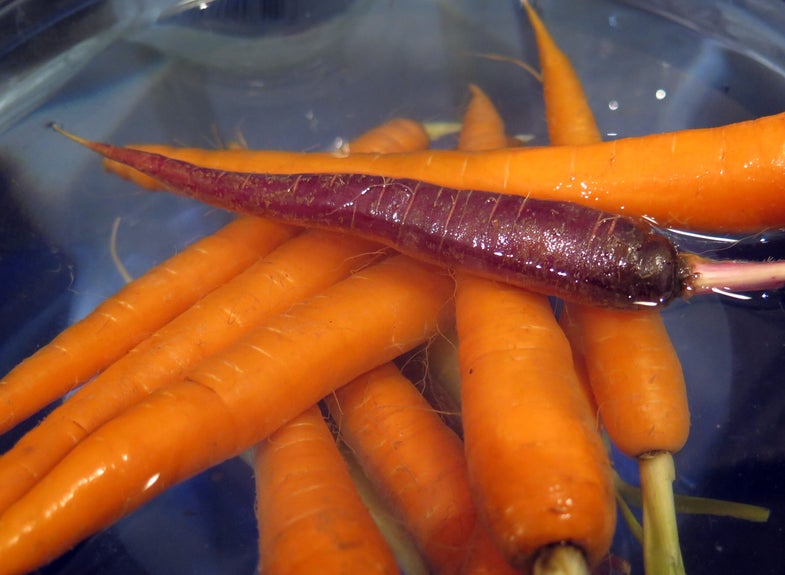 Purple is the new black. The original carrots were purple and yellow, and lately they've been coming back into style in America. Robert Couse-Baker via Flickr cc by 2.0
SHARE

A few weeks ago my husband came home from the grocery store with something mind-blowing: it was a bag of carrots, but in technicolor. Mixed in with the usual orange sticks were yellow carrots, the color of potatoes, and others so deeply purple they were almost black. We cooked them, and I turned over to the dark side.

Purple carrots have been around farmers’ markets for a while now, but more recently they’ve gone mainstream. Pretty soon we might have a full-fledged food fad on our hands. So where did the plum-colored carrot come from, and why is it showing up in my grocery store all of a sudden?

While most of us in America have only ever seen orange carrots (at least until recently), the first cultivated carrots were purple and yellow.

Carrots were domesticated in Afghanistan and spread to the eastern Mediterranean about a thousand years ago. They reached Europe and China in the 1300s. By the early 1500s, orange carrots could be found in Italy, Spain, and Germany. But purple, yellow, red, and white varieties persisted in Asia and the Middle East.

Nobody’s really sure how the orange carrot came to take over most of the world. Early reports suggested that purple carrots had a better flavor than white, but purple might have fallen out of favor because they tend to leach a dark pigment onto whatever they’re cooked with. After that, orange carrots might have got the jump on white carrots simply because it was easier to grow them.

Philipp Simon, a carrot geneticist with the U.S. Department of Agriculture, is partially responsible for bringing the purple carrot back into our lives. He and his team began working with purple carrots from Syria 35 years ago. They wanted to see if purple carrots harbored any genes that could help make orange carrots resistant to diseases and pests, mostly to help farmers.

“In my wildest dreams I didn’t think that this would come back as a color for consumers,” says Simon.

Simon’s team found several varieties of purple carrot that were resistant a type of soil nematode that attacks plant roots. Orange carrots have no resistance to these pests, so the USDA spent more than a decade crossing the resistant purple carrots to the orange ones that Americans know and love. The variety that combines the best from both worlds is now available to seed companies and farmers big and small.

In addition to the orange carrot with nematode resistance, Simon and other cross-breeders have produced offshoots in all shape and size combinations.

“The major purpose of my project is to prepare genetic stocks that carrot breeders will need in the future,” says Simon. “I have no crystal ball, but we talk to growers and consumers. We look at carrots and say, ‘Might this be interesting?’”

The Organic Seed Alliance did indeed find some of those carrots creations interesting. The organization helped to introduce some of the new varieties to small-scale growers who were seeking novel products.

Then, seeing that the colorful carrots sold well and sometimes for higher prices, larger growers realized they could make a buck off of purple carrots as well. And that’s how they got into the cooler at a supermarket chain near you.

The potential nutritional benefits of colorful carrots also helped to make them appealing to consumers.

One study found that, compared to orange carrots, purple carrots contain twice the amount of alpha and beta carotene, which the body converts into vitamin A.

Although scientists are still debating the health benefits of antioxidants, it’s generally a good idea to eat a colorful assortment of fruits and veggies every day to make sure you’re getting a wide variety of vitamins and minerals. Rainbow-hued carrots can certainly help in that regard.

Our color options for carrots will soon become even more diverse. Simon and his team are currently working on a red carrot—a project that’s more difficult than it sounds.

Red carrots tend to grow woody and flower earlier than orange carrots. That’s not good because the carrot “puts all its energy into building flowers instead of a nice juicy root,” says Simon. His team is working on breeding that trait out of the red carrots, and they think they’ll have a nice, juicy red root ready for consumers within a few years.

After that, who knows? “There all kinds of colors out there that are really pretty interesting,” says Simon. “We’re looking at more combinations.”