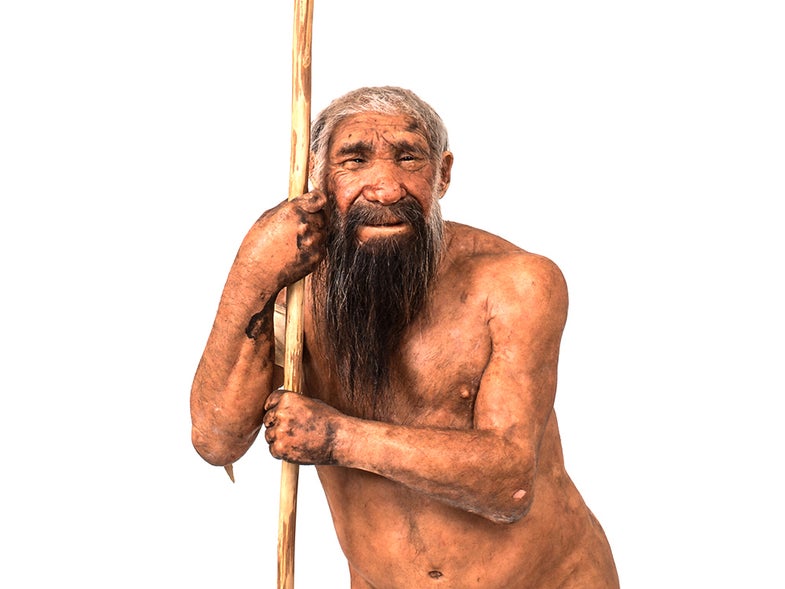 When Neanderthals are depicted in artistic reconstructions, they often have a spear in hand. Most archaeologists believe that Neanderthals were adept hunters, and we have found spears at Neanderthal sites. But our knowledge of how they used spears and how that compares with our own species has been inconclusive. Rather than using the spears for hunting, Neanderthals could have used them for self-defense or scavenging. But it turns out they didn’t. New research, published in Nature Ecology and Evolution, shows that Neanderthals did indeed use spears to hunt animals. The paper describes a collection of 120,000-year-old deer bones from the Neanderthal site of Neumark-Nord in Germany—two of which have perforations that clearly show impacts from a spear.

These unusual artifacts prove that the earliest spears were effective hunting weapons. In a paper accompanying the new study, I discuss what the findings mean for our knowledge of the lives of the Neanderthals.

Neanderthals evolved in part of Europe and Asia around 400,000 years ago, while our own species evolved in Africa. Scientists have traditionally thought that there were stark cultural and behavioral differences between Neanderthals and Homo sapiens, but recent discoveries have clarified that Neanderthals were more sophisticated than originally thought. For example, they cared for the vulnerable, buried their dead, and engaged in symbolic behaviors.

It would therefore make sense that Neanderthals also hunted using weapons—even some chimpanzees do this today. Previous research shows that the earliest Neanderthal spears are plain wooden sticks without stone points. These include a broken point of a spear from Clacton-on-Sea in the UK, dating to around 400,000 years ago, and multiple complete examples from the site of Schöningen in Germany, dating to around 300,000 years ago. A further wooden spear from Lehringen, Germany, dates to roughly the same period as Neumark-Nord, and was found with a butchered elephant.

Although scientists have not been able to demonstrate that these spears were used for hunting rather than power scavenging (stealing carcasses from carnivores) or self-defence, there were strong signs that Neanderthals did hunt for food. We know they ate meat, although recent studies of their teeth and faeces suggest that they consumed plants for food and possibly medicinal use as well.

In the absence of direct evidence, archaeologists typically rely on indirect clues to understand how a hominin species were getting their hands on animal products. If animal bones have carnivore tooth marks which are overlaid with marks made by cutting or hammering tools made by that species, then carnivores probably made the kill—with hominins taking advantage of the leftovers. If tool marks are underneath, then humans most likely actively hunted the animal.

Another sign of hunting is a large number of adult-sized manipulated animal carcasses at a site. This is because carnivores that hunt animals (and leave them for scavengers) tend to target weaker prey such as the young and old.

Archaeologists have found evidence of both adult animal carcasses and primary tool marks on their bones at several Neanderthal sites. This is also the case at Neumark-Nord, but what makes this site especially interesting is the discovery of two bones with what look like spear marks.

Because the lesions are complete, the study could investigate them with micro-CT imaging, which creates high-resolution 3D pictures using X-rays. The researchers could then do real experiments using wooden spears thrust into bones embedded in gelatin to create similar marks and compare the results.

They discovered that the shape and size of the bone damage correlates with a conical spear point, and the angle of the lesion on the deer pelvis is consistent with a spear being thrust into a deer in an upright position. It could potentially also have been hit with a thrown spear while lying down. The lesion on the second bone, a deer vertebra, does not have a clear angle, but the authors argue it is still consistent with thrusting.

The new study provides important evidence, however it is still unclear whether the early spears were used for thrusting, hand throwing or both. Thrown spears provide greater safety to the user in comparison with contact spears, but require a sophisticated understanding of how to design flight weapons.

Thrown weapons, particularly at longer distances, make it possible to hunt a greater variety of species in a larger number of environments. This is because it makes hunters less dependent on environments which have distinct natural features for trapping or ambushing animals from closer distances. The findings at the Neumark-Nord site show that Neanderthals were capable of hunting in densely forested landscapes, which would involve cooperation of a group of hunters.

The design of some Neanderthal spears suggests that they could have been thrown. The capacity for throwing was likely in place around 2m years ago—and it could have been a shared trait between our species and Neanderthals. Intriguingly, the remains of a Neanderthal’s left arm bone shows damage that matches trauma resulting from habitual throwing. This means that the possibility that Neanderthals designed throwing weapons remains strong, but we don’t know for sure.

By contrast, human hunter gatherers used hand-delivered spears for hunting, fishing and warfare. We don’t know how far Neanderthals would have been able to throw spears, but some recent human groups were capable of accurately throwing spears to distances as great as 30 to 50 metres.

The innovation of long-distance weaponry lies at the heart of questions around hunting strategies of different species of Homo. If Neanderthals were capable of powerful and accurate throws and some of their weapons were capable of flight, then differences between their hunting technologies compared with our own species may not be as great as is often suggested.

The findings are compelling because they provide clear evidence that Neanderthals used spears as penetrating weapons to kill their prey, laying to rest hypotheses that early spears were ineffective. With mounting evidence that Neanderthals were clever, creative, and capable, the results make a lot of sense. Given that our own species has not yet existed as long as the Neanderthals did, we should reconsider our tendency to underestimate them.

Annemieke Milks is a PhD candidate of Archaeology at UCL. This article was originally featured on The Conversation.