What does brain size have to do with intelligence?

Very little—even if it's very big. 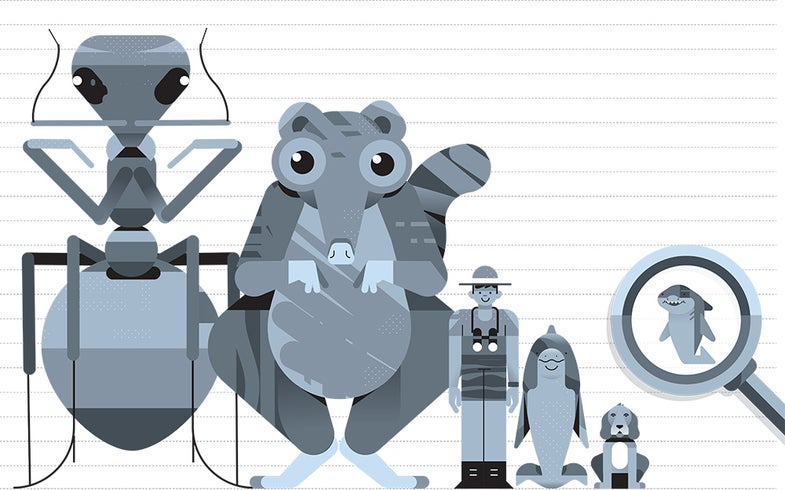 Researchers used to think brain-to-body-size ratio revealed intelligence because it showed how a species devoted energy to its cranium. They were utterly wrong. Other ratios better predict smarts, but there’s still no perfect metric. This ranking, by brain-to-body ratio, shows just how little we know about, well, knowing stuff.

There’s a reason ants think as a group. With just 250,000 brain cells per soldier, it takes a colony to rival the total neurons found in one human. Like all tiny critters, their noggins are enormous only when compared with their itty-bitty bodies. Brains can be only so small and still function.

Lest you think this metric falls apart only in the insect world, the noble tree shrew has the highest brain-to-body ratio of any mammal despite its puny size. Ten percent of its body weight is brain matter. But if these rodents are smarter than people, they sure keep quiet about it.

As part of the ongoing effort to put human intellect on top, some scientists argue we should ditch brain-to-body in favor of “encephalization quotient,” or EQ, which quantifies brain mass relative to the average for animals of that type and size. Ours are 7.4 times larger than expected.

Bottlenose dolphins’ ratio isn’t much to squeak about. They do better with EQ, clocking in around four or five times larger than average for their ilk. Their smarts might be due in part to spindle cells—large neurons thought to enable complex behaviors in great apes and a select few other species.

If man’s best friend seems dimmer than his wild cousins, it might be because a wolf-size dog has a significantly smaller brain. We’ve bred them to a state of eternal puppy-dom, so while one can hunt for itself, the other gets treats by being a very good boy. Who can say which species came out ahead?

Egad. Oft maligned as having a walnut-size brain, the great white actually has a larger, decentralized organ, Y-shaped and 2 feet long. Humans have around 62.5 times more brain mass per pound of flesh, but a shark’s gray matter seems focused on specific skills—like sniffing out seal blood.