Why it would have been impossible for a T. rex to stick out its tongue

Everything we thought we knew about dinosaur tongues is wrong. 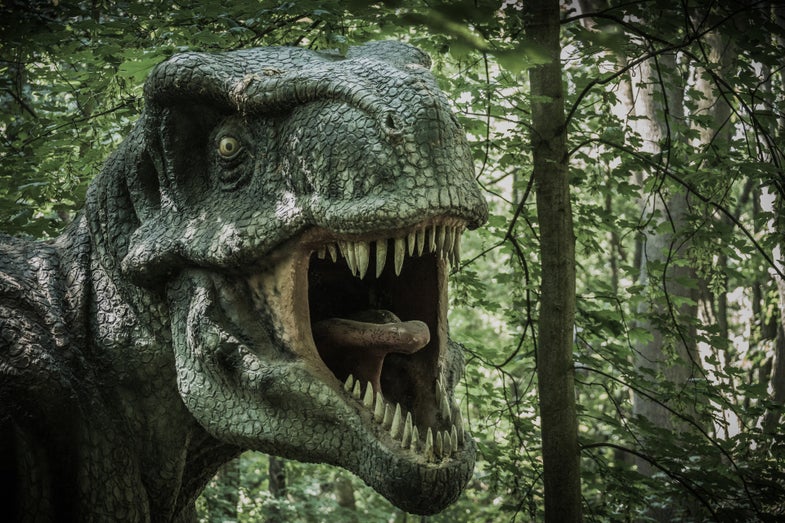 Many depictions show dinosaurs with long, lizard-like tongues. New research reveal most dinosaur tongues were rooted firmly to the base of their mouth. Public Domain Pictures
SHARE

A mouthful of giant, bone-crunching teeth might be the scariest thing about a dinosaur. But there’s something about the image of a wet, waggling Tyrannosaurus tongue that’s particularly disturbing. To our relief, researchers have discovered that most dinosaur tongues—including that of the mighty T. rex—couldn’t waggle much at all.

In a recent study, researchers compared fossilized hyoid bones—a horseshoe-shaped bone that anchors the tongue and supports the opening into your lungs—with those of crocodiles and birds, the closest living relatives to dinosaurs. The study led to some unexpected outcomes, mainly, that most depictions of dino tongues in popular culture are wrong. For some reason (maybe because Tyrannosaurus translates to “tyrant lizard” in Greek), many drawings show dinosaurs with long, lizard-like tongues. But this new research reveals most actually had tongues similar to crocodiles, flat and rooted to the bottom of the mouth.

“The surprising part we found was that most dinosaur hyoid bones are pretty boring,” says Julia Clarke, a paleontologist and co-author of the study published this week in PLOS One. “The evidence really argues for simple, limited tongue movement in most dinosaurs.”

But why think about a slick, fleshy organ if we don’t have to? What’s so great about a tongue, anyway? Without a tongue, we wouldn’t be able to chew, speak or swallow. Frogs rely on their tongues to gulp in air. The okapi, also known as a zebra giraffe, uses its 14-inch long tongue to clean its eyes and strip leaves off trees.

And according to Clarke’s research, there are many more tales an ancient tongue bone can tell, like the origin of flight. Unlike the stubby, simple hyoid bone seen in dinosaurs like the T. rex, researchers found a much more complex structure in pterosaurs—bird-like dinosaurs, or “winged lizards.”

The waterfall scene in The Lost World: Jurassic Park shows Julianne Moore getting licked by a T. rex (fast forward to 2:30). We now know such a tongue lick wouldn’t have been possible.

“We wanted to know when this crazy evolvement of tongues from bones happened,” Clarke says. “Only after the origin of flight [in vertebrates] do you get these Olympians of the bony tongue movement.”

If tongues didn’t creep you out before, they probably will now. Yes, that innocent looking tongue in a cheerful, chirping bird has a bone in it. The hyoid bone of today’s birds extends all the way from the back of its throat to the tip of its tongue. It’s this flexible bone that enables birds to stick their tongues all the way out (and maybe even a bit further). Hummingbirds have hyoids that are so long, it actually wraps around the skull and rests in the birds’ nares (aka bird nostrils). When unleashed, a hummingbird’s bony tongue can extend twice the length of its bill.

Noting the same structure in pterosaurs, researchers say it’s likely the evolution of the bony tongue and flying are connected. When arms evolved into wings, flying dinosaurs lost the ability to snatch up prey. Clarke says these advanced tongues could have served as a new means to procure food, a feature also seen in modern day birds.

A T. rex tongue is definitely not comparable to our own puny, pink pokers, but it is similar in its construction, made not of bone, but thick tissue and muscle. Because its hyoid bone is basically two, short rods that sit way back in the throat, the tongue was moored to the bottom of the mouth, making it impossible to fling it free like the flexible, bony tongue of a bird.

There was one oddity in the study Clarke couldn’t explain. Armored dinosaurs—like a stegosaurus or ankylosaurus—also had complex hyoids, even though they were very different animals than winged dinosaurs. Clarke says she’s also unsure what purpose the rooted tongue of a T. rex would have served, but based on observations of crocodiles—which have a similar simple hyoid bone—it had something to do with food. A flat tongue certainly makes sense for a crocodile, which swallows prey whole—a long, bony tongue would probably interfere with that. Or maybe the tongue was always meant to be a landing strip for the bright, blue birds that pick leftover meat out of crocs’ teeth. Either way, tongues can tell us a lot more than we thought.