Cause unknown; "not nuclear," says expert 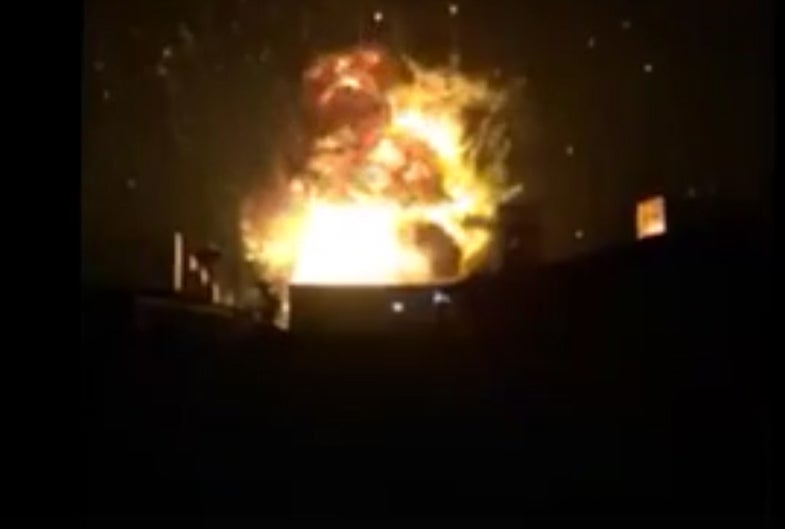 Half an hour before the blast, firefighters were on site, battling a blaze. While the cause of both the fire and the blast remain unknown, it’s possible that the actions taken by the firefighters to combat the fire instead caused the explosion. One of the chemicals known to be at the site was calcium carbide. Combined with water and fire, calcium carbide explodes. If firefighters blasted water onto the calcium carbide, that could have caused the blast. At present, the death toll stands at 56, with 720 people injured, including 58 in either serious or critical condition.

This morning, People’s Daily reports that the death toll in Tianjin has risen to at least 50, with 400 injured, and that the fires are at least initially under control. Shock waves were felt at least 6 miles beyond the blast site. Officials say the blast was roughly equivalent to 21 tons of TNT, and there is no clear answer yet as to what, exactly, blew up, or what caused the fire.

Below, some of the devastation:

The death toll stands at 7 so far, but the second blast trapped people so it’s possible that number will rise. People’s Daily is reporting that the fires are expected to keep burning for at least another hour. A Japanese weather satellite apparently captured the blast from space, its sensors picking up an area of heat like two Tetris pieces. Here’s what that area around the explosion looks like on the ground as the fires rage:

Chinese state media says the explosion has injured at least 300 people. The explosion happened at Tianjian Dongjiang Port Rui Hai International Logistics Co. Ltd, which handles the transport of dangerous and hazardous materials. It appears the first explosion is linked to “flammables” and the second to “oil”.

The explosion was certainly large enough to show up on seismographs, but that doesn’t make it the nuclear blast that “mushroom cloud” implies. Via direct message, Dan Kaszeta, an expert on chemical, biological, radiological and nuclear defense, was quick to tell Popular Science that the long flash of the blast in Tianjin indicated it wasn’t a nuclear explosion. Also, he said, the blasts clearly occurred in sequence, following a fire.

Here is video footage of the blast:

That explosion isn’t quite complete without the ensuing shockwave, which can be heard and almost felt in this footage captured nearby:

Tianjin, on the northwest coast of China, is a major port and hosts a free-trade zone, which means many foreign companies have manufacturing operations in the area.

There are already reports of casualties, though numbers at present are unclear, and it appears there are also power outages in several neighborhoods near the blast site.

More updates to come as they happen.