A recent descendent of Homo gets a complete skeleton. 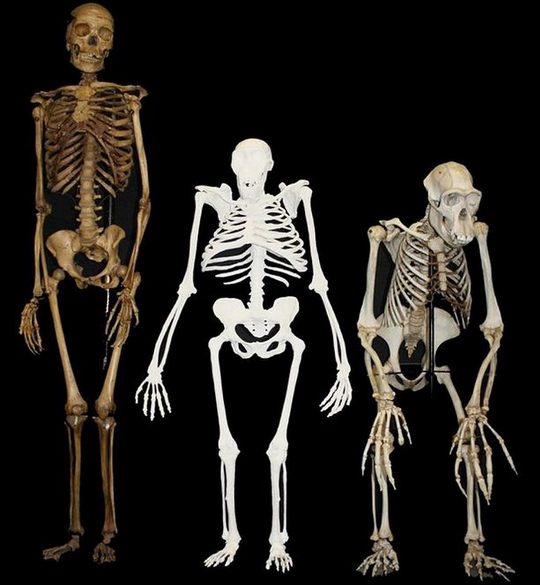 In 2008, researchers found remains of a few early human-like beings in a cave in South Africa. Now, they’ve pieced them together into one of the most complete skeletons of a human ancestor ever made.

The skeletons belong to a new species of australopithecine, named Australopithecus sediba, discovered for the first time at that cave five years ago. Australopithecines comprise several different species of hominids that roamed Africa from about 4 million to 2 million years ago. They varied in form; some were more chimp-like, some more human like. The new Au. sediba appears to be right in the middle, with chimp-like feet (pigeon-toed, with a small heel) but also walking more upright than apes.

It likely lived both on the ground and in trees–the researchers, from several universities around the world, think that it had more adaptations for tree-dwelling than, say, Au. afarensis, represented by the famous (and much older) Lucy skeleton. Those include exceedingly powerful shoulders, reminiscent of the arboreal orangutan. But it also had more delicate fingers than the apes, which could have been used for tool-making.

Au. sediba dates from about 2 million years ago, which makes it of much interest to scientists: that’s right around the time when the australopithecines gave way to Homo. Specifically found were a young male and an older female skeleton, possibly a mother and son, among others. The researchers took three incomplete skeletons and combined them to create the full single skeleton.

The findings are published in Science.