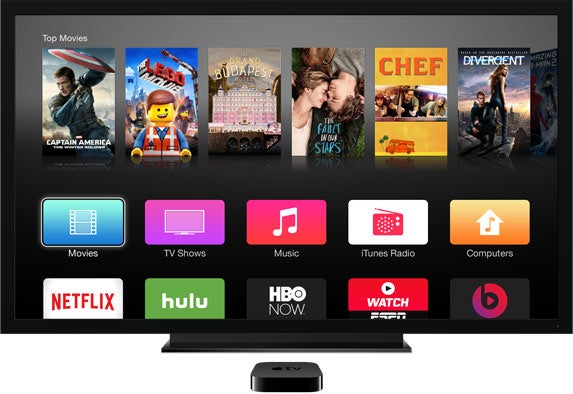 With Apple’s fall 2015 event coming soon many are focusing on the iPhone 6s. But the Apple TV is expected to get a significant upgrade, if rumors and recently reported leaks are to be believed. Cupertino’s set-top box saw a hardware revision three years after its release in 2007, but has kept quiet since. Next week, the Apple-branded Netflix-machine is ready to make some noise.

If “Hey Siri, give us a hint” means what we think it does, Apple could be readying to take a note from the Amazon’s playbook. The Amazon Echo put a voice assistant in Prime subscribers’ homes—offering similar functionality to Siri and Google Now’s voice services, but without requiring you use a mobile phone. Simply speaking up in the room of your choice would provide weather, news, music playback and more.

Apple could be planning something similar with its digital assistant. Like Amazon and their array of services, those tied in to Apple’s ecosystem will likely get the fullest benefit of Apple TV’s Siri. Set-top boxes like Amazon’s Fire TV and Google’s Android TV have had voice services for a while in the form of search and controlling the units out loud. Knowing users contacts, calendar appointments and other data kept on the iPhone/iCloud however could play a large role in completing the connected home.

And if a recent report from Buzzfeed is true, Apple could offer something even more compelling to viewers: universal search, allowing you to see all the places you can watch a particular show or movie, such as on iTunes or Netflix, and let you pick between them.

But it may not be all about Siri. Other rumors surrounding the Apple TV hint at an app SDK for the set-top box coming for developers. Meaning app-makers will be able to create applications for the Apple TV just like they do on iOS. Imagine summoning a cab to your place via Siri with with an Uber app for Apple TV, or dictating a text to a friend without having to get up and find your phone. The current Apple TV circa 2010 does offer a variety of “apps” from various networks and studios, but those were made in conjunction with Apple, not from independent third-party developers. An app store would mean opening the floodgates to way more apps, similar to what the App Store and Mac App Store offer.

Some of the most popular apps come in the form of games. And as game consoles such as PS4 and XBox One have shown — making hundreds of millions in software sales alone — playing video games on your TV while planted on a couch is a winning formula. The current Apple TV supports AirPlay, allowing iOS users to wirelessly view games they play on their iPhone and iPad on the TV. Support of native Apple TV apps could encourage developers to make games specifically for the set-top box. Coupled with rumors of a new Touchpad remote, the gaming implications show how the new Apple TV could steal the spotlight from the iPhone 6s’s at Cupertino’s fall event. It could also help Apple offer a more competitive product against Amazon’s Fire TV, which so far remains the only major set-top box to offers support for console-style gaming.

With additional features comes a raised admission price. According to Buzzfeed, the new Apple TV will cost $149—up from the $69 it costs currently. Insider info from 9to5Mac claims that Apple will offer both its old set-top box at a lower price (it’s currently $99) as well as the new one.

Both are expected to be announced on September 9 in San Francisco. Apple continues to keep quiet on what to expect, but where there’s smoke there’s fire. We’ve heard too much regarding the little TV box to not see some substantial updates to Apple’s streaming box. Updates to the Apple TV remote that brought a touchpad or buttons for gaming and a microphone for Siri could make these updates no-brainer additions.