You Can Charge Your iPhone 6s Wirelessly, But Is It Worth It? 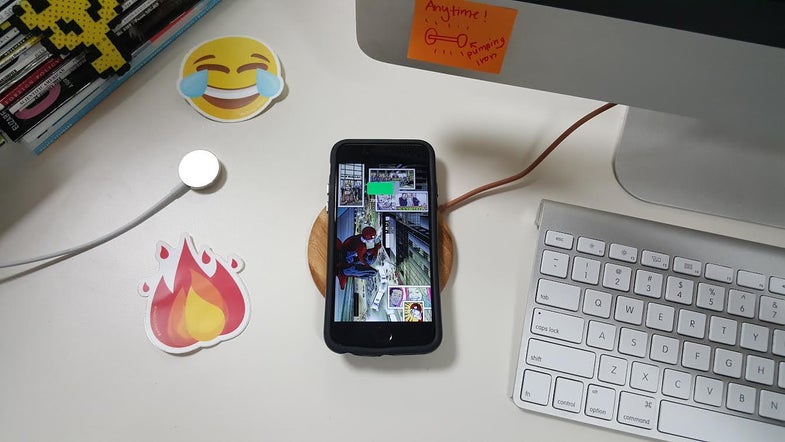 With the help of Fone Salesman's Qi patch, the iPhone can be retro-fitted with wireless charging. Xavier Harding
SHARE 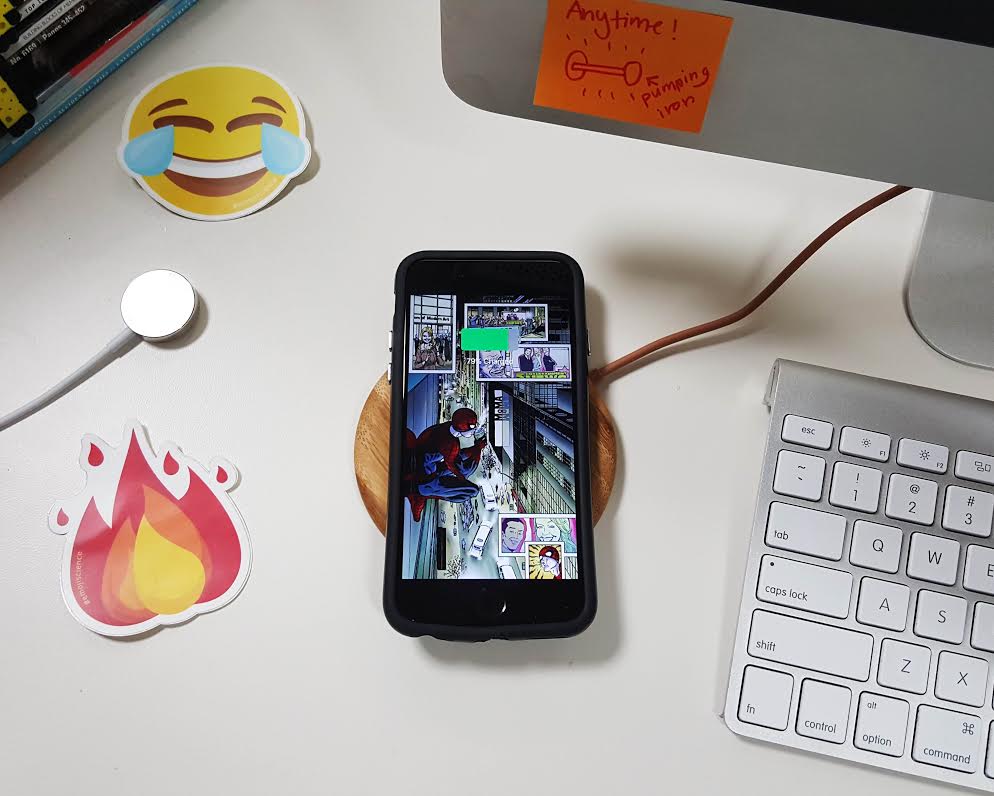 With the help of Fone Salesman’s Qi patch, the iPhone can be retro-fitted with wireless charging. Similar to what comes with the Apple Watch charger by default.

September’s iPhone 6S release added many features to take on the competition. A 12-megapixel camera, faster fingerprint sensor and 3D Touch impressed during our iPhone 6S review. But what wasn’t included in the body of the now-unbendable Apple phone is a feature found in the latest Samsung Galaxy S6 and other Android devices: wireless charging.

Moving power magically between objects without a cord is something many may have encountered in electric toothbrushes. By placing the toothbrush on its stand, energy is transferred from the metal plate to the brush. Similar charging technology can be found in Android devices like the Samsung Galaxy S6, LG G4 and Nexus 5. But just because Apple didn’t include it inside the latest iPhone doesn’t mean iOS users don’t have options.

After using the Aerelight lamp to charge an iPhone case that supported inductive charging, I was hooked. When sitting at my desk, picking up my phone for use and setting it down to charge without wires was too convenient. So I contacted Fonesalesman to outfit my iPhone 6S with one of their wireless charging patches and received a wooden charging puck to go along with it. (The patch and puck usually total around $75-95. Cheaper alternatives exist on Amazon.)

Here are my impressions of a life without wires. But first, a primer.

How Does Wireless Charging Work?

Much like hoverboards and hoverboards, the term “wireless charging” is a bit misleading. Inductive charging isn’t wireless like Wi-Fi or cell service is—i.e.: don’t expect to grab a charge as you’re traversing your city’s streets. But it’s still slightly cooler than plugging in your phone. Most inductive chargers make use of coils to transfer energy. When given power, a transmitter coil (found in the wooden puck) can toss energy over to a receiver coil (found in the phone patch) with the help of a magnetic field. Which is well-illustrated here. This only works when both coils are very close to each other.

The “wireless charging” moniker is also misleading because really, there are still wires involved. Our Fonesalesman wooden puck needed to be plugged in via micro-USB to work. And other charging objects like the Aerelight lamp we initially tested or Ikea’s line of powered-up furniture need to be plugged in somehow too. Plugging in the lamp wasn’t too out of the ordinary, however, since light sources without inductive charging require this anyway.

Similar to Lightning versus micro-USB cables, not all wireless charging standards are the same. The most popular is currently Qi: found in the aforementioned Android devices, Ikea’s furniture, this Fonesalesman puck/patch combo and more. Our patch stuck onto the back of the phone and plugged into the charging port. It uses an adhesive that’s easy to rinse off after you remove the patch. 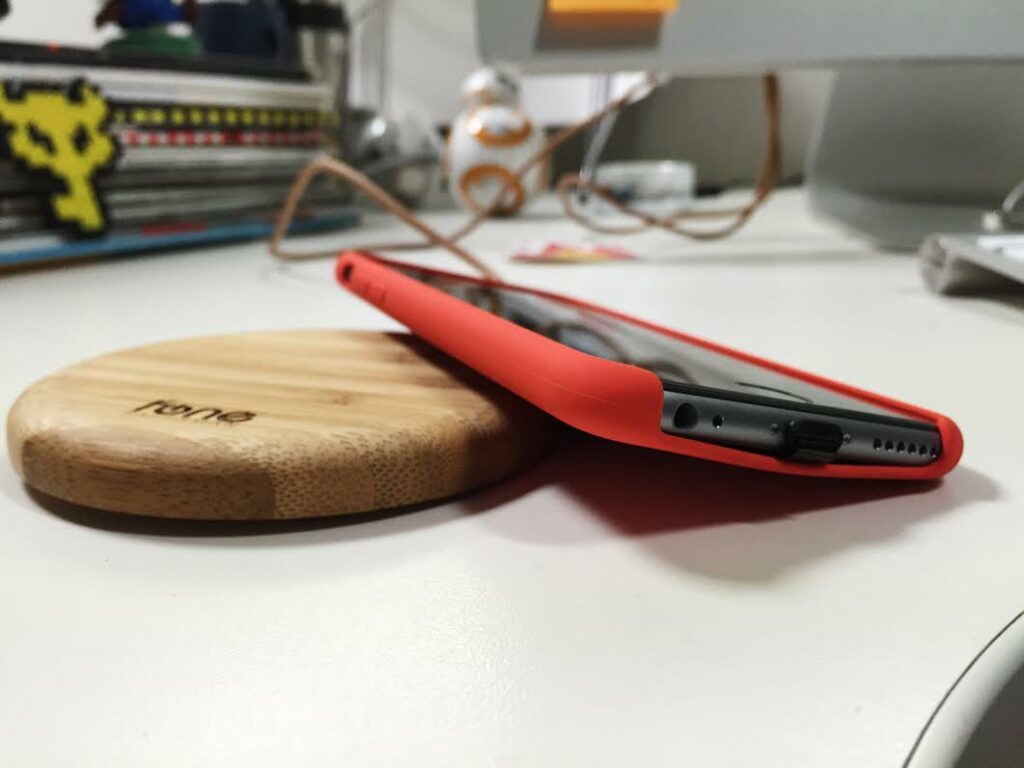 The main advantage of inductive charging is convenience. Considering the numerous times we put down our phones, it only makes sense that they grab a quick charge when we do. Unfortunately all furniture isn’t equipped with inductive charging—just like all phones aren’t capable of wirelessly charging. But powering up your phone in this way hints at a future where this is the case and it’s kind of cool. For now, the next best option is a designated portion of your desk that has power magically flowing out of it. And setting your phone on it keeps your battery at a respectable level always.

The patch itself is kind of an eyesore. But we were able to throw on a case and hide some of the plumbing for maximum cool effect. Apple’s standard silicone case works well with this as does the Madera iPhone 6 case we tried it with. My favorite case, the bumper, unfortunately doesn’t do a good job of tucking in the Fonesalesman charging patch, but the setup still works—even if having the patch exposed gets in the way more than we’d like.

iPhone users that make use of a case will have the best experience with the patch, especially since it will work with your case of choice and doesn’t require the (more often that not) bulkier wireless charging solutions. But, charging your phone in this way does have its drawbacks… 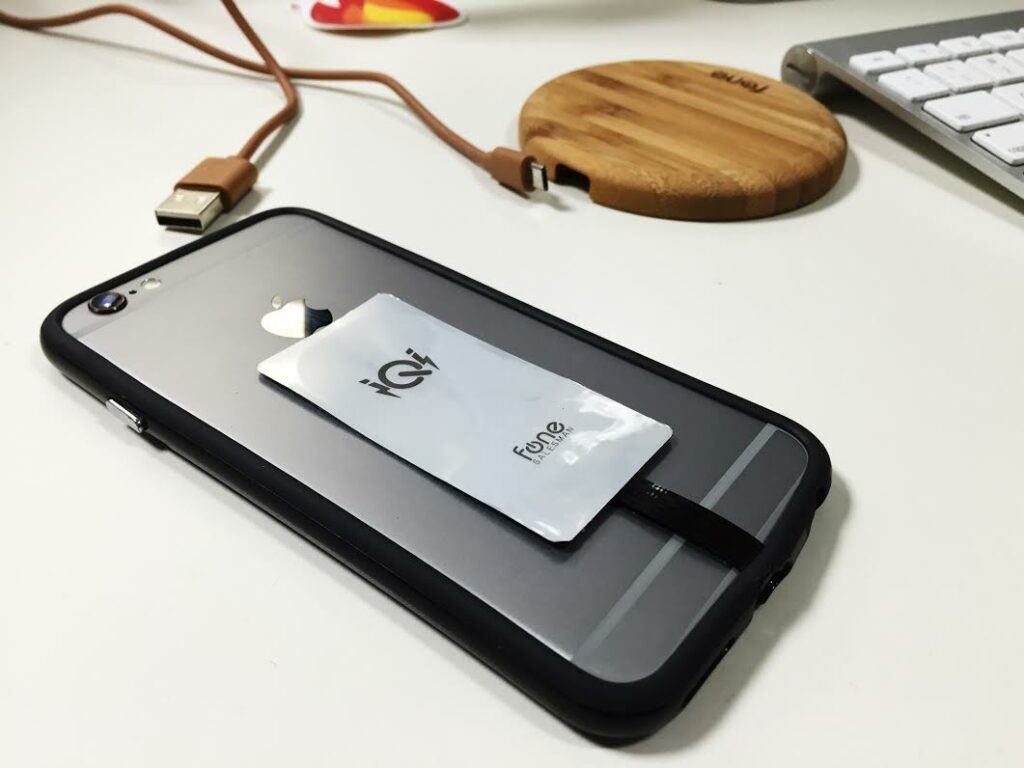 The iPhone 6S Qi patch works with many cases. But is a slight hassle with my personal favorite case

It’s not all sunshine and green battery icons. Like any device that supports wireless charging, using your phone while it charges becomes a bit harder. When plugged in, the device is movable within a radius dictated by the cord’s length. When wirelessly charging, you’re forced to swipe, tap and pinch against your table. You also can’t put your phone face-down and expect it to charge in case you wanted to ignore distractions and bury your head in some work. At least not with the iPhone solutions or the even the inductive-capable Galaxy S6 Edge Plus we tried.

And then there are the inductive patch-specific wireless charging problems. While on capable Samsung or Nexus phones the wireless charging port remains exposed, this is not the case with iPhone inductive solutions. Meaning that tucking the Fonesalesman patch behind a case and then plugging in your phone to play music in the car, using it with a portable battery pack or doing anything Lightning port-related becomes very difficult, unless you’re willing to tear apart your charging setup.

And then there’s the fact this is a third-party solution. Not only is this charging solution not made by Apple, the Fonesalesman patch-and-puck combo isn’t MFi certified—it hasn’t officially received Apple’s seal of approval since it doesn’t use the company’s Lightning standard. We haven’t noticed any negative effects using the Fonesalesman’s charger but proceed with caution. Your warranty may thank you for it.

Also your phone, when on its back, will never lie flat on a table. Even when the patch is hidden inside a case. Wobbly table use and TouchID is something to get used to. 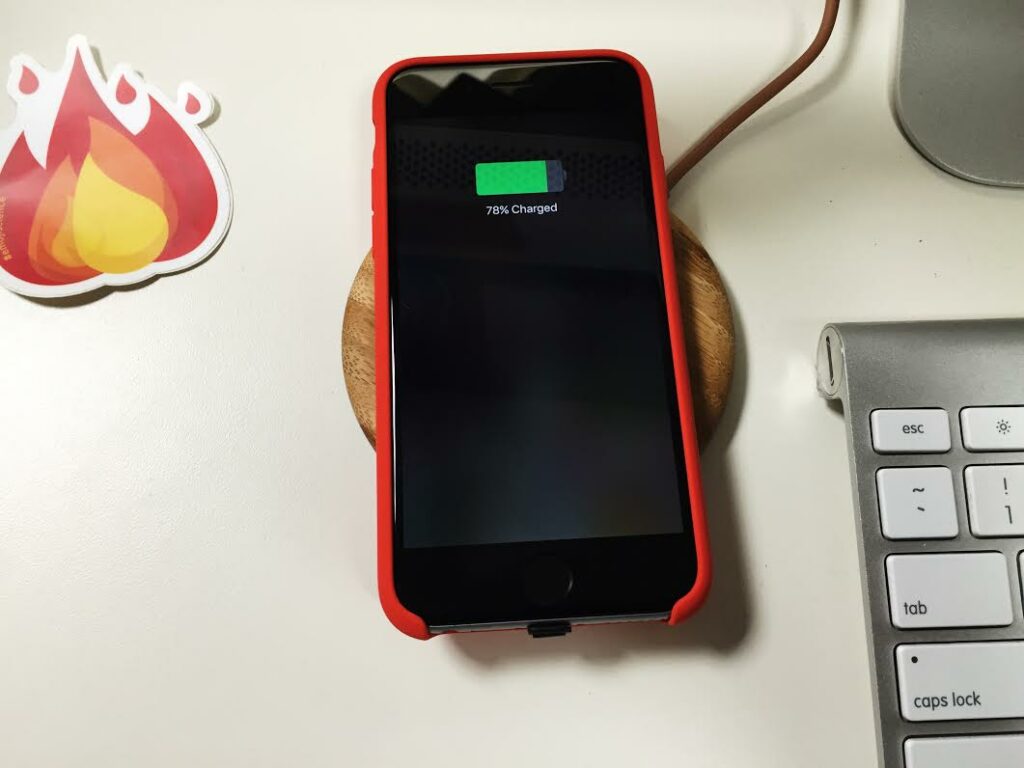 Inductive charging is a game of trade-offs. Being able to drop your phone on a table and suddenly enter charging mode is convenient, and surely turns some heads. You may even receive a nod-of-approval from Qi fans leading a similar lifestyle.

But if you want cordless charging, you’ll have to be willing to live with the negatives—at least at the moment on iOS devices. Having a bulky case or sticky patch are the quickest solutions to retro-fit your device with a wireless power setup. And even if you can slyly tuck your Qi patch behind a case, your Lightning port will be blocked—interrupting spontaneous phone plug-ins with a quick undressing of your device. This situation definitely isn’t ideal when on the road or going out for the night. But we found when at our work desk, switching into patch-and-puck mode definitely made things more convenient.

Until Apple adds wireless charging to the iPhone 7—with their own in-house standard, of course—this is the best option iOS users have.