Apple’s 3D Touch Will Change How You Use The iPhone

Apple reacts to the competition with force 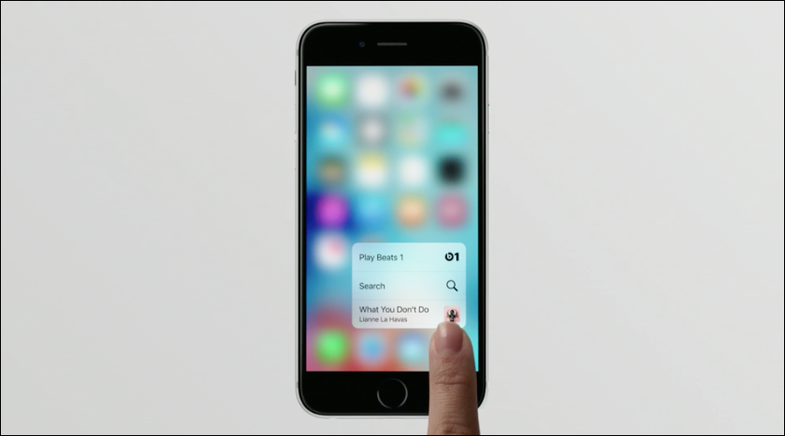 Force Touch entered the spotlight when the Apple Watch was introduced in 2014. By giving their touchscreen-enabled wearable the ability to sense pressure, users were able to deeply press into the screen to reveal hidden actions. Tapping on an object, for example, would choose it while giving the screen a Force Touch would reveal a menu of items or enable a different action to take place. The feature was later added to Apple’s 2014 Macbook and now its the iPhone 6S’s turn to use the force with 3D Touch.

How Will 3D Touch Be Used?

The iPhone 6S will make use of what Apple calls 3D Touch. Cupertino will take what they introduced with the Apple Watch a step further and apply it throughout iOS 9. When in the Mail app, for example, iPhone 6S users can use 3D Touch to preview an email and quickly close the message. Pressing hard enough will fully open the email.

On the device’s springboard, iPhone users can put 3D Touch to use for app shortcuts. Giving the Music app a tap with some pressure behind it can bring you quickly to search or Beats 1. Using Force Touch on the phone app icon brings up a list of favorites. Even third-party apps can make use of Apple’s pressure sensitivity functionality on the homescreen. Facebook, for example, will allow you to change your status or even check into locations from the home screen. 3D Touch can be used within third-party apps as well. In Instagram, pressing into a photo will bring up a preview of the picture.

Apple’s use of 3D Touch in iOS 9 will extend to the app switcher as well. Swiping from the edge with a forceful touch will reveal all recently opened applications.

Apple demoed gaming using 3D Touch at their fall event as well. When playing a game, users can now leave their fingers on screen and press down when it’s time to jump or shoot. Games like PixelToys’ app coming this holiday season will make use of 3D Touch.

Apple announced more than just 3D Touch for the iPhone 6s at their fall event. For 2015, those buying the flagship iPhone can also get the device in rose gold (pink) as well as silver gold and space gray. The iPhone 6S also ships with an improved camera, faster A9 processor and increased pixel density. Features kept the same include screen size, TouchID fingerprint sensor, and physical design though we could see this altered with the release of the iPhone 7.