Boxee's exclusive retail partner is none other than Walmart--which means lots of promotion for Boxee, but also means no Amazon. Here's why. 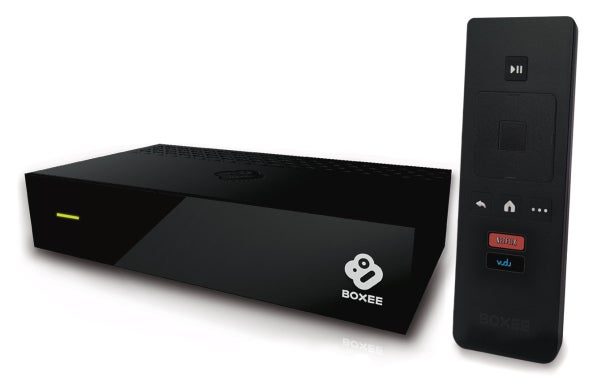 Boxee, the underdog startup which emerged from the hacker world to create some of the best and most interesting streaming media gadgets on the market, is doing its best to go mainstream. And what’s more mainstream than Walmart?

Today, Bloomberg broke the news that the new Boxee TV will be available, in brick-and-mortar stores at least, at Walmart. (It’ll still be available online, just about anywhere.) Boxee TV is different than, say, a Roku or Apple TV because it’s not so focused on apps; instead, it’s positioned as a way to watch TV better, by place-shifting and time-shifting your shows. That’s buzzwordy, but what it means is: you can watch any of the shows you record on your DVR whenever you want, wherever you want, on any device you want. It’s very cool.

But it’s still a streaming media box, and still has apps, which are still important. Netflix, Pandora, Spotify, YouTube, Vimeo–the Boxee TV has all that. Two major apps it doesn’t have are Hulu Plus and Amazon Instant Video. Hulu Plus is lacking, the CEO of Boxee tells me, mostly because of technical difficulties, but it certainly can’t be helping that Boxee is infamous for hacking Hulu to work on an early version of its software, against the wishes of NBC-Universal, Fox, and ABC-Disney, Hulu’s backers.

Amazon is more curious. What possible reason could Boxee have for not pushing to secure the rapidly improving service? Amazon has been beefing up their selection very quickly, and the fact that it’s available to all Amazon Prime subscribers gives it a huge built-in userbase. Well, here’s the answer: Boxee has a huge promotion deal with Walmart. Walmart will have Boxee endcaps in 3,000 of its stores, a major retail presence, and since Boxee’s advertising budget is pretty small, the fact that the Boxee TV will have a significant place in all of Walmart’s holiday ads will give the little black box a big boost.

Walmart, as it turns out, has a service of its own, purchased back in 2010, called Vudu. Vudu competes with the iTunes Video Store; you can buy shows for a couple of bucks the day after they air. It also competes with Amazon Instant Video. So, Boxee TV has a very nice Vudu app, and it does not have an Amazon Instant Video app of any kind. It may in the future, especially if the Boxee TV is a big success, but for now, nope. It’s all Walmart’s fault.