When We Weren’t Looking, A Star Passed Within 0.8 Lightyears Of Earth

Close encounters of the stellar kind 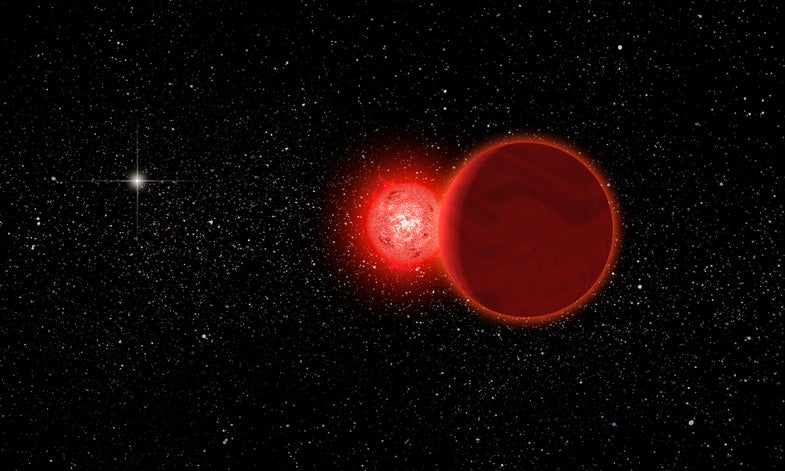 An artist's rendering of what it looked like when Scholz's star passed by our solar system 70,000 years ago. Scholz's star's travel companion, a brown dwarf is in the foreground. The bright white star to the left is our Sun. Michael Osadciw/University of Rochester
SHARE

70,000 years ago, earth was a pretty bleak place. Homo erectus had just gone extinct, and we were all in mourning. But while we were distracted by things like the near-extinction of our own species, some fantastic stuff was going on in the furthest reaches of our solar system, including a visit from a star and its sidekick, a brown dwarf–too large to be a planet, and too small and cool to be a star.

In a paper published this week in Astrophysical Journal Letters scientists found that 70,000 years ago the star grazed the outer reaches of the Oort cloud, the loose group of icy bodies on the outskirts of the solar system. The star is now 20 light years away from our solar system, and still moving away, but at its closest point, it came within 0.8 light years, or 5 trillion miles of Earth. For comparison, the closest star to us now is Proxima Centauri, 4.2 light years away.

The star is officially named WISE J072003.20-084651.2, but because no one wants to say that, it is nicknamed Scholz’s Star, after Ralf-Dieter Scholz, who discovered the star in 2013. Scholz’s Star hadn’t been formally observed before that because it is a red dwarf, an incredibly dim and common star. Even at its closest point to Earth, it is unlikely that it was visible to the naked eye. According to author of the paper Eric Mamajek it would only have been visible if it had a large flare, and that would have only lasted on a scale of minutes to hours.

And just because a star visited us once doesn’t mean we need to panic about what to do when another one decides to pop by unannounced. In a fantastic FAQ on Mamjek’s website, he notes that stars pass through the outer Oort cloud fairly often–about 10 every million years. But usually they aren’t big enough or close enough to do any damage to us (or send any comets on joyrides), and that any reports of death stars is greatly exaggerated.