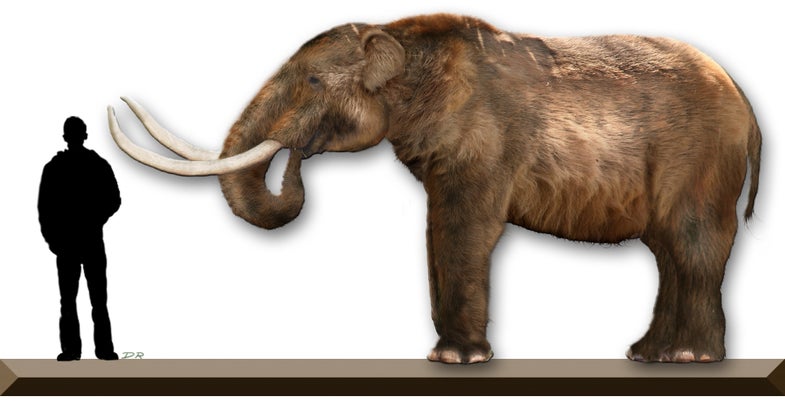 A new research letter published today in the journal Nature makes a startling claim that, if correct, will rewrite everything we know about how North America was populated.

But in the the words of its own author, Steven Holen, the evidence he and his colleagues discovered “went against everything I’ve ever taught in my career about early humans in North America.”

So clearly it’s reasonable to be skeptical. That’s why we’re breaking down the evidence in this special edition of CSI: Mastodon.

What is the paper actually suggesting?

There’s a deposit in San Diego that’s not particularly exciting at first glance. It has the bones of a mastodon and some other ancient animals, along with assorted rocks, silt, and 130,000 years of hidden history. While we’ve known mastodons (along with dire wolves, giant sloths, and other extinct animals found in this same pit) were living in California at that time, the new research suggests hominins were there, too.

What’s really so crazy about that?

Most archaeologists and anthropologists theorize the first humans spread out of the “old world” of Siberia and into the new world (the Americas) less than 25,000 years ago via the Beringia land bridge. So this paper is suggesting that the majority of experts may be off—by about 100,000 years. That’s kind of a lot.

But Holen says despite his initial disbelief, “the evidence was so clear cut and in your face, you have to accept the evidence and move on. You have to publish this no matter how controversial it is.” Everything he’s seen has led him to believe a distant ancestor of modern humans, with the ability to make tools, was at this site in California in the Pleistocene.

In short, the researchers think the bones of a mastodon were broken not by time or some random act, but by a human-like ancestor, intent on hacking away at the giant’s body. The evidence the researchers marshal to support this claim takes several forms, divided roughly between bones and stones.

First, there’s the way the bones were broken. They seem to have suffered spiral fractures, which suggests to the researchers they were broken while fresh, not from weathering or as the result of breakages over time.

The types of bones that were broken also tell an interesting story. It’s the big bones, the bones that give the mastodon its trademark size, that took the beating. The little and most fragile bones were in great condition. This suggests to the authors that instead of something like a stampede, which would have broken small bones and likely left the larger bones intact, a hominin came along and purposefully hammered at the large bones until they were left in the pieces we see today.

Pardon my pun, but we’ve got to hammer this one home: the fact that stones found on site appear to have been used as hammers is the key on which this whole thing turns.

Some of the rocks studied show an “impact notch,” where it appears the stone has been flaked off, likely with another stone, to create a hammer or anvil. This likely indicates some kind of sophisticated crafting on the part of a hominin, according to the researchers.

“I’ve seen hammers,” says co-author Richard Fullagar and, he adds, he has no doubt that’s what he found on site. Fullagar is an expert in so-called “use-wear analysis,” which basically means figuring out how something was used based on the way it’s broken or bent. Here, he says, his analysis shows that the rocks were wielded with incredible force and at angle that suggests the hammerer’s goal (should that person even exist) was to break apart the large bones.

Are there other possible explanations for what the researchers found?

Sorry to be a buzzkill, but archaeologist Cesar Mendez of Chile’s Center for Research in Patagonian Ecosystems says “this site is not… definitive proof [of] recognizable anthropogenic tools.”

Even if the lithics (a fancy word for rocks) are really from this site and this time period, there’s likely to be some disagreement about what they really show, Mendez says. It’s possible that further analysis will suggest the marks on the stones aren’t from hammering, but the result of natural breakage or some other process completely devoid of hominins. “A lot of damage in stones is produced through natural processes, and alternative scenarios need to be posited before concluding such material is of cultural origin,” he says.

Additionally, though the San Diego researchers think that their site is rather pristine and altogether free of intervention or mucking around, others disagree. The silt these bones were stored in, the authors say, experiences a slow and steady of flow of water but is protected from flooding. They take that to mean the rocks were left near the mastodon remains the way they were found, as opposed to being pushed there by strong waters after the fact. But that doesn’t mean some other act couldn’t have brought these artifacts together. Ultimately, “the authors have not demonstrated that they have an in situ archaeological association,” says archaeologist Luis Alberto Borrero of the University of Buenos Aires. Until it’s shown that the rocks and bones have existed together since the Pleistocene, skepticism will remain that the rocks found their way there more recently.

Should I reconsider everything I’ve ever held to be true?

Yes! Always. That’s the fun of science. You don’t get to be too precious about your preconceived notions. But this paper is just the start of what will be a long and exciting conversation about the way North America was populated. It really can’t be taken as canon—yet.

The researchers remain hopeful, however, that this study will prompt other archaeologists, paleontologists, and friends to reevaluate the Pleistocene-era sites they’ve excavated and keep an open mind to potential human involvement. Some of the study’s authors have already done this, saying they too might have dismissed small but important rock marks, bone breaks, or other bits of evidence screaming out “Hominins were here!”

If this whole thing is correct, I am to believe North Americans are the descendants of these early hominins?

If the hominins were even really there at all, their lineage has likely gone extinct since, Holen says.

And remember that while the researchers say they’re as confident as can be in the results of their study, Holen himself says it was “very hard to get my head around this.” So don’t feel bad if you’re reeling, too. And remember: the harder it is to believe the result of a study, the more concrete the evidence needs to be. If you’re trying to prove that human relatives populated a continent 130,000 years earlier than previously believed, signs of ancient butchering might just be too subjective to make the cut.