Researchers Restored A Colony Of Microbes In The Gut 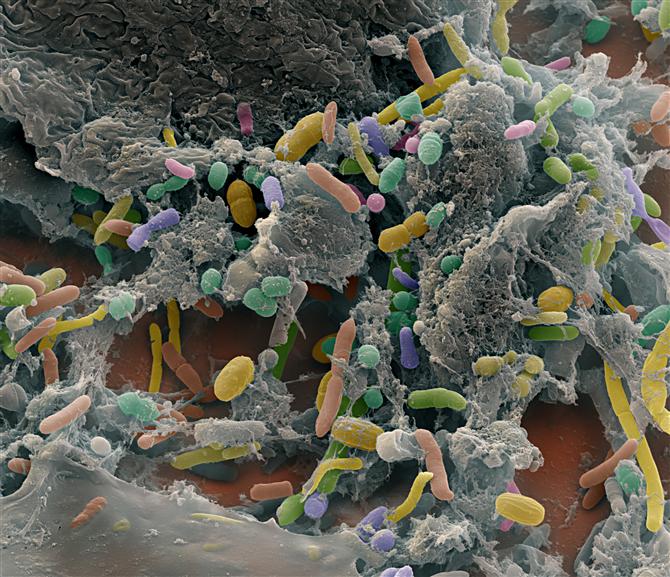 Last month, Popular Science discussed the state of gut microbiome research and the often overgeneralized claims of many probiotics. As we concluded, the field is still in its infancy and one of the main challenges to creating effective prescription probiotics is that it’s extremely difficult to culture a lasting population of specific bacteria in the gut. But in a paper out last week in the journal Cell Host and Microbe, researchers at the University of Alberta showed that they were able to culture a strain of bacteria in the gut for at least six months. This success, while small, may help to bring us one step closer to creating effective prescription probiotics.

The gut microbiome, like any ecosystem, is a rich, fluid, and interdependent web that responsively adapts to best exploit the resources provided: your food. But it’s also a really competitive environment, with every organism filling a niche in the web. Because of bacterial colonies’ diversity and rapid growth, the makeup of this web constantly shifts in adaptation to our consumption patterns. This is why you find a wide degree of divergence in the gut flora of people from different cultures.

As far as where probiotics stand now, it is possible to have at any given time, a population of certain bacteria if you keep regularly and relentlessly reseeding them (by taking probiotics daily, for example). However, as soon as you stop, that population begins getting overtaken by the better-adapted native flora.

So as beneficial as reseeding a generally disrupted microbiome is, until recently, research on the feasibility of targeting a particular open niche in your normal microbiome, and culturing a stable population of specific bacteria that could fill that gap in your ecology, has been sparse.

Jens Walter, a microbiologist at the University of Alberta, and lead author of the study wanted to see how long he could successfully cultivate a strain of bacteria in the gut. Walter decided to test a strain of bacteria called Bifidobacterium longum, a bacteria found in breast milk. According to Walter, it is one of the first species to seed a breast-fed infant’s microbiome, and is usually “a core member of the human microbiome.” But Walter wanted to see what would happen if he gave that strain to individuals whose gut microbiomes had a smaller colony of that species than most people do.

Over two weeks, Walter attempted to cultivate the bacterium into 22 participants by giving them daily doses of the strain in powder form. Six months later, the Bifidobacterium strain was still present in 30 percent of participants’ microbiomes.

However, that 30 percent success rate wasn’t seen across the board. Rather, the hits were concentrated in those with an open niche–an under-established population of Bifidobacterium, or similar species, already in their gut. According to Walter, this reinforces the importance of targeting an open niche, and demonstrates the feasibility of ameliorating specific, run-of-the-mill deficiencies with tailored probiotics.

Because the study was small, Walter says more follow-up research is needed. But perhaps the most important aspect of the University of Alberta’s study is that it signifies an exciting research trend. Gut microbiome researchers, on the whole, are driving research closer to creating probiotics tailored to take advantage of specific opportunities presented by our gut–smart probiotics that could one day see real, lasting improvement in our health.