Scientists are spelunking for cave gunk to fight superbugs

Deep in caverns around the world, bacteria are laboring to make antibiotics we can discover and use for ourselves. 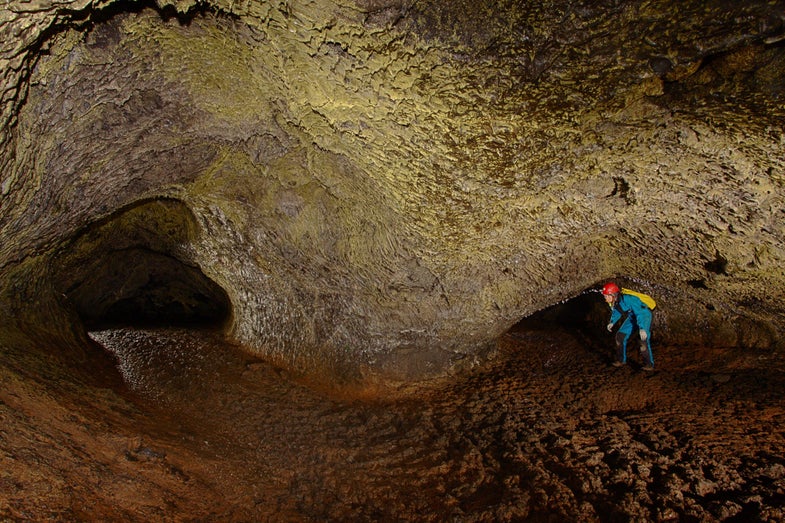 Caves are dark, dank, isolated, and home to very few plants or animals. At first glance they might seem devoid of life. But caves are full of microscopic creatures, bacteria and fungi at home in the gloom. These microbes, scientists are discovering, may be an untapped reservoir of new medicines to fight antibiotic-resistant germs.

That’s because most of the antibiotics we rely on actually come from bacteria and fungi; penicillin itself was derived from the Penicillium mold. In nature, microbes make these deadly chemicals to wage war on their neighbors (they may also use low doses of antibiotics to signal each other). We’ve taken these chemicals for our own use, and have developed hundreds of different antibiotics. But now, as more and more germs become resistant to our drugs, we are in desperate need of new ones.

By this point we’ve already found most of the obvious candidates dwelling in the soil around us. Yet an estimated 99 percent of all microbe species still await discovery, and the hunt for bacteria and fungi that could give us new antibiotics is far from over. Some scientists are scouring the dirt for microbes we missed before because we didn’t know how to make them grow in the lab. Others are striking out into new territory, and exploring extreme habitats where humans rarely venture.

The dark recesses of caves may be difficult and even dangerous for humans to explore, but they are also a rich source of new microbes. Microbiologists are returning from their depths with promising new bacteria—and a few old friends that may have been serving us in folk remedies since the sixteenth century.

Life in the dark

Caves are not an easy place to make a living. The constant darkness means plants cannot grow, and there’s very little to eat. The few nutrients found in caves have to be imported from the outside world by water or animal visitors that leave dung, eggs, or carcasses behind.

Scientists have described this situation as “starving in the dark.” But microbes survive—and even thrive—all the same. “There’s a lot of caves where we don’t find higher life, but we always find microbes,” says Kathleen Lavoie, a microbiologist at the State University of New York College at Plattsburgh.

At first, scientists assumed that these microbes would be the same as those found on the surface, persisting after being washed in from above. “For many years people didn’t think there was anything unique about cave microbes,” Lavoie says. However, when she and her colleagues visited seven caves in Lava Beds National Monument in California, they saw that only about 11 percent the bacteria they sampled were the same types found on the surface. Another team of scientists reported that 16 percent of the bacteria they found within Kartchner Cavern in Arizona overlapped with those up above.

It turns out that the microbes that have eked out a living in caves are a distinctive community. Far from the surface, the microbes have adapted to their shadowy home, and shaped it in turn; scientists now think that microbes even play a vital role in the genesis of stalactites and other bizarre-looking formations by altering the acidity and other conditions in a cave. And each cave habitat is different, depending on things like how it formed and the climate of the surrounding environment.

This means that there are many different communities of bacteria for us to investigate, and many opportunities to find new antibiotics. Naowarat (Ann) Cheeptham, a microbiologist at Thompson Rivers University in Kamloops, British Columbia, has already identified some promising contenders in several Canadian and Portuguese caves. Many belong to a diverse group of bacteria called actinomycetes whose other, surface-dwelling members are responsible for most of the antibiotics we use today.

“We see a great number of them…that kill multi-drug resistant [pathogens] in the lab,” Cheeptham says. Some may turn out to be bacteria we have already made antibiotics from in the past. So Cheeptham and her collaborators will have to investigate their bounty to weed out any repeat offenders.

She’s encouraged, however, by how many of the bacteria she has collected from underground seem to make antibiotics. Other locales are not so forthcoming. Years ago, she sifted through sediments from Tokyo Bay in search of a fungus-killing drug and found barely any candidates. Yet in one of the caves she has recently visited, about 20 percent of the microbes her team probed showed promise against drug-resistant bacteria. “It’s apples and oranges to compare but still, with the cave bacteria…it’s such an attractive resource to go find drug producers,” Cheeptham says.

In fact, it’s possible that cave microbes could be particularly well equipped to make antibiotics. If there’s scant food to go around, the competition among neighbors could be fierce. “The idea is that if conditions are harsh they need more advantages to outcompete other microbes,” Lavoie says.

Hundreds of years ago, people ventured into caves to collect a thick, whitish paste that was rumored to cure all kinds of ills. Called moonmilk, this mineral deposit was apparently slathered on wounds and used as a remedy for ulcers, diarrhea, broken bones and more.

Moonmilk was also put to some pretty weird uses (including “to bewitch loved ones”), and it’s extremely unlikely that it was effective across the board. However, it turns out that moonmilk really might have some curative properties. This gunk, which has a similar consistency to toothpaste, is teeming with bacteria. Many of these bacteria are actinomycetes, the group that has yielded so many of our antibiotics in the past.

“We decided, okay, let’s see if there is some rationale associated with this ancient traditional medicine—if there is scientific support that indeed the moonmilk is composed of antibiotic producers,” says Sébastien Rigali, a molecular microbiologist at the University of Liège in Belgium. He and his colleagues have been scraping moonmilk from European caves. Many of the bacteria they unearthed in moonmilk do seem to make antimicrobial chemicals that thwart other, drug-resistant bacteria and fungi.

Moonmilk can be dry and claylike, moist and creamy, or even liquid. “You [can] have rivers of moonmilk,” Rigali says. Depending on the water content and what nutrients are on hand, the population of microbes the colonize moonmilk can differ greatly. That means different types of moonmilk may also be laced with different antibiotics.

However, it’s going to be a long time before antibiotics derived from moonmilk—or any other cave locale—hit the market. That’s partly because coaxing cave bacteria to survive and pump out chemicals in the lab, away from the unique surroundings they have become accustomed to, is no easy feat. And when colonies do grow, their progress is sluggish. While surface-dwelling E. coli can double its population in about 20 minutes, cave bacteria may take weeks or months, Cheeptham says. And just because a chemical kills superbugs in a petri dish doesn’t mean that it will be effective in human bodies. It might even be outright toxic.

“You start out with 10,000 candidate chemicals, and 12 years and a billion dollars later you might have one,” Lavoie says. “But you’ve got to have a place to start, so the more you find the better off you are.”

If caves are not an easy place for microbes to get by, human explorers aren’t any better equipped. The researchers who descend into caves in search of new antibiotics endure plenty of trials before they reach their quarry.

Caves may be remote, hidden at the end of a difficult trek. Several of the caves Cheeptham investigates are deep in grizzly bear country, so the scientists have to be carried in by helicopter. While some caves are roomy, plenty of others are full of tight squeezes and difficult to navigate. Sometimes there are ponds to cross, which can be vast. On one occasion, Cheeptham sent a diver to scout a watery cave and he reported that, if drained, the pond he’d paddled through might be three times the size of BC Place, a stadium in Vancouver that can seat more than 50,000 people. There are caves that can only be explored in winter, when some of the water freezes. And then there is the pitch-blackness, punctuated only by the glow of headlamps. “Every time I go down there I have to basically shut off my brain,” Cheeptham says. “I’ve never seen any horror movies related to caves…if I watch those I might not be able to go.”

And on top of all of this, cave-bound scientists must be careful not to contaminate the delicate and pristine ecosystem with the bacteria on their own bodies while climbing or chiseling fresh samples from the cave walls. Clothes, bare skin, and crumbs of food must all be kept in check.

For this reason caves are carefully protected. Just putting in cement walkways, railings, and lamps for tourists alters the bacterial and fungal population. Photosynthetic bacteria have been found in the vicinity of artificial lamps in caverns that would normally be too dim to host them.

That’s why researchers try to sample caves where tourists do not normally tread. The indigenous microbes here may have been secluded for eons. But if this remote territory is intimidating, it also makes searching for new medicines exhilarating. “What’s really exciting is…to realize that it’s a completely unexplored environment, and to be the first one to collect samples of bacteria that have been there for millions of years,” Rigali says. “What we have isolated so far is maybe one millionth of what is really living there.”

The looming threat of antibiotic resistance has made their search all the more urgent. By 2050, drug-resistant infections may kill more people than cancer. That’s why we have to start searching for new medicines now, in every corner of nature—from fields, seas, and mountains to deep within caves. Among these legions of uncharted microbes are a few that will join the arsenal we’ll need to beat back the coming onslaught of superbugs.