Did Iapetus’s Mountains Fall From Space?

Where peaks come from 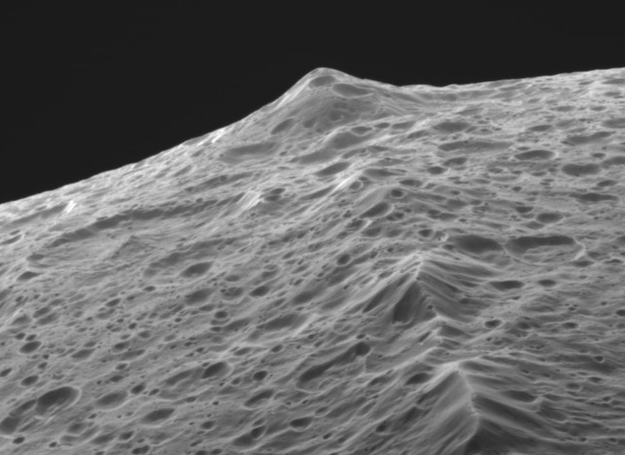 If you could hike to the equator of Saturn’s moon Iapetus, you would find a strange sight: a sudden mountain range jutting out of the ground, more than 12 miles high. Images from the Cassini spacecraft show that the ridge is a narrow 12 miles in width, and extends for more than 800 miles along the middle of the moon. But where did this narrow ridge come from? Iapetus appears to lack the signs of volcanism or geologic activity that seem likely to create such peaks.

Scientists have suggested that the mountain range did not come from forces within Iapetus–they rather fell from the sky. In a new study, published online in arXiv (but yet to be peer-reviewed), researchers created 3D images of the peaks, working with Cassini data. They found that most of the triangular-shaped peaks were near their “angle of repose,” the fixed angle a material reaches as it erodes and falls toward the ground. This idea is suggestive of an “exogenic” origin (meaning, from outside the moon). “The evidence of slope angles close to the angle of repose make the case for an exogenic origin more plausible,” they wrote. Presumably the peaks would have a different shape, or a wider variety of shapes, if they were created by forces within Iapetus.

The working hypothesis is that the material that fell out of the sky, so to speak, came from an impact with some large planetary body, like the collision that likely created our moon. This material then formed a ring around Iapteus that proved to be unstable, and then fell toward it, creating the ridge we see along its equator. A collision would also help explain why Iapetus has a lopsided orbit, and may help explain why one side of it always faces away from Saturn.

In case you’re wondering how peaks on Iapetus compare to those on Earth or elsewhere in our planetary neighborhood, here’s a helpful guide to the mountains of our solar system.