The Army is preparing its first laser weapons for battle

Two lasers faced off in an Oklahoma-style duel this summer. 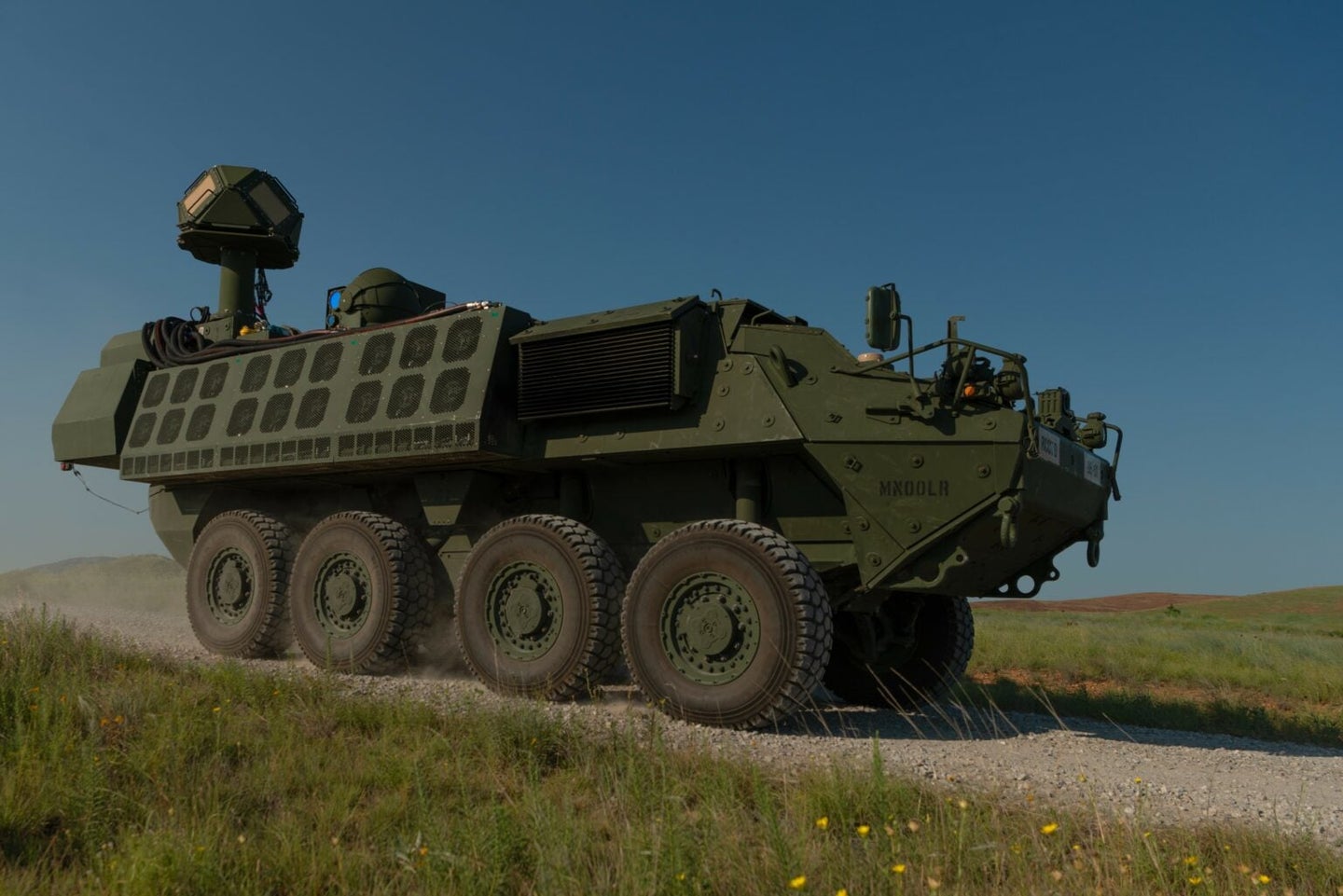 Slowly but surely, the Army is inching towards fielding its first true combat-capable, high-powered laser weapon mounted on a Stryker infantry carrier vehicle.

The shoot-off saw the two 50-kilowatt laser weapons—developed in a competition between defense contractors Northrop Grumman and Raytheon—participate in “a series of vignettes designed to emulate realistic threats and combat scenarios,” according to the service.

Those “vignettes” included simulated UAS and rocket, artillery, and mortar (RAM) targets for the systems to engage.

The laser-equipped Strykers “faced a number of realistic scenarios designed to establish, for the first time in the Army, the desired characteristics for future DE M-SHORAD systems,” the service said in a statement.

While laser weapons, long a dream of military planners, have only recently become feasible as a real-life combat system, it’s unclear whether technological progress will allow the Army to keep its ambitious timetable for deploying its laser Strykers downrange. But as far as Army officials are concerned, the service’s laser Stryker prototypes are all but ready for the next big war.

“This is the first combat application of lasers for a maneuver element in the Army,” said Army hypersonics and directed energy chief Ltg. L. Neil Thurgood in a statement. “The technology we have today is ready. This is a gateway to the future.”

DE M-SHORAD program manager Col. G. Scott McLeod added this in a statement: “We are building and delivering a brand new capability. This is not a modification or an upgrade. It took just 24 months for the combined government and industry team to design, integrate, and have it ready to perform in an operational environment.”

The Pentagon once envisioned deploying laser-equipped Strykers downrange in Iraq and Syria to counter the “flying IEDs” and explosive-laden drones of terror groups like ISIS, but applications to the European theater became a major focus for military planners after U.S. Army Europe identified a major short-range air defense (SHORAD) gap in the aftermath of Russia’s 2014 annexation of Crimea.

While soldiers with the 2nd Cavalry Regiment have been rocking 5kw laser systems aboard Stryker vehicles downrange in Europe for the last several years, the 50 kW trial represents a major increase in both power (and, by association, lethality) over previous iterations of the system, one that might finally prove capable of effectively intercepting incoming drones and ordnance.

According to the service, the Army Rapid Capabilities and Critical Technologies Office (RCCTO) plans on delivering a platoon of four laser-equipped Strykers to an actual combat unit by some time in fiscal year 2022.

Army officials had previously announced plans to stand up its first battalion of Stryker vehicles outfitted with high-powered laser weapons sometime this year with the goal of eventually standing up four battalions by 2021.

The DE-MSHORAD system isn’t the only laser weapon the Army is working on at the moment. As Task & Purpose previously reported, the service is also working to field a 300 kW Indirect Fires Protection Capability – High Energy Laser (IFPC-HEL) truck-mounted laser by 2024.

While the 50 kW Stryker will deploy primarily to drones and incoming ordnance out of the sky, the 300 kW version IFPC-HEL system could potentially channel enough power to counter incoming cruise missiles.