As PopSci cheers from the carrier deck 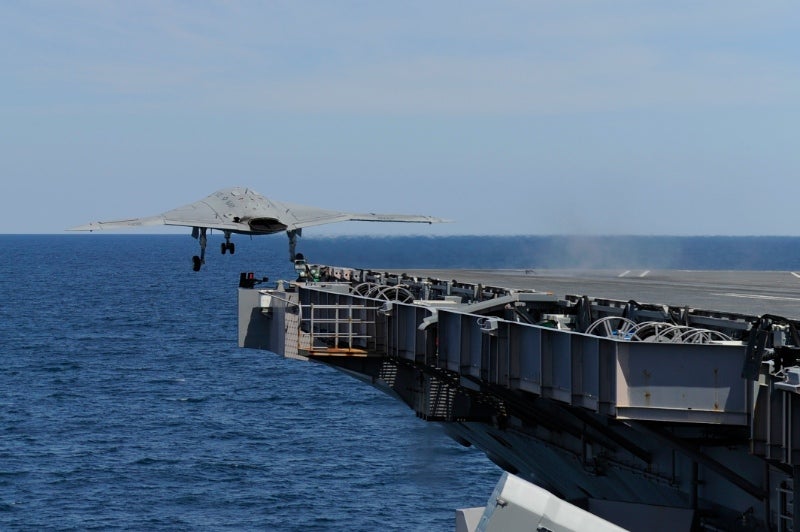 ABOARD THE USS GEORGE H.W. BUSH, ATLANTIC OCEAN–All that was left on the carrier deck was a cloud of white steam wafting over a flight crew that was visibly bursting with excitement even with faces concealed behind bulky protective headgear, noise suppressing headsets, and darkly tinted goggles. Much of this whooping, backslapping, and enthusiastic embracing took place square in the middle of the flight deck where the Navy’s experimental X-47B unmanned, autonomous combat jet had stood just moments before, Pratt and Whitney F100 jet engine screaming–before the robot gave its go-ahead salute–indicated by the a flash of its wingtip lights–and the catapult officer responded with the signal to launch, sending the X-47B catapulting off the carrier deck and into aviation history.

This morning at 11:18 a.m. eastern time, the X-47B became the first unmanned aircraft to ever complete a catapult launch from a carrier deck, an achievement just as momentous as the first launch of an aircraft from a naval vessel more than a century ago. And that’s simply where the list of the X-47B’s firsts begins.

Which explains the enthusiasm of the Navy/Northrop Grumman program crew that finally launched their Unmanned Combat Aerial System (UCAS) after years of development (though “combat” is part of the title, the two existing X-47Bs are only technology demonstrator meant to prove technological capability; Navy brass emphasize that it is not intended for active service, nor for weaponization). The team has been hard at work for the past year at Naval Air Station Patuxent River putting its X-47Bs through their paces on a terrestrial carrier simulator.

Noticeably absent from today’s demonstration, however, was an arrested landing aboard the carrier. After launching from the USS Bush the air vehicle designated “Salty Dog 502” for the purposes of this demonstration flight made two approaches to the carrier, one at roughly 1,000 feet altitude and another just 50 feet above the flight deck. Both were simulated “wave-offs,” where the Landing Signal Officer on deck or the aircraft decides that a landing is not safe and the aircraft aborts touchdown. Instead of eventually landing, Salty Dog 502 turned west and made a 65-minute flight back to Pax River in Maryland, where it landed on a terrestrial runway.

Navy brass on hand explained that while X-47B has already made several arrested carrier-style landings on the terrestrial simulator, it had not yet gathered enough of them to certify it for carrier operations and therefore could not, by Navy rule, return to the Bush. The X-47B’s first carrier landings are slated for later this summer (probably July or August), said UCAS deputy program manager Don Blottenberger. And the lack of an arrested landing to cap off the day didn’t seem to put a damper on the Navy UCAS team’s spirits as the X-47B made passes over the carrier deck before autonomously banking into a flight path toward its home base at Pax River.

“This was one small step for man,” Rear Adm. Mat Winter quipped shortly after the flight. “And one giant leap for unmanned kind.”