After a slew of successful of space telescope repair missions and launches in recent months, NASA is taking it easy... 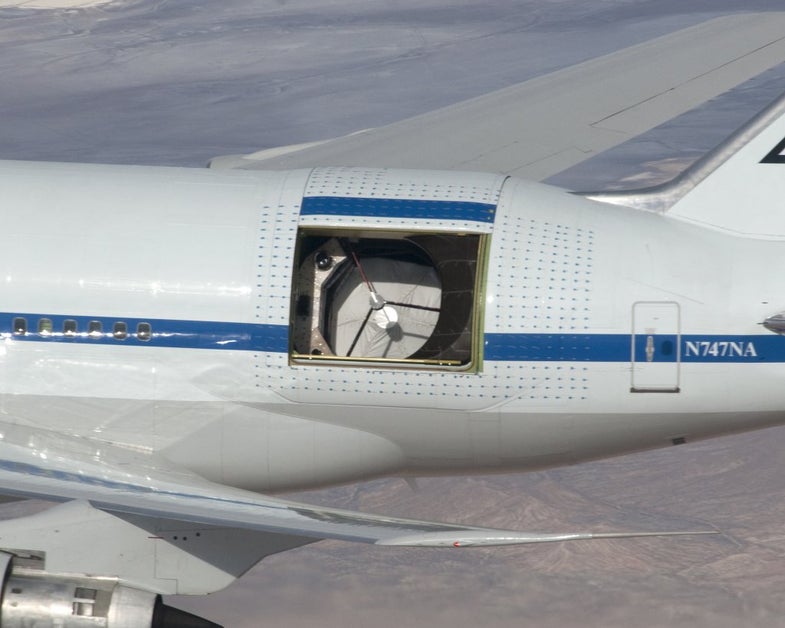 After a slew of successful of space telescope repair missions and launches in recent months, NASA is taking it easy these days. To use the newest powerful telescope, scientists will take a ride in a convertible. Sort of. The space agency’s new telescope is situated inside a 747 with a hole in its side.

The Stratospheric Observatory for Infrared Astronomy, or Sofia, has an open hatch so a telescope can watch the sky while the plane flies at 500 mph.

A cover would have been nice, but it was hard to find a strong, clear material that wouldn’t interfere with infrared light. There was one option — diamond.

Sofia flew for an hour and 19 minutes last month, reaching 250 mph at 15,000 feet. The telescope hatch was open for about two minutes, and NASA said there were no problems with aircraft handling, vibrations or acoustic resonance (like the hum you hear from an open car window driving at high speeds).

A bulge in the fuselage helps cut down on wind inside the cavity, and an active aperture keeps the light-gathering opening as small as it can possibly be. Double fluid shock mounts isolate the 17-ton telescope from turbulence, and the telescope’s secondary mirror can even oscillate to compensate for any shaking.

Diamond-less though it may be, Sofia is an astronomy geek’s dream. It will come home every morning, so its instruments can constantly be tweaked and updated. The plane, a modified 747 purchased from United Airlines, should last 20 years, so it will likely make discoveries with instruments that haven’t been imagined yet, Backman said.

“You could swap instruments out and put on a different one and investigate what you found with a new capability,” he said. “To update Hubble takes a space shuttle expedition and half a billion dollars.”

Sofia will study the compounds present in planet-forming disks around young stars, among other missions. First light, where the telescope will take its first pictures, is set for April.

The plane will fly in a long arc across the sky between 41,000 and 45,000 feet, above 99 percent of infrared-blocking atmospheric water vapor. The autopilot and telescope computers will communicate so astronomers can track a single object throughout the flight.

It’s tricky, but NASA has done it before. The Kuiper observatory, a modified cargo jet that flew from 1975 to 1995, showed airborne astronomy can be hugely successful.

“They discovered the atmosphere of Pluto and the rings around Uranus by going to the place on Earth where the shadows of those things fell during occultation, which is the central Indian Ocean, in the case of Uranus,” Backman said. “We can go anywhere in the world, for a southern hemisphere transient event, a supernova, or something else.”

NASA and its partner, the German Space Agency, plan to invite teachers on board some flights, Backman said. Teachers flew on Kuiper in the early 1990s, and Backman tracked some of them down. Not one teacher who flew on Kuiper has left the profession, and students who weren’t even born when the educators flew are still impressed with “the NASA teachers,” he said.

Teachers and astronomers will sit in the former passenger cabin, in the plane’s midsection. All in all, it should feel like a typical airline flight.

“We’re within all the normal operating parameters of the 747,” Backman said. “Except that we cut a hole in the side.”