Last month, scientists confirmed the widespread presence of small amounts of water on the moon. This landmark finding was followed... 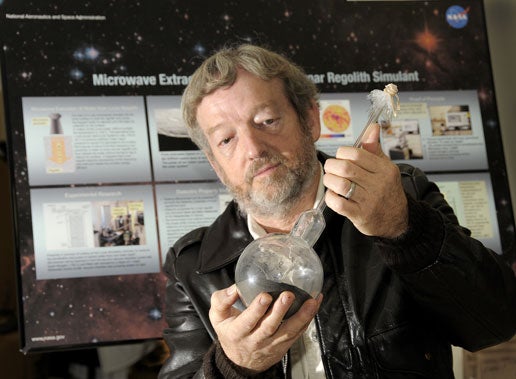 Last month, scientists confirmed the widespread presence of small amounts of water on the moon. This landmark finding was followed by NASA’s crashing its LCROSS probe into a crater in the lunar south pole, generating data which is currently being analyzed to determine the extent of water present around the impact site. Water extracted from the lunar soil could be used to sustain life and to generate rocket propellant. PopSci.com spoke to Ed Ethridge of NASA’s Marshall Space Flight Center, who has been studying how microwaves could be used to extract water from lunar soil.

The thermal conductivity of the moon’s soil is very low, which was something that the Apollo astronauts found. So we can’t heat the soil just by shining the sun’s rays on it, they would just get reflected. The advantage of microwaves is that they penetrate and heat the soil from the inside.

How do you then extract the water?

The microwaves don’t actually heat the ice, they heat the soil. But the water molecules get hot, and at around -60 Fahrenheit the water turns directly from ice to vapor. We could use a cold trap above the soil to turn the vapor back into liquid water and collect it.

And you tested this experimentally?

Yes, along with Bill Kaukler of the University of Alabama-Huntsville. We were trying to get funding for a vacuum chamber, which is really expensive, when Bill pointed out that we didn’t really need something that large. So we just put cryogenically cooled lunar soil simulant in a vacuum vessel, and put it in a regular microwave that we modified. And just as we expected the soil heated up, the water turned to vapor, and we were able to collect the water using a cold trap.

How have you followed up that research?

Well, to use more powerful microwaves in the megahertz or gigahertz range would require tens of thousands of dollars. The hardware is available, but it is very expensive. NASA’s In-Situ Research Utilization (ISRU) project has a minuscule budget, so it’s hard to build prototype hardware like that. So instead we’ve been using the Comsol multiphysics modeling tool, to model the many variables. Comsol can give us pretty reasonable calculations about how deep microwaves can penetrate at different wavelengths, and the rate at which the water will come out when we heat it up. Once we have more theoretical data, we can build a prototype to target a specific purpose. We’re also hoping to get actual lunar soil to test it on; right now we create lunar soil simulants that mimic the soil from different parts of the moon.

How do NASA’s recent findings impact your research?

Apart from the fact that there’s water on the moon, the data will help us find out where the water is. NASA’s lunar prospector showed us some subtle data aspects, like indicating that the top surface of the poles, anywhere from 4 to 40 inches of the soil, is water depleted. So we may need the microwaves to penetrate 40 inches into the soil. More data could help us find out exactly how deep the water is. Also, what’s its concentration? Some estimates indicate that water may form 1-2 percent of the soil. But others say it’s as high as 40 percent, in which case the water would fill up all the interstices of the soil. This would make mining it very tough, since the soil would be as hard as granite at the temperatures found on the moon. Microwaves would have many advantages: they’re simple, and we can heat the water in situ to extract it.