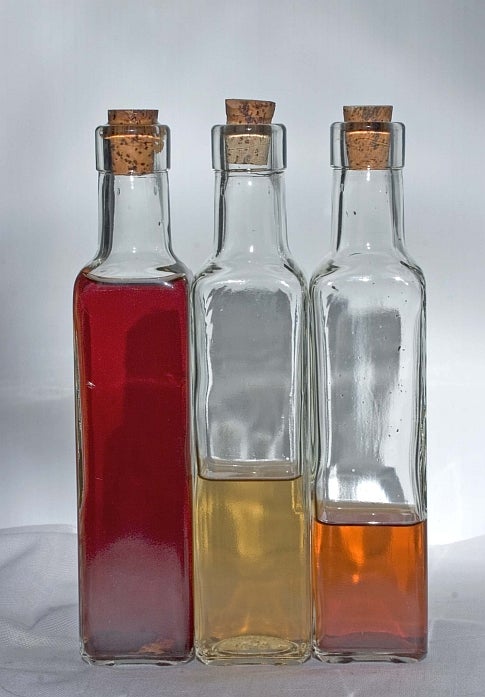 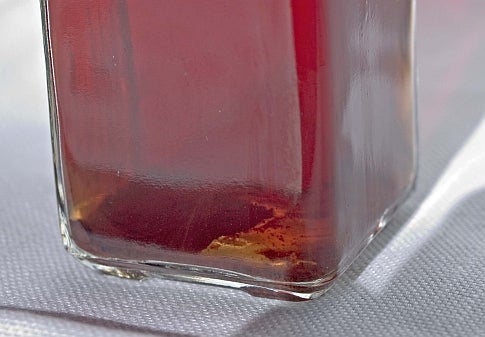 Vinegar is one of those ingredients that people don’t think of as often as they should. It is mostly just seen in salad dressings and pickles, which is a shame, because there is a whole world of flavor there just waiting to be tapped into. There are often times, especially during the holidays, when there is leftover wine after a festive dinner. Many of us will cork the bottle, with or without various safeguards to preserve the contents, and set it aside for the next day. Occasionally the bottles are forgotten, and when you finally open them again you find that the wine has evolved into something quite a bit different from what you were expecting. In these moments the change is often viewed with disappointment, as a delicate beverage has transformed into something sharper and edgier. Frankly, though, a smart cook will see the change as an opportunity. Good wine makes good vinegar and good vinegar is a stellar cooking ingredient.

Vinegar is a living ingredient created through the process of fermentation. The final product will contain elements of the original stock, which add a depth of flavor that differentiates a naturally fermented vinegar from a manufactured one. The term “vinegar” actually refers to the two-step process of fermentation from a carbohydrate to an alcohol to an acetic acid. Sugar is converted into alcohol, which is then fermented into vinegar. Not all acetic acids are vinegar, although all vinegars are made from acetic acid. When creating a fruit-based vinegar, wild yeasts are added to convert the sugars into alcohol. Starch-based vinegars add an extra step, wherein the starch is converted into sugar first, a triple fermentation process. “Alegars” are made from sour beer. Strongly flavored beers that have expired and are no longer fit for consumption as a beverage can make wonderfully flavorful and complex alegars.

Vinegar stocks are made using a base material that is fermented with yeast to create alcohol. Brewer’s yeast is used for cereals, grains, and molasses. Wine yeasts are used for fruit juices and honey. A sugar concentration in the range of 10-18 percent is considered ideal for making vinegar stock. This is because concentrations of alcohol at 9-12 percent are considered optimal for vinegar production. Acetobacter aceti is the bacteria used to create vinegar from alcohol. It is widely found in nature and requires oxygen to function. The bacteria are added to the vinegar stocks to begin the second fermentation process. Vinegar can be made from stock with alcohol concentrations as low as 5 percent, although these conditions can result in over-oxidation, while at higher concentrations, over 15 percent alcohol, acetobacters are inhibited by the amount of alcohol present and can even be killed off by it. If you’re using leftover wine, the alcohol levels range from 10 percent to 15 percent. Not to worry, if you don’t want to mess about with testing kits and you’re working with some leftover wine at the high end of the scale, say a California cabernet clocking in at 15 percent or more, just add a splash of water and let it ferment. It may take longer than something in the optimal range, but it will become vinegar eventually and you will be rewarded for your patience by the flavor of the finished vinegar. .

Acetobacters tend to be very temperature-sensitive. They are happiest between 59 and 94°F, with an optimum range of 80 to 85°F for acetification, and they die off at temperatures over 140°F. A clean, sterilized container for storing your vinegar during the fermentation process is a must. Small oak barrels can be purchased online, although we’ve found that large glass cookie jars with loose-fitting lids are an economical alternative. Acetobacters need oxygen to function, so airtight containers will not work for the fermentation period. Pure, soft water should be used for any dilution of the vinegar stock. The chlorine and fluoride found in municipal water can have an adverse effect on the fermentation process, so filtering your water is recommended. Once the fermentation process has begun, the vinegar stock should be left alone in a dark spot because acetobacters are sensitive to UV light for at least two to three weeks. The vinegar-in-progress should not be stirred or agitated during the fermentation period.

When making homemade vinegars, a vinegar “mother” or mat will often appear in the container of liquid during the fermentation process. This development is a good, though not a necessary, occurrence, because the mother’s appearance indicates a healthy environment for the vinegar’s development. The vinegar mother can take on a variety of forms, ranging from transparent to dark in color, and delicate and leaf-like in appearance to a solid mass floating at the top of the container. It is usually comprised of cellulose and complex sugars. Once the vinegar is completed, the mat should be removed and either used to create another vinegar or simply discarded from your base. If the mother is left in the container for too long it can begin to rot and adversely affect the finished vinegar.

After a few weeks of fermentation, it is time to test your vinegar. You will want to check the sugar, alcohol, acetic acid levels, and, of course, the flavor of your product. For a home brew you may simply wish to taste your vinegar and proceed accordingly; for a more scientific approach, test kits can be purchased from most home brewing or winemaking supply stores. You can use a titration kit to determine whether or not the acetic fermentation is complete. Alternatively you may simply judge by looking for a complete absence of alcohol in the nose and on the palate when tasting the vinegar. Once the acetic fermentation is complete the vinegar should be strained and transferred to airtight containers to reduce the risk of spoilage. Once the alcohol disappears, in the presence of oxygen the acetobacters will continue to break down the vinegar into carbon dioxide and water, reducing the acid levels and leaving the vinegar open to the development of various undesirable microorganisms. Straining the vinegar and transferring it to an airtight container will safeguard it from deterioration.

The final step in your vinegar-making process is aging. Fresh vinegar has a sharp, intense flavor. The aging process allows the esters to mature and the flavors to develop. If the vinegar is aged in wood, care should be taken to ensure that the barrel is topped off on a regular basis. Otherwise, simply storing it for several months in a sealed, airtight container will do. A minimum of six months is generally recommended for maximum benefit. Once the vinegar has been aged it should be racked or gently poured off the sediment and rebottled for use.

We’re sharing our formula for maple vinegar, so that you can try making it at home. 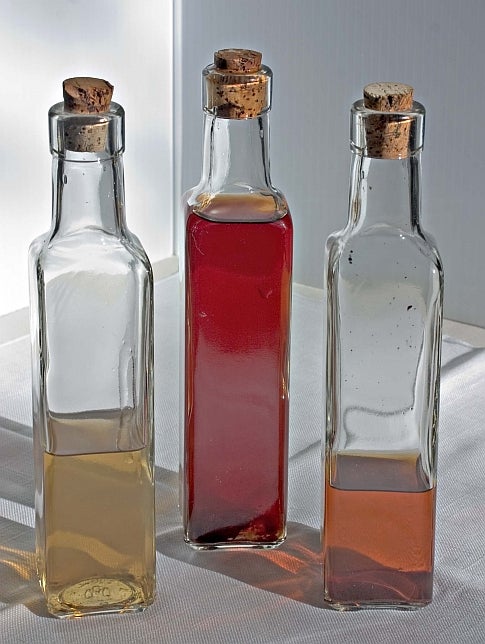 Maple vinegar is a favorite of ours for its rich, nuanced flavor. It’s not a product that can be found commercially so there is a real reward in trying this recipe at home. Once you have it in your pantry, you’ll easily find many different uses for it. It’s wonderful drizzled over roasted squash or balanced with a touch of cayenne and butter and brushed over a roasted chicken or simply spooned over a rich, runny piece of brie and accompanied by crisp apple slices. The possibilities are endless.

Combine all the ingredients in a glass vessel large enough to hold them, and cover the opening with cheesecloth to allow for ample air flow to reach the vinegar stock. Store the container in an undisturbed, dark spot for at least four weeks.

After four weeks, test the vinegar for development. Once the alcohol has been completely fermented out of the stock, strain the vinegar and store it in sealed bottles or mason jars. It can be used immediately and will improve with age.

If you don’t have a live wine vinegar to start the maple vinegar, you can buy unpasteurized cider vinegar, easily found in health food stores, to start your homemade vinegars.