Is Pot a Performance Enhancer?

The unfair science behind the M(J) Phelps suspension 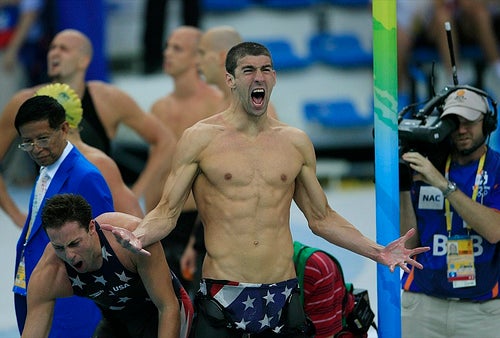 We didn’t want to write about it. Seriously, we didn’t. Sure, Michael Phelps has digital technology, the 24-hour news cycle and precision blown glass to blame for his plight but we’re better than that.* But when US Swimming went and suspended Phelps for two months for, ultimately, acting his age, we felt compelled to write something. The ‘Science’ part of Popular Science restricts us from condemning the insanity of the punishment (note, however, they did nothing following his 2003 DUI). So below we offer an introductory, though hardly comprehensive, summary of marijuana and its (non)role as a performance-enhancing drug.

We should start by noting that US Swimming has made it quite clear that the ban of Phelps has nothing do with performance enhancement (not much to enhance) and everything to do with serving as the morality police.

“This is not a situation where any anti-doping rule was violated, but we decided to send a strong message to Michael because he disappointed so many people, particularly the hundreds of thousands of USA Swimming member kids who look up to him as a role model and a hero,” the Colorado Springs-based federation said in a statement.

But, that doesn’t stop us from asking why the drug is banned in sports in the first place. It’s a question English sports minister Richard Caborn , Spanish Athletics Federation President Jose Maria Odriozola and New Zealand Sports Drug Agency executive director Graeme Steel all asked several years ago. Caborn said the World Anti-Doping Agency should not be “in the business of policing society.” WADA’s science director, Dr. Olivier Rabin, added his thoughts during the discussion, “Our mandate is to fight doping in sport. We don’t go beyond that mandate and this has nothing to do with the social aspects of these drugs.”

According to WADA, prohibition of a substance is based on three questions: does it enhance performance, is it dangerous for the athlete, and is it against the ‘spirit of sport’? If the answer is yes to two of the questions, the substance is banned. Conceding that cannabinoids are dangerous to the athlete (smoke inhalation can never be good), the debate rests on performance enhancement and spirit of sport questions. Given Rabin’s comments we figured data must exist showing the power of pot in sports.

An oddity worth noting is that marijuana is only sometimes banned. During competition, athletes testing positive will suffer punishment but testing positive out of competition (during training) is okay. The rationale for this depends on whom you talk to. Some argue the ability of cannabinoids to calm nerves, thus enhancing performance, only works directly before a competition (unless you found some especially sticky stuff). Others argue it’s an example of WADA waffling on how marijuana aligns with the ‘spirit of sport’.

“In the case of marijuana, it’s a call by WADA to balance the strong views by many that it shouldn’t be on the list at all and say that their primary concern is limiting it during competition,” said Steel. “What athletes do during their own personal time is not WADA’s business. That’s my own personal opinion and not speaking officially on behalf of WADA.”

Cannabinoids are not the only substance on the ‘sometimes prohibited’ list. Most stimulants with short-term effects, along with narcotics for pain relief, can be used freely outside of competition. These substances clearly can benefit performance; again, suggesting marijuana has similar capability.

So back to the core question. Can marijuana enhance performance? A cursory search of PubMed found a surprising lack of quality research on whether smoking a joint could help athletes win anything other than an eating contest. We doubt scientists would have a hard time recruiting volunteers so logic might suggest that most scientists just don’t buy for a second that inhaling Cheetos is a desirable side-effect for elite athletes. WADA provided several references for this piece that focused more generally on the pharmacology of marijuana but offered little data on actual physical performance.

Saugy, et al, published a literature review of the topic in the 2006 British Journal of Sports Medicine. Saugy first references US data suggesting that 16 percent of US adults aged 18-25 reported cannabis use in the past month (again, sample size should not be a problem for any future research). The paper refers to cannabis as an ‘ergolytic’ drug, which impairs performance, rather than a ‘ergogenic’ drug that would enhance it. A referenced study showed that 12 healthy adults cycled to exhaustion in less time after smoking 10 minutes earlier. Other studies have shown that THC (the ingredient that gets you high) increases heart rate and blood pressure while decreasing cardiac output and psychomotor activity.

A detailing of the pharmacological effects of cannabis published in the British Journal of Psychiatry by Ashton, does note that colors might seem brighter. While that might help a tennis player see the balls, these additional side effects are a little less desirable when returning a 120-mph serve.

“Spatial perception is distorted and time perception is impaired so that perceived time goes faster than clock time. Hallucinations may occur with high doses.”

Most theories on potential benefits from marijuana surround its ability to alleviate stress and relax. A study of French sport students showed that “good sleep” was one reason listed for marijuana usage and that participants in extreme sports—those where competition included elevated levels of physical dangerous—reported higher rates of usage.

A WADA spokesman added in an e-mail response that, “Research showed that cannabinoids can allow athletes to better focus and diminish stress.”

And according to Saugy, “it can have a euphoric effect, reducing anxiety and increasing the sociability of a player who may be particularly nervous before an important match.”

Steel has heard those arguments but notes that in his experience in New Zealand, it is simply not the case. More than 60 percent of the positive tests in his country are for marijuana and not once has a tribunal found that the drug was taken for performance enhancing capability.

Rabin had previously disputed that contention noting that a reduction “in the sense of fear or apprehension” can classify cannabinoids as performance enhancing in certain sports. He noted that athletes have testified to such after being caught.

But, if the issue truly was about some archer wanting to smoke a joint to help him hit the bull’s-eye, why not ban it in only that sport? WADA has precedence and existing protocol for such a move. Alcohol for examples is only banned in a handful of sports (motorcycling, powerboating, etc.). Steel doesn’t expect that change to occur.

“Yes, it would be an option, but there are some strong entrenched views that it has no place in and around sports so that view is unlikely to prevail,” said Steel. “Some strong lobbying groups think it shouldn’t be there whether it effects performance or not.”

Apparently suggestions otherwise would just be blowing the proverbial smoke.

*Though we can’t help but note how potent is the irony of a man with scientifically-inexplicably large lungs inhaling smoke from an oversized bong.