Man 3D-Prints Working Revolver With His Name On It 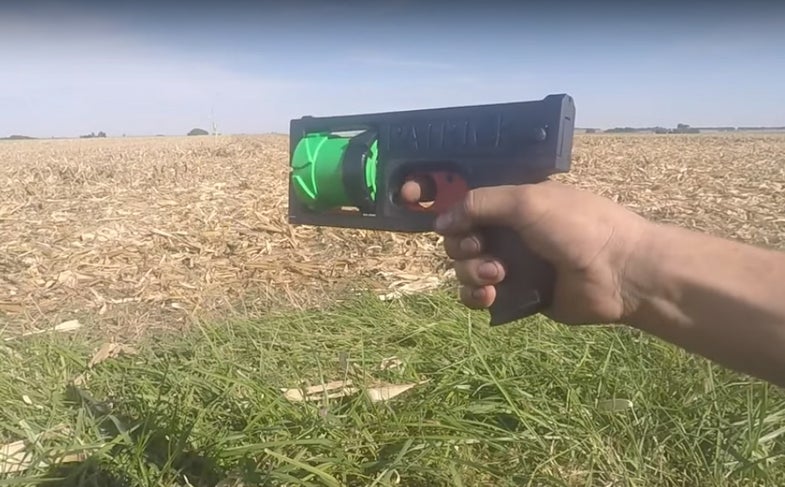 Cyberspace isn’t the Wild West, but if anything gets close, it’s 3D-printed guns. The weapons, made at home by people with both a desire for a firearm and access to a printing machine, are themselves untraceable, circumventing most gun regulations by being made at home. James R. Patrick’s 3D printed revolver is very much part of the same, a deadlier evolution of the same concept.

Dubbed the PM522 Washbear, the revolver fires .22LR bullets, common in small-game hunting rifles and some pistols. Every part of the gun is printed in sturdy ABS plastic, except three: elastic bands, a metal roofing nail that acts as a firing pin, and a nonfunctioning slab of metal that goes in the handle so the gun can show up on metal detectors, which is generally required by law. The gun has both 6 (reinforced nylon) and 8 shot (ABS plastic) cylinders. When pulled back, the trigger both advances the gun and cocks the firing pin into place, before it springs forward and fires the bullet. At a resting position, the firing pin sits between chambers, presumably preventing the gun from firing when dropped. Here’s what a model of the gun looks like when firing:

Patrick’s revolver is an improvement upon Defense Distributed’s original, single-shot Liberator pistol. In October 2014, a man in Japan was arrested for 3D printing a “ZigZag” revolver, and in tribute to the arrested gunprinter, others have improved on his design. The files needed to print a gun can cross borders easily, which means people who want to print or improve on Patrick’s design will likely be able to do so. In Japan, they could face criminal penalties for printing the gun. In Australia’s province of New South Wales, thanks to a law passed earlier this month, merely owning the files could land a person in prison for 14 years.

Watch Patrick explain, and fire, his weapon below: