The printer weighs 4,630 pounds (without its large metal storage box) and heats aluminum up to 1,562 degrees. 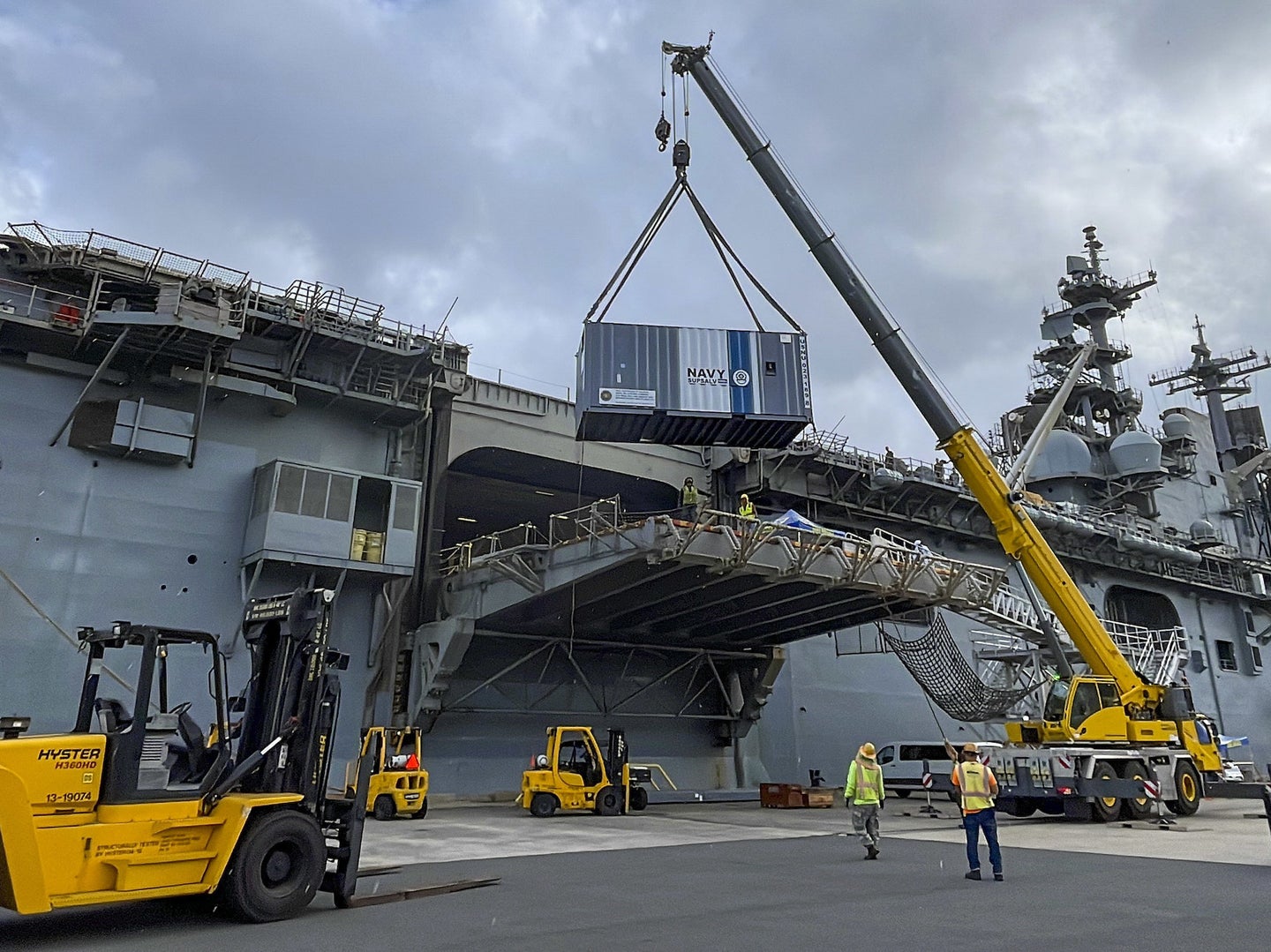 The printer arrives on the Essex on July 8, 2022. US Navy / Ace Rheaume
SHARE

Earlier this month, a Navy ship called the USS Essex received an enormous printer. The printer and the large gray box it is housed in—together weighing some 15,000 pounds—were hoisted onto the ship, via crane, in Pearl Harbor, Hawaii. The printer doesn’t print in ink. It prints using hot liquid metal, making it a small aluminum fabrication facility in a box.

The idea behind putting the device on the ship is for the Navy to have a way to fabricate metal parts it might need at sea. Here’s how it works.

The printer, called the ElemX, is made by Xerox. It measures 9 feet wide and 7 feet tall, and will remain in its roughly 20-foot-long conex storage box while deployed on the Essex. It weighs about 4,630 pounds alone, and needs a power supply of 480 volts.

The material it prints with is aluminum, and it consumes aluminum wire as the raw material.

“The wire gets fed into the heated print head. The print head gets to 850 Celsius [1,564 Fahrenheit], which essentially melts the wire, so you get this liquid pool of metal,” says Tali Rosman, the head of Elem Additive at Xerox. “And then we activate pulses on the print head, and eject [metal], drop by drop, to build the part.”

The pulses that expel the liquid metal are magnetic. The print head doesn’t move, but a plate beneath it does, allowing a custom part to take shape. “You can get the part in your hands in less than a minute from when the print finishes,” she adds. After it finishes printing, the creation and the plate it is attached to must be dunked in some water, a process that separates the two items.

The result, she says, is “a mini factory in a conex box.”

She notes that the printer is not simple enough for a sailor with no training to operate it. “We’re not there yet,” she says. The training program for operating the printer takes three days. In other words, it’s not as simple as loading a file for a wrench and hitting print.

A tale of two printers

The printer currently on the Essex has a sibling: The same model machine has been installed at the Naval Postgraduate School (NPS) in Monterey, California, since December, 2020. “The Navy and NPS are printing the same parts at sea and on land,” Rosman says. After the ship docks, they’ll compare and contrast the parts made in the different environments to see if they differ. They will “make sure being at sea didn’t cause any significant variations or changes.”

So what could go wrong with printing parts using hot liquid metal on a 844-foot long Wasp-class ship that’s floating in the ocean?

One variable on Rosman’s radar is vibrations from the ship, which might affect the printing process. The next concern is “the climate” the printer will experience while onboard, in terms of salty air or even saltwater—although the printer will remain protected within its large box and is inside the ship itself. “But in the interest of being fully transparent, since nobody’s done this before, we don’t know,” Rosman says. “There might be things that we haven’t thought about, that as this printer is now at sea, and printing parts, there might be things none of us had put on our risk checklist.”

[Related: This huge Xerox printer can create metal parts for the US Navy]

The type of objects that want to fabricate using this printer are pretty straightforward. The idea is to be able to create items that might come in handy at sea when a stop at a hardware store would be logistically inconvenient. “They want to make relatively simple parts that break on a ship often,” says Rosman.

Printers that can create three-dimensional objects can lead to “greater self-sufficiency for Navy ships,” notes Commander Arlo Abrahamson, a Naval spokesperson, via email. He says that the metal items that have been printed thus far on the Essex are “Common Valve Hand Wheels, Antenna Seal Band Brackets, Fire Hose Spanner Wrenches,” and more.

Abrahamson also notes that a previous polymer-based 3D printer on the Essex produced non-metal parts, and created some 735 items during a deployment between 2018 and 2019.

Take a look at a video showing how a metal item is made, below: