Just one day later than expected–and that’s pretty good for a rocket launch–Copenhagen Suborbitals’ “non-profit rocket” successfully launched from its... 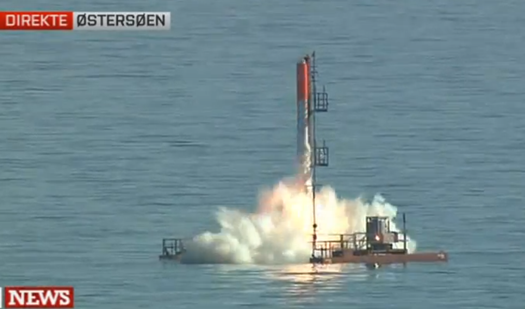 Just one day later than expected–and that’s pretty good for a rocket launch–Copenhagen Suborbitals’ “non-profit rocket” successfully launched from its catamaran launch platform in the Baltic Sea today, notching a major milestone for the organization that plans to eventually send an amateur-built manned rocket into suborbital space.

The flight did not come off perfectly smoothly–few first tests of a technology do–but the team is calling it a complete success. The launch gathered the the organization its first flight data on its HEAT 1-X rocket booster and the Tycho Brahe capsule that can carry a crew of one. The ascent reportedly came off a bit more sideways than the team anticipated, but using the data collected the team should be able, slowly but surely, to begin ironing out the wrinkles in the largest amateur-built space rocket that we know of.

The flight, lasting 21 seconds, hit supersonic speeds before cresting at just two miles up–about 60 miles shy of the accepted earth-space boundary–but that was by design. The parachutes then deployed upon descent but didn’t open appropriately, leading to a rougher landing than anticipated. Though there was some damage to the capsule, it was largely recovered and should provide more insight into the team’s design.

The eventual idea is to send space tourists into suborbital space atop the HEAT 1-X, where he or she will take in spectacular views of space and the Earth below through the Tycho Brahe’s polymer plexiglass dome. These manned flights are a ways off, but just getting the thing into the air is a huge step forward. Now the data crunching and design tweaking can begin in earnest.

In the video below, you can see two attempts. The first fails at the 1:53 mark when the rocket igniters fail. The do-over a few minutes later at 5:45 is decidedly more satisfying.