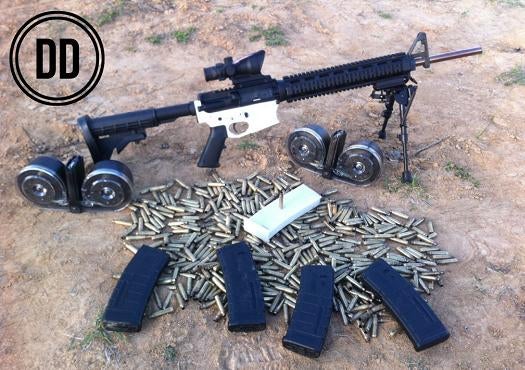 The agents provocateur at Defense Distributed welcomed Congress back from recess by releasing a video of a brand new 3-D printed AR-15 receiver being used to fire multiple 100-round magazines. The video, embedded below, features a gun being fired for almost the video’s entire 3-minute run time, with both a Fused Deposition Modeling and Stereolithography model (these are different 3-D printing techniques) of the 3-D printed receiver tested. The receiver could have been tested with any magazine, so picking these truly massive 100-round ones, three times the size of those regularly carried by soldiers, is a direct rebuke to Congress, which is currently debating a ban on high-capacity magazines, starting at 30 rounds and possibly going as low as the President’s desired limit of 10.

Defense Distributed first made a name for itself with the Wiki Weapon Project, which solicited plans for a working gun that could be made using a relatively cheap 3-D printer. Currently, Defense Distributed’s site offers two sets of schematics, both based on the same 3-D printed receiver: the first is a kit designed to convert an AR-15 semi-automatic rifle into a .22 caliber hangdgun, and the second uses the receiver in a normal AR-15 construction. In addition, nearly one hundred schematics for 3-D printable gun parts are available for download at DEFCAD, which is a Defense Distributed project and accessible from their main site.