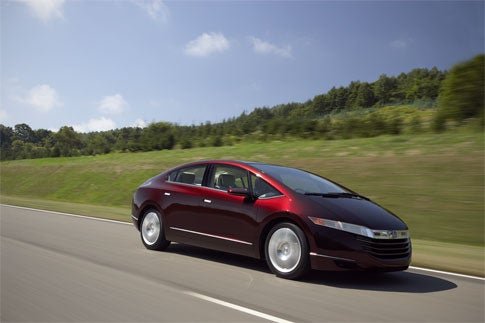 For a closer look at the Honda FCX, click ‘View Photo Gallery.’ And for a rare Q&A with Honda’s president and CEO, continue reading on the second page.

There’s something disconcerting about driving a high-speed oval for the first time, and it’s easy to identify: As you approach either of the steeply banked turns, you don’t slow down. Trust me when I tell you it’s easier to nod and say “Sure, I get it,” than it is to blast into those perfect semicircles at full speed. Especially when you’re only the second civilian in the world to drive the next-generation Honda FCX prototype, a one-of-a-kind, multimillion-dollar, zero-emission fuel-cell car that you always assumed was made of duct tape and posterboard gussied up with a nice paint job, as is so often the case for auto-show concepts. Surely the rules are different for this car.

“Dondon dondon osaete kudasai”.Huh? I mentally check and then recheck my Japanese. There’s no question: The clipboard-clutching engineer next to me just told me to floor it. So I floor it. And the car goes_fast_. Though Honda will not give official numbers for acceleration, my silent mental stopwatch puts the FCX’s 60 time at about seven seconds, on par with an Audi A4. And around the steep banks, the car is completely surefooted, with no shakes or scary suspension moments. It seems a lot closer to production-ready than its limited release date of 2008 (which refers to the year when, like, one guy in California gets to lease the car) would suggest.

The FCX’s driving traits are attributable to Honda´s new vertically oriented fuel cell. Instead of lying flat under the floor like all the other hydrogen vehicles out there, Honda’s new stack stands upright where a normal car’s transmission would go. The advantage of this is that the water created as a by-product of converting hydrogen to electricity doesn’t need to be aggressively pumped out of the fuel cell; gravity does much of the work, so there’s much less need for a power-sucking, efficiency-stealing pump to move the moisture. The orientation also makes for a much lower center of gravity than a typical fuel-cell car. Almost all of the ones before the FCX looked like mini SUVs: high off the ground for their size. This is because most of the area under their floors was taken up by their fuel cells and the massive cooling ducts meant to keep them from overheating. This design made the cars nail-biters anywhere north of 75mph.

At least, that’s how the currently available version of the FCX felt when I drove it for comparison. While I slowed it waaaay down before entering the curve, I pushed the low-slung prototype into the bank at more than 80 miles an hour. The high-off-the-ground ´05 FCX felt skittish even on the straightaway at its maximum speed of 140 kph (about 87 mph). The FCX prototype, which looks like a sleeker and more stylish Accord, is low to the ground, sporty, and well-behaved at 92 mph, my maximum speed in it.

“And how do you like the ball display?” the engineer asks, referring to the computer-rendered glowing green ball in the middle of the instrument panel. “What’s it do?” I ask.

“Under full acceleration, when you are using the maximum amount of hydrogen, it will turn red. Try it and see.” I watch the ball change color as I mash the pedal, and then quickly look up to see a banked corner approaching rapidly. Uh-oh. In this case, it’s best not to keep your eye on the ball.

“I don’t like it at all,” I say, forgetting for a minute the tact I should be using toward a man who has dedicated the last few years of his life to creating this car.

“Why not?” he asks, business-like but clearly concerned.

“I was so busy watching the ball change color that I almost put the car into the wall.”

“Naruhodo,” he says. Translation: “I see what you mean.”

On a recent trip to Honda´s R&D center in Utsunomia, Japan, PopSci got a rare opportunity to sit down and chat one on one with the company´s president and CEO, Takeo Fukui. We discussed motorcycle racing, the future of the automotive industry, and, of course, robots. Here´s what he had to say.

**You must be very excited for tomorrow´s race [the Grand Prix of Japan].

**Yes, I am. Motegi is our home track, so I am optimistic that Nicky [Nicky Hayden, Honda’s team driver] will win [he came in sixth].

**OK, down to business [we only had 10 minutes for the interview]. You started out at Honda working on the 1973 CVCC, the first car to meet the stringent oil-embargo-era EPA emissions standards, so you have unique insight into the challenges of a fuel crisis. The end of that crisis proved that the American consumer had a very short memory-as recently as two years ago, cars that barely exceeded 10 miles per gallon were flying off the lots. If this fuel crisis passes in a similar fashion, how long do you think it will take before America forgets again, and how will Honda, as a company supplying that market, respond?

**Yes, Americans love big cars, and they will want them whenever possible. Honda will, of course, give them what they want, but our cars will always be the most fuel-efficient in their respective classes. Over and above the availability of fuel, we have a serious problem with global warming that needs urgent attention, so Honda vehicles will always strive to reduce carbon dioxide emissions regardless of the price of fuel.

**How much of the company’s current focus on efficiency can you take credit for, and how much of it is due to Honda´s identity?

**The credit for this focus goes all the way back to Soichiro Honda, our company´s founder. He made his name famous with four-stroke motorcycle engines that were more efficient than any of the two-stroke competitors. Environmental sensitivity is historically and currently at the core of our corporate DNA. And actually, we started working on the CVCC before the 1970s oil crisis; it was just coincidental that we launched it when there was a real need for that car. You can even look at our new HondaJet. It´s 40 percent more efficient than any other plane in its class, and we started work on that project years in advance of this most recent fuel shortage.

**So does that mean that the next NSX, which you have said will have a V-10 engine, will be a green supercar?

** [Laughs] I don´t think there´s such a thing, but it will definitely be the most efficient car in its class.

** Honda aggressively pushes hydrogen as the fuel of the future, but there is a lot of criticism because hydrogen takes so much energy to generate and often uses fossil fuels to do so. Is hydrogen the ultimate solution to our automotive environmental problems, or is there something beyond that, a further step toward efficiency that Honda has in the works?

**It is important to understand that hydrogen is not a fuel but a means of transporting energy in a manner that does not create a toxic waste product. In the future, I envision an electric car that runs off hydrogen generated by solar panels. So don´t compare hydrogen to oil. Compare sunlight to oil, and there, I think, is an excellent solution.

**Yes, and in fact, there´s a very good panel over there that we just developed [points to a new thin-film solar panel].

**What percent of Honda´s R&D budget is spent on solar technology?

**I can´t be specific about that.

**Yes, I am proud to continue our corporate vision, but, as I said, that is Soichiro Honda´s legacy. If I might presume to wish to be remembered for something, it would be for making a positive difference in as many ways as possible, even beyond fuel-efficient vehicles. I think that is the duty of all good corporate citizens.

**In what ways other than vehicles is Honda improving people´s lives?

**One example is our robot, Asimo. I´d like to see one in every home, freeing up the parents to spend more time with their children, helping to educate children, and caring for the elderly.

**Thanks very much for taking the time to speak with us. 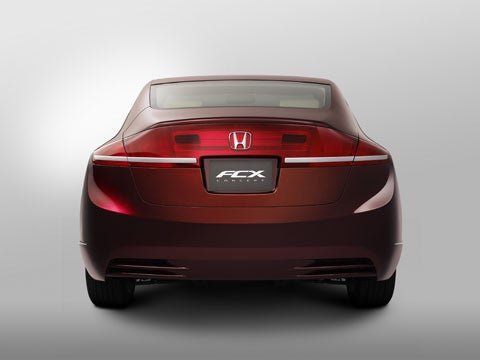 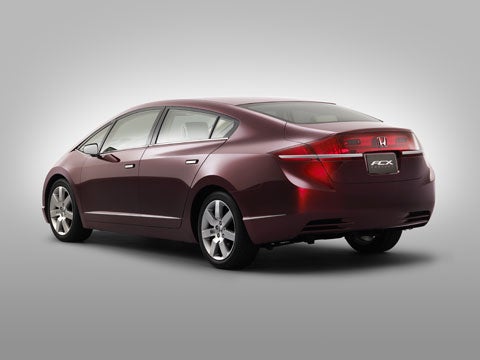 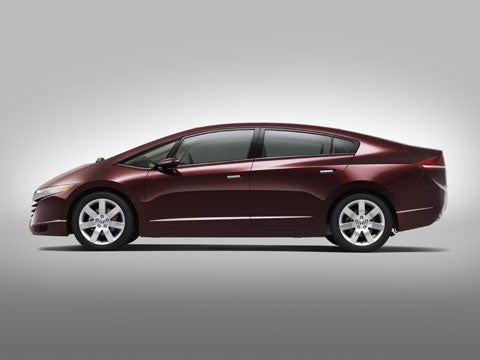 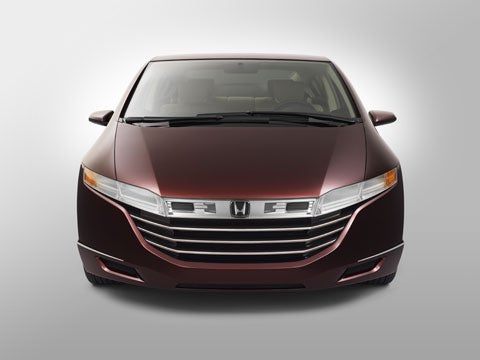 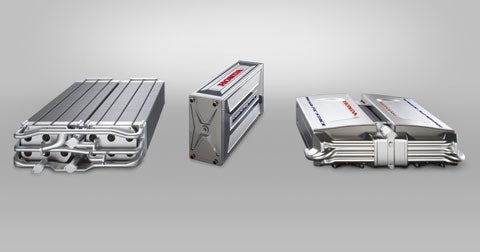 All three generations of Honda’s vehicle fuel cells-the one in the middle is what drives the FCX prototype. 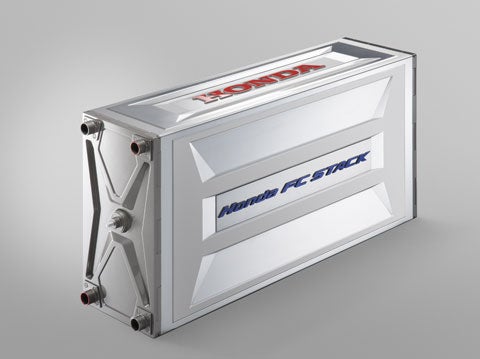 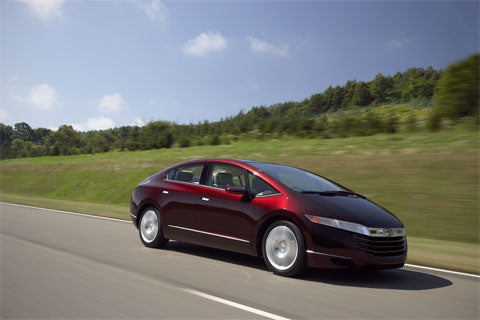 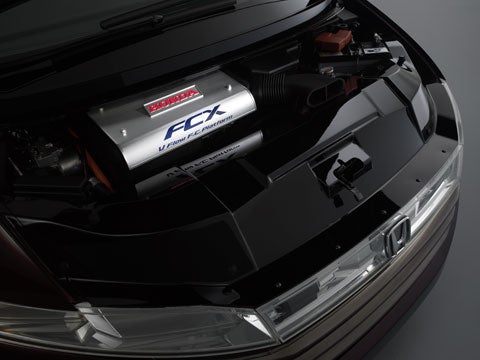 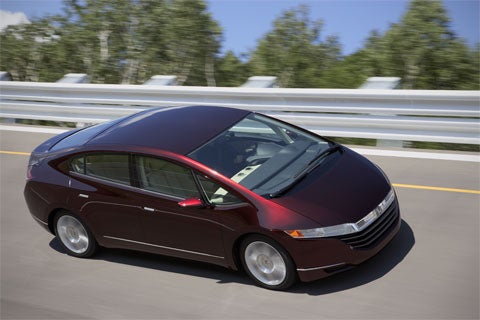 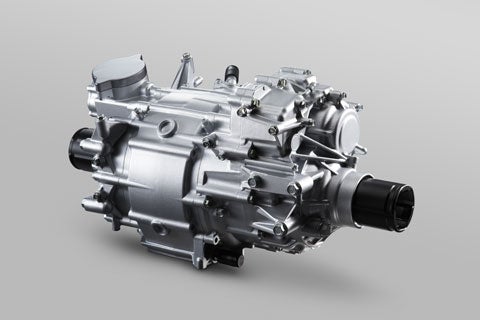 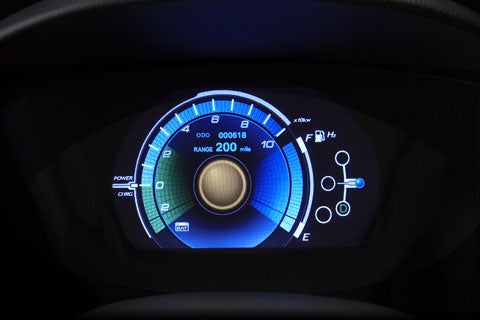 The central gauge, showing hydrogen usage and supply as well as RPM and range 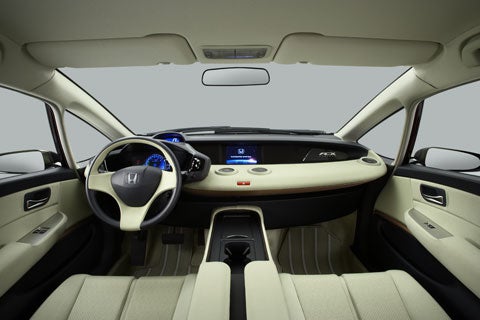