Why This Guy Implanted Headphones In His Ears

For DIY biohacker Rich Lee, earbud implants are about more than self-expression: they're also a matter of survival. 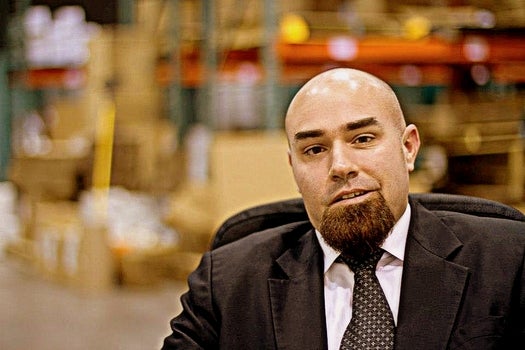 Rich Lee, a 34 year-old salesman from St. George, Utah, and a self-described Grinder, recently had sound-transmitting magnets implanted in his ears. Paired with a media player and cord, amplifier, battery pack, and a coil necklace–all concealed under a shirt–he can play music and more without anyone knowing he’s doing so. He has also used the implants with other devices to augment his own senses and abilities. “This new synesthesia of sorts is an exciting way to explore the world and develop new instincts about the way the world works around you,” he explains. Which sounds fun if, you know, you’re into that whole “slice open your tragi and stuff ’em with hunks of metal” sort of thing. But for Lee, it’s about more than just an unusually intimate form of self-expression: it’s also a matter of survival.

“I might be legally blind soon,” Lee tells H+ magazine. “I lost much of vision in my right eye overnight a few years back. I just woke up and couldn’t see well up close or far away.” Eventually he’ll lose his driver’s license, his ability to read, and, perhaps even his ability to hold down a job. With headphone implants, he could compensate for his loss of vision by learning to echolocate, he says–by interpreting the shape and dimensions of his surroundings based on how they react to emitted sound waves, much in the same way that a bat perceives its surroundings.

You don’t want to try this stuff at home. As Lee tells it, implanting unmodified neodymium magnets can be dangerous, leading to infection and, in extreme cases, even amputation. So Lee tracked down body modification artist Steve Haworth in Las Vegas to do the job. To make the magnets implant-safe, Haworth coated the magnets in a layer of gold and then encased them in “implant grade bio-proofing,” Lee says. Next, he made a small incision into each tragus (the fleshy protrusion in front of the ear opening), inserted the magnets, and stitched Lee back up. The procedure, he says, “hurt about as much as getting your ear pierced in the same spot,” requiring only some ice and ibuprofen. After about a week’s recovery, Lee was able to start using them. 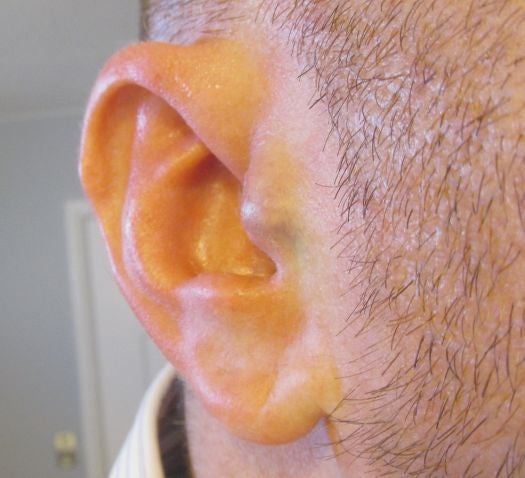 The magnet is hardly visible to an unsuspecting eye.

Sound, physically, is a sequence of waves or vibrations in the air, and our complex ears are able to react to a limited range of those vibrations. Various brain processes interpret the resulting changes in our ears, analyze them, and in the end, we perceive sound. Lee’s device (inspired by this tutorial), when paired with his implants (inspired by this thread), mimics the way we typically perceive sound.

First, a device of his choosing (a phone playing music, say) generates a varying current–the sound information–and transmits it out a standard 1/8″ jack into a cord. Then, that current passes through an amplifier (hence the battery pack) and continues, intensified, up to the coil necklace. Here’s where things get interesting. The coil necklace is made from copper magnet wiring. As the current departs the cord and passes through the wiring, in its fluctuating, wave-like form, it is traveling in one of two possible directions: up or down. (A simplified, illustrative example is a sine wave.) Traveling in one direction (i.e. up), it generates a magnetic field that opposes Lee’s implanted magnet’s field, while the other direction generates an aligning field. When the fields oppose each other, the implanted magnet pushes away from the coil, towards Lee’s eardrum. When they align, the implanted magnet pulls towards the coil, away from his eardrum. The coil acts to both intensify and direct the resulting magnetic field. Control the current that passes through the coil, and you are able to control the implanted magnet. 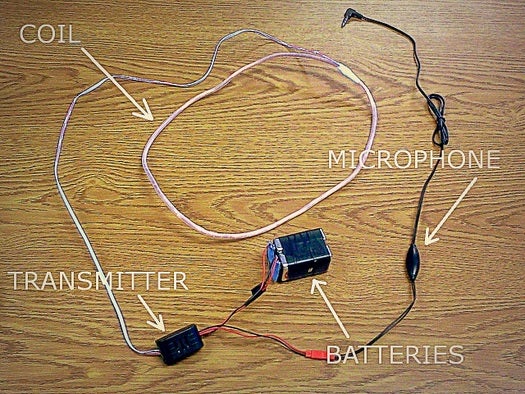 The Device Behind The Implants

So to listen to a song, Lee just presses play. That sends a current through the cord that quickly reaches the wire coil, and accordingly generates a corresponding magnetic field. Lee’s implants follow that field’s directions, and their ever-so-slight wobbles vibrate the air nearest his eardrum. Since sound is just vibrating air, and since his implants do exactly that–vibrate air–Lee’s eardrum and brain can interpret those motions as sound. The phenomenon at work is known as electromagnetic induction, and is also the reason we can both generate electricity with mechanical motion (i.e. generators) and turn sound into electrical currents (i.e. microphones).

“The sound quality is decent, maybe comparable to a cheap set of earbuds. It exceeded my expectations. I would have been happy with a muffled hum, since listening to music was not my primary motivation.” Lately, he has been listening to the Clash, though the first thing he heard through his implants was, fittingly, “a lecture by cybernetics pioneer professor Kevin Warwick being played on YouTube,” he says. He has also explored the implants’ more visceral side with his contact microphone, using it “like a stethoscope” to hear his wife’s heartbeat pulsing in his ears. He then tries to synchronize his own heartbeat with his wife’s, which, he says, is his “favorite thing to play around with thus far.”

His experiment is, so far, just that: an experiment. He’s needed to do some troubleshooting. “At this point I’m still testing different coil configurations, voltages, etc.,” he says, because at his current rate he’s draining two 9-volt batteries within an hour and frying a lot of amplifiers.

But the stakes are high. Parts of his cornea have thinned in spots, and fluids in the eye cause the thinned areas to bulge slightly, distorting the light–something glasses and contacts can’t correct, he says. By the end of each day, his one good eye is exhausted and blurry from working overdrive. Worse, it will likely meet the same fate as his right eye, he says. That’s where the implants’ power to echolocate comes into play. “I plan to hook this thing up to an ultrasonic rangefinder so that hums can be heard when objects get closer or further away,” he says. Echolocating wouldn’t be a panacea–the only real fix is a cornea transplant and, as he tells H+, “that is a bit out of my budget at the moment”–but it could help him visualize through sound a world he no longer sees.